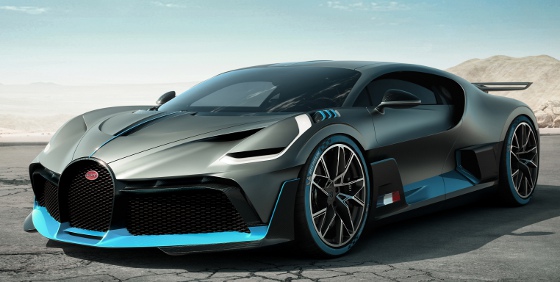 If owning a $3-million Bugatti Chiron hyper car -- the fastest and most powerful in the brand's history in 2019 -- is just too boring for you, the French carmaker has an almost $6-million extreme version called the Divo that could get you pumped. It takes Bugatti aerodynamics to new heights through exaggerated forms, and it adapts to customization so well that even if you bought a pair of Divos, they'd look like different cars.

Only 40 Divos will be made. The mid-engine, all-wheel-drive two-door coupe with a 7-speed DSG dual-clutch gearbox made its world design debut back in 2018, but the first units are just getting ready to roll off the line. Production is the slowest thing about the car. Featuring an 8-liter W16 engine with four turbochagers and two-stage turbocharging, the Divo does 0 to 100 km/h (62 mph) in 2.4 sec. Torque is 1,600 nm (2,000 to 6,000 rpm). 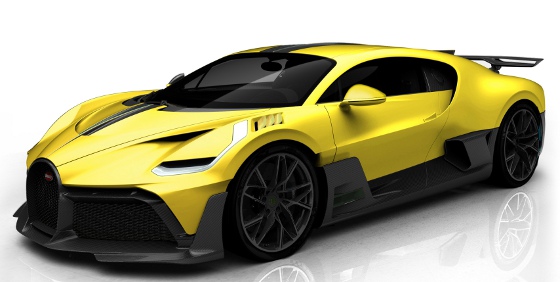 Bugatti says more than two-thirds of Divo purchasers decide to customize their cars, choosing their own colors and materials such as paint, leather, fabrics, and stitching. Three staff members are on hand to explain what is technically feasible, and the entire customization team is made up of 15 members. 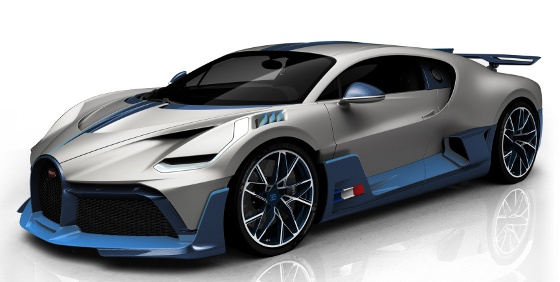 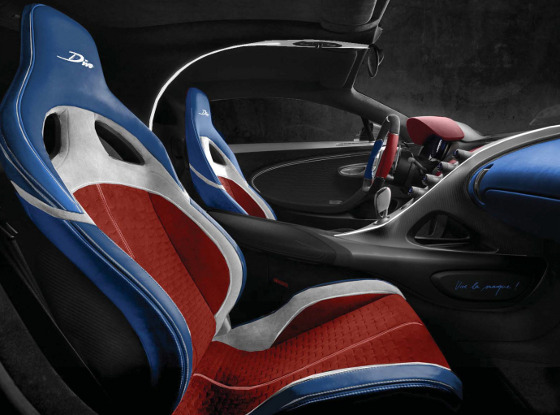 "Almost every wish that makes a Bugatti unique ... we can make it come true," says Laure Beneteau, the brand's sales and operations manager. Bugatti is really pushing customization on this one. From family crests to national flags and logos with personal meaning, to far-out paint techniques and vintage leathers, nothing is off the table -- as long as it does not affect the car's safety or aerodynamics. In addition to myriad interior options, the body color, centerline, roof, engine covers, and air intakes on the wings can also be painted special colors. Customers receive up-to-date photos every two weeks while their cars are being developed.

One main focus of the Divo project was to create a car with a completely different handling performance than the Chiron. For this, Bugatti was laser-focused on making an "agile and corner-hungry car."

The other aim involved design changes that not only supported the new aerodynamics but also made the car unique style-wise in both obvious (that huge wing, for example) and subtle ways. 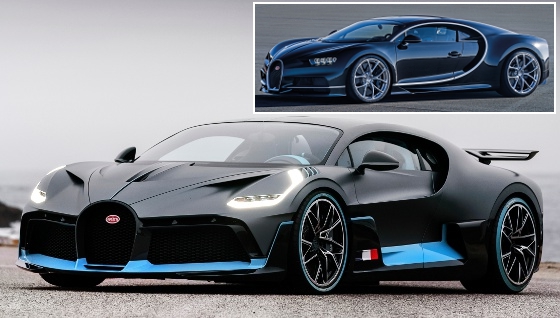 Bugatti Divo (main image) with Bugatti Chiron (inset) for comparison (Chiron does have a small wing, but it is in the down position in this photo). [All images courtesy: Bugatti]

During two years of development, Bugatti engineers took the Divo out on various testing grounds, winding roads, and race tracks such as the Nurburgring Nordschleife. For chassis development alone, they ran more than 5,000 km (3,106 miles) of testing across all speed ranges up to 380 km/h (236 mph, the car's limited top speed) in the three drive modes: EB (Auto, for everyday driving), Motorway, and Handling. They adjusted the setup again and again, refining it until all parameters were perfectly matched and the Divo's agility could no longer be increased.

Creating a super-agile car was achieved by using less weight, more downforce, and a more direct chassis setup. This included a change from the Chiron in wheel camber on the front and rear axles, harder springs, and a more front-oriented balance. In addition, the Divo has shed a total of 35 kg (77 lb) in weight as compared to the Chiron thanks to systematic lightweight construction.

The engineers made full use of the weight reduction to increase downforce, going to the limit of the tires' load capacity. This means the Divo has 90 kg more downforce -- an increase to 456 kg (1,005 lb) at top speed. The result is significantly higher cornering speeds. All in all, the lateral acceleration of the Divo was increased to 1.6 g (1.5 g for Chiron). When the Divo was tested at the Nardo testing ground in southern Italy, it completed the handling circuit 8 seconds faster than the Chiron -- a real accomplishment for the Bugatti engineers. 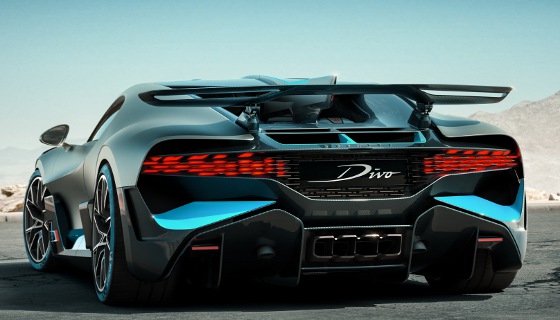 "The Divo is entirely different to drive than the Chiron," says Lars Fischer, head of chassis testing and application at Bugatti, "even though both are fitted with the powerful W16 engine. This is particularly evident when driving on roads with plenty of bends. With even more precise steering and greater downforce, the Divo drives through corners even faster and more predictably." However, it's still well suited for everyday use, he says.

The design team under the direction of Achim Anscheidt configured the Divo's body form for lateral acceleration, focusing on optimum aerodynamic and thermodynamic efficiency. These included a slimmer sideline and additional air intakes for brake cooling. 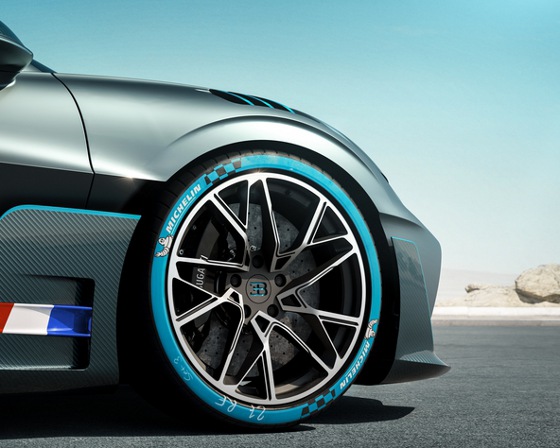 The front cover is equipped with air intakes that reduce the effective cross-sectional area of the vehicle at the same time as ensuring improved air flow at the front and increasing aerodynamic efficiency. An optimized "air curtain" makes for better air flow over the front and rear sections of the car's sides. 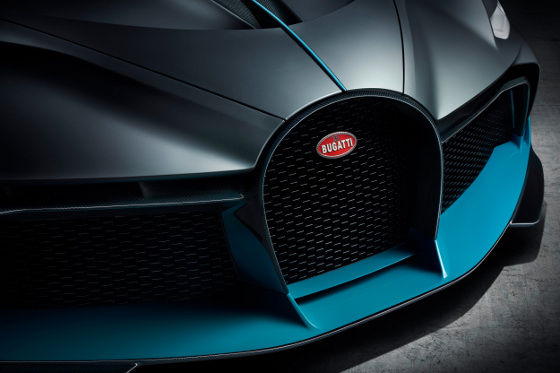 The brakes are cooled by four independent air sources on each side of the vehicle: Air flows in from the high-pressure area above the front bumper, the inlets on the front wings, one inlet on the front radiator, and the diffusers ahead of the tires. Vanes direct the cold air from these areas onto the brake discs. A heat shield carries the hot air out through the wheels. This means that the brakes do not overheat and the tire temperature is always kept in the optimum range. This system, which is already used on the Chiron, receives additional support from the vacuum generated by the air curtain on the tires for the Divo. In addition, the wheel arches are ventilated via slats on the wings. 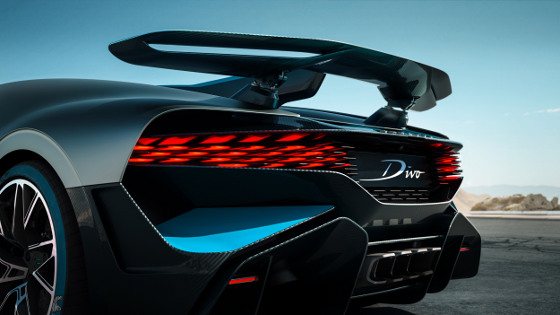 The rear end of the Divo features a new, height-adjustable rear spoiler that functions as an air brake when turned forward and is set to different angles for the individual driving modes. The rear spoiler has a width of 1.83 m (72 in.), making it 23 percent wider than on the Chiron. Bugatti says the wider spoiler improves efficiency and results in higher air brake performance as well as significantly more downforce.

The downforce is also boosted by the rear diffuser, which has been entirely redesigned for greater efficiency and accommodates four tailpipes.

For the body design, the slimmer side line of the Divo helps make the vehicle look lower and longer. The long, domed areas with their smooth surfaces along the C-pillar and the rear side sections optically shift the driver's cab forward. This gives the Divo an extremely dynamic appearance even when the vehicle is standing still. The lower part of the sides has more of a functional, technical design, featuring exposed carbon fiber that can be tinted.

An entirely new architecture was developed for the front of the car. The new, vertically oriented front lights with daytime running light on the outer edge give the Divo a wider appearance. The extremely compact and lightweight LED headlights with a flat light aperture of only 35 mm (1 3/8 in.) are particularly noticeable. 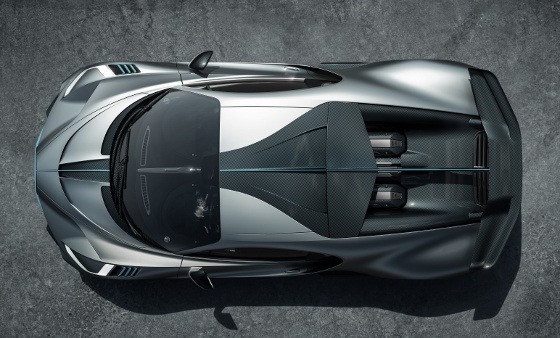 The NACA air inlet on the roof creates an optical connection with the air outlet in the center of the front cover and guides the air toward the rear spoiler. The fact that the central line runs from the front over the roof to the rear spoiler is not only a nod to Bugatti's past designs (1936 Bugatti Type 57 SC Atlantic) but also serves a function. This configuration prevents air eddies from forming over the vehicle, creating turbulence on the rear spoiler.

One highlight at the rear of the vehicle is definitely the new, highly sophisticated 3D rear light, made up of huge, spiked crystals. These form part of the rear grille, which is partly produced using a 3D-printing process and has special lightweight fins. A total of 44 of these fins illuminate to form the tail light system. 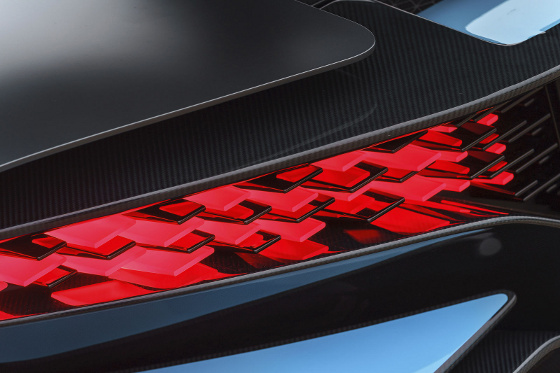 Another stylistic link between interior and exterior is created by the door trims and seat areas, which feature an embroidered 3D rhomboid structure with an algorithmic configuration, reinterpreting the structure of the grille and rear lights.

In the interior, new sports seats with higher side bolsters hold the occupants securely in their seats even when cornering at very high speeds. The steering wheel is partially covered in Alcantara and has enlarged steering wheel-mounted shift paddles on both sides. 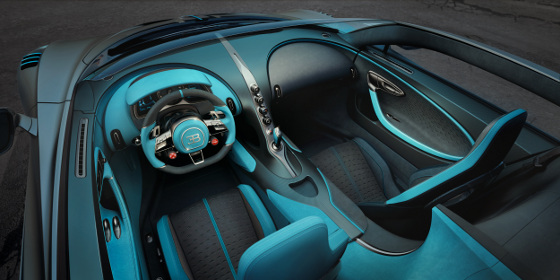 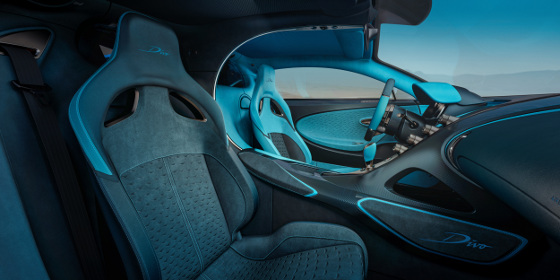 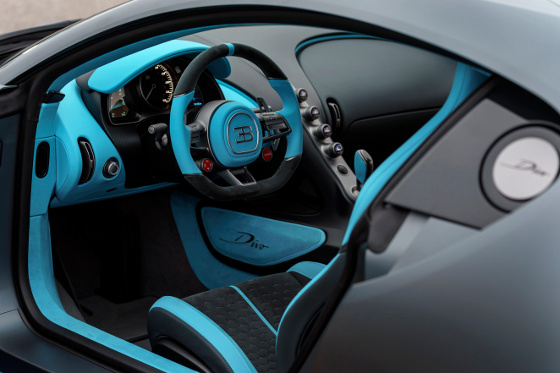 The Divo was named after Albert Divo, a legendary French racecar driver who had his greatest successes with the Bugatti racing team from 1928 to 1935.

AutoMotoTube has provided a pretty thorough walkaround of a Divo design model at the 2019 Dubai Motor Show. You can see it here.