Reconfigurable robot a step toward something that can become almost anything. 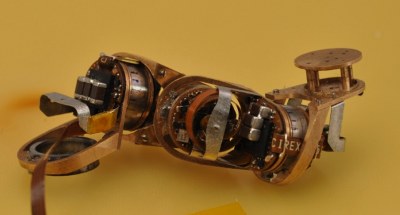 A four-segment milli-motein chain with a one-centimeter module size. [Image: Center for Bits and Atoms]

The device doesn't look like much: a caterpillar-sized assembly of metal rings and strips resembling something you might find buried in a home-workshop drawer. But the technology behind it, and the long-range possibilities it represents, are quite remarkable.

The little device is called a milli-motein -- a name melding its millimeter-sized components and a motorized design inspired by proteins, which naturally fold themselves into incredibly complex shapes. This minuscule robot may be a harbinger of future devices that could fold themselves up into almost any shape imaginable.

The device was conceived by Neil Gershenfeld, head of MIT's Center for Bits and Atoms, visiting scientist Ara Knaian and graduate student Kenneth Cheung, and is described in a paper presented recently at the 2012 Intelligent Robots and Systems conference. Its key feature, Gershenfeld says: "It's effectively a one-dimensional robot that can be made in a continuous strip, without conventionally moving parts, and then folded into arbitrary shapes."

To build the world's smallest chain robot, the team had to invent an entirely new kind of motor: not only small and strong, but also able to hold its position firmly even with power switched off. The researchers met these needs with a new system called an electropermanent motor.

The motor is similar in principle to the giant electromagnets used in scrapyards to lift cars, in which a powerful permanent magnet (one that, like an ordinary bar magnet, requires no power) is paired with a weaker magnet (one whose magnetic field direction can be flipped by an electric current in a coil). The two magnets are designed so that their fields either add or cancel, depending on which way the switchable field points. Thus, the force of the powerful magnet can be turned off at will -- such as to release a suspended car -- without having to power an enormous electromagnet the whole time.

In this new miniature version, a series of permanent magnets paired with electromagnets are arranged in a circle; they drive a steel ring that's situated around them. The key innovation, Knaian explains, is that "they do not take power in either the on or the off state, but only use power in the changing state," using minimal energy overall.

The milli-motein concept follows up on a paper, published last year, that examined the theoretical possibility of assembling any desired 3-D shape simply by folding a long string of identical subunits. That paper, co-authored by Cheung, MIT professor Erik Demaine, alumnus Saul Griffith, and former Computer Science and Artificial Intelligence Laboratory research scientist Jonathan Bachrach, proved mathematically that it was possible for any 3-D shape to be reproduced by folding a sufficiently long string -- and that it's possible to figure out how to fold such a string, and the exact steps needed to successfully reach the desired endpoint.

"We showed that you could make such a universal system that's very simple," Cheung says. While he and his colleagues have not yet proved a way of always finding the optimal path to a given folded shape, they did find several useful strategies for arriving at practical folding sequences.

Demaine points out that the folding of the shape doesn't have to be sequential, moving along the string one joint at a time. "Ideally, you'd like to do it all at once," he says, with each of the joints folding themselves to the desired configuration simultaneously so that the loads are distributed.

Other researchers, including some at MIT, have explored the idea of fashioning reconfigurable robots from a batch of separate pieces that could self-assemble into different configurations -- an approach sometimes called "programmable pebbles." But Gershenfeld's team found that a string of subunits capable of folding itself into any shape could be simpler in terms of control, power and communications than using separate pieces that must find each other and assemble in the right order. "You can just pass signals down the chain," Knaian says.

It's part of an overall approach, Gershenfeld explains, to "turning data into things." In an article in the current issue of the magazine Foreign Affairs, he describes a technology roadmap for accomplishing that, and its policy implications. He and his colleagues have established a global network of more than 100 "fab labs" that provide community access to computer-controlled fabrication tools. Today, the design information is contained in an external computer rather than in the materials being manufactured, but the research goal is to digitize the materials themselves so that they can ultimately change their own shape, as the milli-motein does.

Hod Lipson, an associate professor of mechanical and aerospace engineering and computing and information science at Cornell University, says, "This result brings us closer to the idea of programmable matter -- where computer programs and materials merge to form a new kind of matter whose shape and function can be programmed -- not unlike biology. Many people are excited today to learn about 3-D printing and its ability to fabricate any shape; Gershenfeld's group is already thinking about the next episode, where we don't just control the shape of objects, but also their behavior."

The milli-motein is part of a family of such devices being explored at size scales ranging from protein-based "nanoassemblers" to a version where the chain is as big as a person, Gershenfeld says. Ultimately, a reconfigurable robot should be "small, cheap, durable and strong," Knaian says, adding that right now, "it's not possible to get all of those." Still, he points out, "Biology is the existence proof that it is possible."

The MIT researchers' work could lead to robotic systems that can be dynamically reconfigured to do many different jobs rather than repeating a fixed function, and that can be produced much more cheaply than conventional robotics.

The development of the milli-motein was supported by the U.S. Defense Advanced Research Projects Agency's Maximum Mobility and Manipulation and Programmable Matter projects.