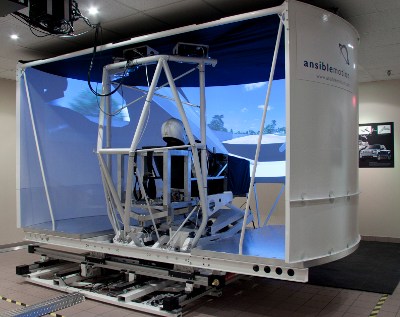 As automotive manufacturers compete on features of efficiency and safety, they are also battling to provide the best driving experience for their customers. As a result, vehicle engineering is becoming more complex, involving multiple disciplines. There is a growing desire to provide test drivers and evaluators with simulated driving experiences, so that their feedback can be incorporated early in the design process. Based on this, automakers are introducing a new element in the complex assessment process between virtual prototyping and vehicle on-road testing.

With support from Maplesoft, VI-grade, an engineering simulation software provider, has produced the award-winning, breakthrough driving simulator technology called VI-DriveSim Dynamic. This high-end driving simulator allows automotive OEMs and racing teams to test full-vehicle configurations, from the engine through the transmission to the suspension and tires, using a human driver and a virtual vehicle.

Very often, test drivers and track engineers cannot sufficiently influence the vehicle design, because their feedback comes far too late in the prototyping process. VI-DriveSim Dynamic enables the implementation of a new validation stage in the design cycle by letting real drivers drive the virtual car. Driver feedback can then be taken into account and improvements made before any expensive physical prototypes are built. The simulator needs to be so accurate that the most sensitive professional driver can feel the smallest change in vehicle performance.

The VI-DriveSim Dynamic simulator works by running a virtual mathematical model of the vehicle and track, and linking it to a 6-degree-of-freedom motion platform designed expressly for automotive requirements by Ansible Motion. The inputs to the virtual model are supplied by actions of the human driver in the simulator as he shifts, steers, brakes, and accelerates. In turn, the platform controller provides real-time input to the platform actuators, according to what happens to the vehicle model as it responds to the inputs. The physical simulator platform thus provides inertial feedback to the driver, allowing him/her to interact in a natural way with the virtual vehicle model.

An inverse kinematics/dynamics model of the motion platform is required so the software knows what changes to the platform will produce the correct forces on the driver to simulate the vehicle in motion. The challenge here is to acquire these inverse relationships, which will provide the most accurate response of the system. To accomplish this, Ansible Motion used Maplesoft's system-level modeling and simulation tool, MapleSim, to build the platform model, and to analytically solve for the inverse kinematic equations. Having access to these equations is crucial, and this could not have been achieved without a symbolic/analytical computational engine such as Maple, the mathematical engine behind MapleSim. In effect, MapleSim gives the controller an exact analytical solution for the inverse kinematics, giving the best possible simulation.

"Driving simulator technology is emerging as an integral part of the vehicle development process for motorsports teams and production vehicle manufacturers," says Kia Cammaerts, technical director, Ansible Motion. "MapleSim was a big part of our ability to develop this technology. Our team would not have been able to efficiently develop our systems for VI-Grade or our other clients without a tool such as MapleSim, which we used to develop the inverse kinematic solutions for the actuators, saving us months of painstaking, error-prone effort."

"The combination of MapleSim and VI-CarRealTime allows for the fast, accurate modeling of automotive subsystems, such as powertrains, suspensions, and steering mechanisms," says Paul Goossens, vice president of Applications Engineering at Maplesoft. "Automotive engineers can easily do innovative work, exploring their designs in new and deeper ways, detecting problems earlier in the design cycle, and developing high-quality, practical solutions to their design challenges."

VI-DriveSim Dynamic has been awarded "Development Tool of the Year 2012" by Vehicle Dynamics International Magazine. The prestigious award was given to VI-DriveSim Dynamic out of a short list of finalists through a voting process by an international and independent judging panel composed of 15 automotive professionals.