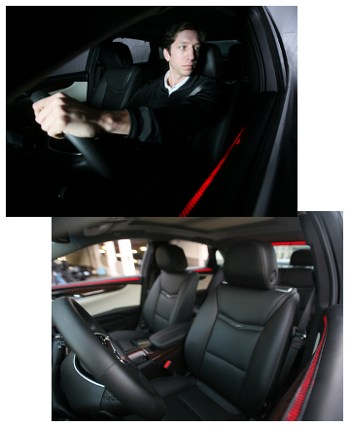 Continental's driver focus concept vehicle recognizes driver distraction and is able to direct the driver's attention toward a dangerous situation. The system uses light signals in an LED strip that surrounds the whole of the vehicle interior.

Driver distraction is a global traffic problem. In the United States alone, an average of 10 people are killed and more than 1,100 people are injured every day as a result of accidents caused by distracted drivers, according to the U.S. Department of Transportation (USDOT).

Automotive supplier Continental is trying to have a hand in changing these statistics. Its "driver focus" concept vehicle features driver-assistance systems that are linked to a highly versatile LED light strip to create an effective tool against driver distraction. It's a real in-cabin light show.

Modern driver-assistance systems, such as lane-keeping assist, adaptive cruise control, and collision warning systems, also help defuse dangerous traffic situations in the driver focus vehicle. In addition, an infrared camera in the vehicle interior detects where the driver is looking -- so the driver focus vehicle "knows" whether drivers can actually see a dangerous situation or whether they are currently distracted.

Thanks to an LED light strip, the driver focus vehicle makes the driver intuitively aware of a dangerous situation. The LED light strip surrounding the entire vehicle interior uses situation-dependent light signals to guide the driver's line of vision toward the source of danger. The warning and activation of the driver assistance systems are therefore directly tailored to the driving situation and the driver's state of attention. Sound like overkill to you?

"With the driver focus vehicle, drivers have at their side a digital co-pilot that constantly scans the vehicle surroundings and specifically warns drivers when they appear to have overlooked a danger," says Helmut Matschi, member of the Continental AG Executive Board and head of the Interior division. "The driver focus vehicle clearly illustrates the role that continuous integration of new technologies is playing in further reducing the risk of an accident. With our concept vehicle, we show that we take the danger of driver distraction seriously and are expanding our involvement in developing interior technologies. We have powerful strategies for dealing with driver distraction in our portfolio and will continue bringing these into series production step by step."

"Human error is the single cause for about 80 percent of traffic accidents. Driver distraction is a serious issue and plays a major role. The reasons are complex and range from driver drowsiness and monotonous driving situations to increased driver stress and information overload," says Dr. Ralf Cramer, executive board member and president of the Chassis & Safety division, Continental. "To combat these realities, Continental utilizes active safety technology to advise drivers of the dangers and assist if necessary."

The driver focus vehicle uses an infrared interior camera to detect where drivers are focusing their attention. Situated in the steering column, this camera monitors the driver's face for eye and head movements, for example. This way, Continental developers reason, the vehicle electronics can detect whether drivers are fatigued or whether their eyes are not on the road in a critical driving situation. With the help of the LED light strip, the driver's attention is steered toward the dangerous situation.

On the one hand, the light strip is connected to the infrared interior camera that detects whether the driver is distracted. On the other hand, it is linked up to the various driver assistance systems in order to identify critical situations.

For example, if the infrared camera detects that drivers have taken their eyes off the road while approaching a potential danger zone, the LED light strip is activated. The LEDs can produce a trail of light, a flashing wall, or a different light signal. The drivers pick up on this in their peripheral vision and almost instinctively focus their attention in the desired direction. The LED light strip can take on any color depending on the level of danger, from white to yellow to bright red. This approach was developed by Continental in cooperation with the Technische Universitat Darmstadt (Technical University of Darmstadt, Germany) as part of the PRORETA 3 research project that deals with the development of an integral concept for an innovative driver safety system and advanced driver assistance system to prevent accidents and reduce the consequences of accidents in city traffic scenarios.

Driver assistance systems detect danger
The Continental concept vehicle accesses various advanced assistance systems already in series production to take in the vehicle surroundings. In the driver focus vehicle, the lane-keeping assist feature specifically warns drivers when they are not paying attention to the traffic situation. It avoids unnecessary warnings, which in turn minimizes any additional driver distractions. However, the driver can always rely on the warning system.

The interaction between the adaptive cruise control feature and the human-machine interface is also expanded in the driver focus vehicle. The adaptive cruise control uses radar information to keep a desired distance from the vehicle in front. If the traffic situation requires particularly hard braking, a warning is displayed in the instrument cluster or head-up display. In the driver focus vehicle, it is now impossible for the driver to miss these warning messages because the LED light strip specifically signals toward the necessary braking maneuver.

The interaction with the collision warning system is, admittedly, pretty impressive. The driver's line of vision is analyzed before a collision warning is given. This means warnings occur in a more targeted manner. For example, if the driver is paying attention to the road, the warning can be suppressed until the situation becomes highly critical. Conversely, the vehicle can give an immediate warning if the driver is not paying attention, even when the situation has not yet reached a critical level. At the same time, the driver's attention is directed in the essential direction.

Detecting distraction and letting the car drive itself: The future is automated
The connection of driver assistance systems, the capturing of the vehicle's environment, and an interior camera will play a key role on the path toward automated driving. If the vehicle detects that the driver is distracted, it can offer to take over driving for certain traffic situations. According to Continental, the driver letting the vehicle drive semi-automated in certain situations may happen as early as 2016, such as in stop/start traffic traveling under 20 mph on a motorway. If the driver has to take back control because the traffic is picking up again, the LED light strip could direct the driver's attention back to the traffic.