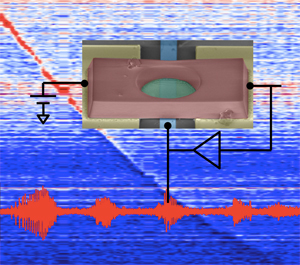 "This work is significant in that it demonstrates an application of graphene that cannot be achieved using conventional materials," Hone says. "And it's an important first step in advancing wireless signal processing and designing ultra-thin, efficient cell phones. Our devices are much smaller than any other sources of radio signals and can be put on the same chip that's used for data processing."

Graphene, a single atomic layer of carbon, is the strongest material known to man and also has electrical properties superior to the silicon used to make the chips found in modern electronics. The combination of these properties makes graphene an ideal material for nanoelectromechanical systems (NEMS), which are scaled-down versions of the microelectromechanical systems (MEMS) used widely for sensing of vibration and acceleration. For example, Hone explains, MEMS sensors figure out how your smartphone or tablet is tilted to rotate the screen.

In this new study, the team took advantage of graphene's mechanical "stretchability" to tune the output frequency of their custom oscillator, creating a nanomechanical version of an electronic component known as a voltage controlled oscillator (VCO). With a VCO, explains Hone, it is easy to generate a frequency-modulated (FM) signal, exactly what is used for FM radio broadcasting. The team built a graphene NEMS whose frequency was about 100 megahertz, which lies right in the middle of the FM radio band (87.7 to 108 MHz). They used low-frequency musical signals (both pure tones and songs from an iPhone) to modulate the 100-MHz carrier signal from the graphene and then retrieved the musical signals again using an ordinary FM radio receiver.

"This device is by far the smallest system that can create such FM signals," says Hone.

While graphene NEMS will not be used to replace conventional radio transmitters, they have many applications in wireless signal processing. Explains Shepard, "Due to the continuous shrinking of electrical circuits known as Moore's Law, today's cell phones have more computing power than systems that used to occupy entire rooms. However, some types of devices, particularly those involved in creating and processing radio-frequency signals, are much harder to miniaturize. These 'off-chip' components take up a lot of space and electrical power. In addition, most of these components cannot be easily tuned in frequency, requiring multiple copies to cover the range of frequencies used for wireless communication."

Graphene NEMS can address both problems: they are very compact and easily integrated with other types of electronics, and their frequency can be tuned over a wide range because of graphene's tremendous mechanical strength.

"There is a long way to go toward actual applications in this area," notes Hone, "but this work is an important first step. We are excited to have demonstrated successfully how this wonder material can be used to achieve a practical technological advancement -- something particularly rewarding to us as engineers."

The Hone and Shepard groups are now working on improving the performance of the graphene oscillators to have lower noise. At the same time, they are also trying to demonstrate integration of graphene NEMS with silicon integrated circuits, making the oscillator design even more compact.

For this study, the team worked with research groups from the school's Departments of Mechanical Engineering, Electrical Engineering, and Physics. This work is supported by Qualcomm Innovation Fellowship 2012 and the U.S. Air Force, using facilities at the Cornell Nano-Scale Facility and the Center for Engineering and Physical Science Research (CEPSR) Clean Room at Columbia University.