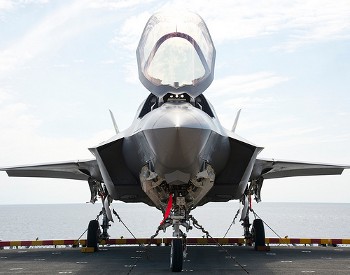 An F-35B test aircraft on the deck of the USS Wasp for Developmental Test Phase Two in August 2013. [Photo: ©Lockheed Martin]

Through its Manufacturing Technology (ManTech) program, the Office of Naval Research (ONR) has invested in an automated thermoforming process that could cut costs by as much as $125 million over the course of the Joint Strike Fighter program.

"This is a great example of how the naval science and technology community delivers affordability along with cutting-edge results," said Vice Adm. Joseph P. Aucoin, deputy chief of naval operations for Warfare Systems. "Research like this also can produce a high return on investment across other warfighting domains."

An F-35 canopy, the term used to describe the transparent enclosure over the cockpit, has an unusual shape and specialized material that make the manufacturing process more complex than that for other aircraft. 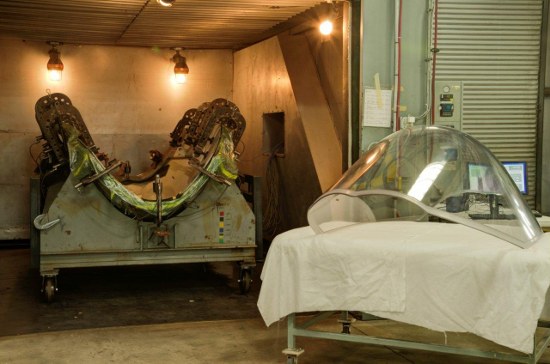 Now what used to take up to six days to make will take only four days or less. The new automated process also will require fewer tools and help avoid costs when aircraft require replacement canopies.

Currently, skilled technicians load a preformed acrylic shell into a forming tool and put it in an oven where it heats at 200 deg F or more for up to six days. During that time, workers regularly enter the oven to observe the canopy's progress and manually adjust positioning clamps to control the forming process. Managing this process is critical for optimal canopy performance.

The new cost-effective method employs a control system with four cameras that can see inside the oven to calculate the rate at which the canopy's shape is forming. The clamps then automatically adjust to ensure the shape remains uniform throughout the process to meet the F-35's stringent performance requirements.

"We took an intensive, manual, time-consuming process and improved it to be more precise and efficient," said Neil Graf, program officer for ONR ManTech. "That's what Navy's ManTech program does: We look at ways to reduce manufacturing costs on aircraft, ships, and submarines to save the taxpayer money."

The new method supports the Chief of Naval Operations' Navigation Plan that calls for the service to continue efforts to make investments to address near-term challenges and develop future capabilities even in the face of budget constraints.

GKN Aerospace Transparency Systems, in coordination with the F-35 Program Office, plans to implement the new process as early as 2014, producing initial and spare canopies for more than 2,000 planned and delivered aircraft.

The Department of Defense's Joint Strike Fighter program is developing the next generation of affordable, lethal strike aircraft. The F-35 is being manufactured in three variants: an aircraft-carrier version for the Navy, a conventional take-off and landing jet for the Air Force, and a short-takeoff/vertical-landing version for the Marine Corps.