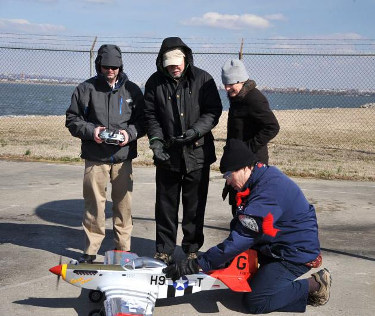 Navy researchers at the U.S. Naval Research Laboratory (NRL), Materials Science and Technology Division, have demonstrated a proof-of-concept technology by flying a radio-controlled scale-model airplane with fuel derived from seawater.

Fueled by a liquid hydrocarbon -- a component of NRL's novel gas-to-liquid (GTL) process that uses CO2 and H2 as feedstock -- the research team demonstrated sustained flight of an RC P-51 replica of the legendary Red Tail Squadron (Tuskegee Airmen), powered by an off-the-shelf (OTS) and unmodified two-stroke internal combustion engine.

Using an innovative and proprietary NRL electrolytic cation exchange module (E-CEM), both dissolved and bound CO2 are removed from seawater at 92 percent efficiency by re-equilibrating carbonate and bicarbonate to CO2 and simultaneously producing H2. The gases are then converted to liquid hydrocarbons by a metal catalyst in a reactor system.

"In close collaboration with the Office of Naval Research P38 Naval Reserve program, NRL has developed a game-changing technology for extracting, simultaneously, CO2 and H2 from seawater," said Dr. Heather Willauer, NRL research chemist. "This is the first time technology of this nature has been demonstrated with the potential for transition, from the laboratory to full-scale commercial implementation." 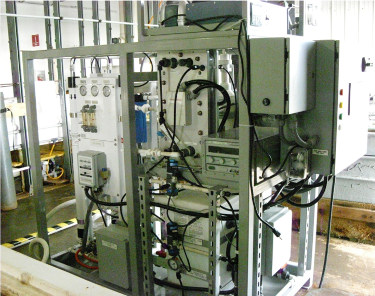 CO2 in the air and in seawater is an abundant carbon resource, but the concentration in the ocean (100 mg/L) is about 140 times greater than that in air, and 1/3 the concentration of CO2 from a stack gas (296 mg/L). Two to three percent of the CO2 in seawater is dissolved CO2 gas in the form of carbonic acid, one percent is carbonate, and the remaining 96 to 97 percent is bound in bicarbonate.

NRL has made significant advances in the development of a gas-to-liquids (GTL) synthesis process to convert CO2 and H2 from seawater to a fuel-like fraction of C9-C16 molecules. In the first patented step, an iron-based catalyst has been developed that can achieve CO2 conversion levels up to 60 percent and decrease unwanted methane production in favor of longer-chain unsaturated hydrocarbons (olefins). These value-added hydrocarbons from this process serve as building blocks for the production of industrial chemicals and designer fuels.

In the second step, these olefins can be converted to compounds of a higher molecular using controlled polymerization. The resulting liquid contains hydrocarbon molecules in the carbon range, C9-C16, suitable for use a possible renewable replacement for petroleum-based jet fuel.

The predicted cost of jet fuel using these technologies is in the range of $3 to $6 per gallon, and with sufficient funding and partnerships, this approach could be commercially viable within the next seven to 10 years. Pursuing remote land-based options would be the first step toward a future sea-based solution.

The minimum modular carbon capture and fuel synthesis unit is envisioned to be scaled up by the addition of individual E-CEM modules and reactor tubes to meet fuel demands.

Video caption: Navy researchers demonstrate their proof of concept in the first flight of an internal combustion-powered model aircraft fueled by a novel gas-to-liquid process that uses seawater as carbon feedstock.

NRL operates a lab-scale fixed-bed catalytic reactor system, and the outputs of this prototype unit have confirmed the presence of the required C9-C16 molecules in the liquid.

This lab-scale system is the first step toward transitioning the NRL technology into commercial modular reactor units that may be scaled up by increasing the length and number of reactors.

The process efficiencies and the capability to simultaneously produce large quantities of H2, and process the seawater without the need for additional chemicals or pollutants, has made these technologies far superior to previously developed and tested membrane and ion-exchange technologies for recovery of CO2 from seawater or air.