The Giant Magellan Telescope project has successfully passed two major reviews, completing its detailed design phase and positioning the project to enter the construction phase. Taking advantage of the world's most advanced mirrors -- designed and built at the University of Arizona -- the 25-m telescope will have more than six times the light-gathering area of the largest telescopes today and 10 times the resolution of the Hubble Space Telescope. 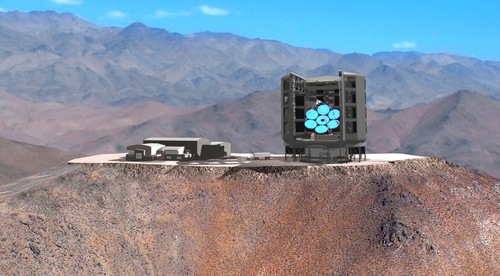 The Giant Magellan Telescope is slated to begin operations atop a mountain in Chile's Atacama Desert in 2020.

Scientists will use the GMT to explore distant and potentially habitable planets around other stars, to explore the universe in the first billion years after the Big Bang, and to probe the mysteries of dark matter, dark energy, and massive black holes. It will be located at the Las Campanas Observatory in Chile, atop a remote mountain peak in the Chilean Andes.

During a weeklong review in mid-January, an international panel of experts examined the design of the giant telescope, including its complex optical systems and precision scientific instruments. This panel was made up of experts involved in building telescopes around the world. The panel concluded the project meets the technical readiness required to proceed to construction. Immediately following the design review, a team of construction experts signed off on the project's cost estimate and management plan.

Richard Kurz, former project manager for the Atacama Large Millimeter/submillimeter Array and chair of the external panel that reviewed the GMT project noted that the panel enthusiastically recommended that the GMT project "proceed as rapidly as possible to construction." ALMA, which stands for Atacama Large Millimeter/submillimeter Array, is an array of 66 radio telescopes located in the dry and cloudless Atacama Desert in Chile.

Wendy Freedman, chair of the GMT Organization's Board of Directors and Director of the Carnegie Observatories, said the reviews were critical milestones required by the GMTO board to proceed with the construction phase.

"Along with the successful casting of the first three 8.4-meter primary mirrors and the leveling of the mountaintop in Chile, each step brings us closer to construction," Friedman said.

As in most telescopes, the primary mirror is the heart of the telescope, and its properties dictate much of the telescope design. The UA's Steward Observatory Mirror Lab developed a unique fabrication process resulting in a lightweight honeycomb glass structure. Not only are these mirrors the largest ever made -- and light enough to float in water -- but they also are very stiff and quickly adjust to changes in nighttime air temperature, all of which result in sharper images. GMT's third mirror was unveiled just this past December.

Like other mirrors produced by the Mirror Lab, the GMT mirrors are fabricated in a process called spin casting, thereby achieving the basic front surface in the shape of a paraboloid. A paraboloid is the shape taken on by water in a bucket when the bucket is spun around its axis; the water rises up the walls of the bucket while a depression forms in the center. 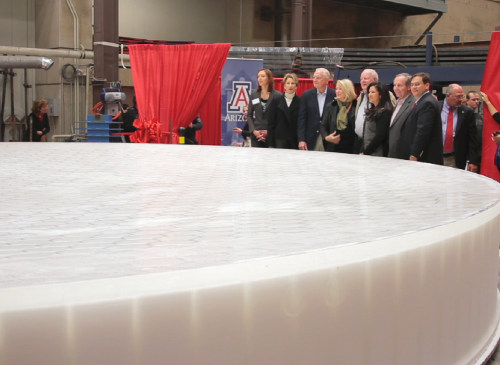 In the case of the GMT, however, six mirrors will be arranged around a seventh in the center, in a design called off-axis, thus serving as off-axis segments of one giant mirror. This design requires the shape of the outer mirrors to be asymmetric in profile. Picture the spinning bucket of water again, but with the depression forming off to one side this time.

Because of their off-axis design and asymmetrical shape, these mirrors are more challenging to polish, and to measure, than any telescope mirror made before. The mirror surface must match the ideal off-axis shape to an accuracy of 25 nanometers, or one-millionth of an inch. The GMT project recognized the need to demonstrate this capability as early as possible. The first off-axis mirror was completed in October 2012.

"Finishing the first GMT mirror is a huge milestone for the Mirror Lab," said Buddy Martin, a project scientist at the Mirror Lab and for the GMT, and an associate research scientist in the UA College of Optical Sciences. "This project builds on all the technology we've developed over 25 years for many telescopes, but required new methods and equipment that extend the state of the art in several ways. We now have all the technology in place to make the rest of the GMT mirrors."

Measuring 360 m2, or about 3,900 ft2, the GMT's seven mirrors combine to form an area just a bit smaller than a basketball court.

"This is an exciting time for space sciences at the UA as we look forward to the completion of GMT and its ability to enable exploration of Earth-type planets around nearby stars to the most distant galaxies," said Buell Jannuzi, head of the UA Department of Astronomy and Steward Observatory. "Being part of what will be the world's leading ground-based telescope will continue the UA's leadership in astronomy and astrophysics in the coming decades."

Board members representing the partner research institutions that make up the GMT consortium will meet this summer to review the construction plan.

Mirror production at the Mirror Lab is well underway with three of the off-axis mirrors cast and in various stages of grinding and polishing, and the center mirror expected to be cast in early 2015. The GMT will become operational and begin collecting data in 2020.