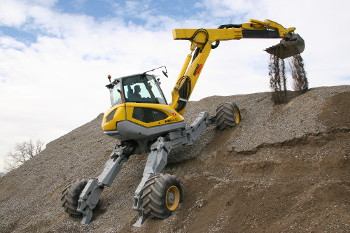 The new walking excavator series from Menzi Muck offers drivers some interesting additional functions -- thanks to the LSC hydraulics system from Linde Hydraulics.

The Swiss excavator manufacturer Menzi Muck unveiled the first model in its new walking excavator series last year at the bauma 2013 trade fair. The working hydraulics in these highly specialized construction machines are configured as a complete system of Linde Hydraulics components, including the electronic control unit.

Walking excavators -- also known as spider excavators -- are extremely specialized construction machines that move forward on four wheels, which are connected to the undercarriage by legs. These legs can also be used to adjust the track width and the height of the vehicle over a wide range of dimensions, ensuring that the machines remain highly flexible and can be adapted to the surrounding conditions, both in drive mode and work mode, when the stabilizers on the legs are extended. This means that they are ideally suited to working in locations such as very steep slopes or in streams.

Highly dynamic, superimposed movements
An appearance on German TV show "Wetten, dass ...?" in 2006 showed how flexible these machines can be. The impressive video is still available on YouTube and shows an early-model walking excavator from Swiss manufacturer Menzi Muck climbing over a five-meter-high concrete block -- using the bucket as additional support -- and proving just how appropriate the name "spider excavator" is.

Exploiting this great degree of freedom not only requires a very experienced driver, but also a powerful hydraulic system that can execute the often superimposed movements with the necessary dynamics or sensitivity. 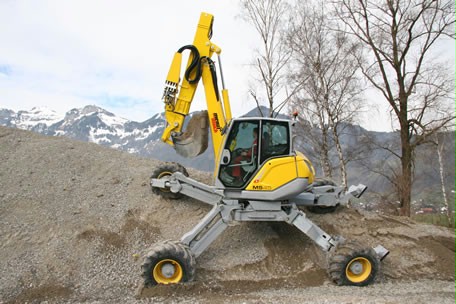 Joint development at a high level
During the development of its new series, the excavator manufacturer worked in close collaboration with Linde Hydraulics and Girtec AG, the Linde Hydraulics system partner based in Switzerland. Together, the companies developed a hydraulic system that utilizes the benefits of the Linde Synchron Control (LSC) and not only meets the demanding requirements of the highly specialized movements of a walking excavator, but also enables additional functions to be implemented. 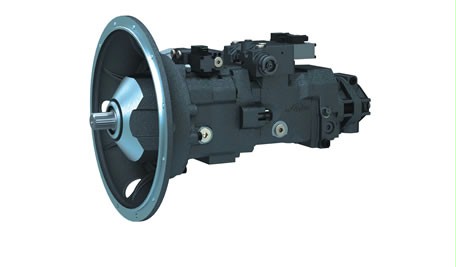 A tandem pump unit, consisting of a variable displacement pump and a regulating pump, supplies the working hydraulics and traction hydraulics.

Supply via tandem pump unit
At the core of the hydraulic system is a tandem pump unit. A load-sensing regulating pump of type HPR 105-02 E1L for the open circuit supplies the working hydraulics with hydraulic fluid, while an HPV 75-02 E2 variable displacement pump for the closed circuit drives the traction motors.

The hydraulic control functions are combined in the compact LSC monoblock.

The system is controlled via a compact LSC monoblock, in which three directional control valves are integrated in a single cast housing. The pressure-relief function is also integrated in the monoblock, and special functions can be implemented using an intermediate plate. The valves have a flow-optimized design and feature integrated pressure compensators and pressure copiers.

Social load sensing
The standout features of the LSC system include its "social load sensing" capability. This is a special kind of volume flow regulation for superimposed movements, which are frequently required for walking excavators. The relevant functions are supplied as required depending on how the driver moves the joystick, even if the requested flow volume exceeds the maximum possible pump flow rate. In this case, the available flow volume is divided amongst the consumers depending on their requirements.

Complete system with electronic control unit and joystick
The electronic control unit for the walking excavator's hydraulics also comes from the Linde Hydraulics modular system. It maps the complete traction hydraulics and working hydraulics of the new machine. The software developers at Linde have implemented some additional functions in the electronic control unit, including the option to select pre-configured drive programs, such as an "eco mode" where the walking excavator operates in a particularly energy-efficient manner. The joystick, which the operator uses to operate the hydraulic functions, comes from the product range of Linde Hydraulics' partner Girtec. This means that virtually the entire hydraulic system, including the control electronics and man-machine interface, comes from a single source.

Compact and powerful hydraulic system from a single source
Menzi Muck has already had positive experiences with hydraulic components and systems from Linde Hydraulics. When developing the new series, called the M 3/M 5, it was not only the reliability and flexibility of the LSC system that was of crucial importance, but also the high power density of the central components: The combination of an HPR and HPV pump is much more compact and powerful than competitors' systems.