The Air Force Global Strike Command (AFGSC) took delivery of a significantly enhanced Boeing B-52H Stratofortress in a ceremony at Barksdale Air Force Base in Louisiana on April 25.

The B-52H spent the previous 10 months at Tinker Air Force Base, OK, being refitted with the Combat Network Communications Technology, or CONECT, upgrade. This modification is designed to greatly improve the aircraft's utility in the modern battlespace and to keep the 50-year-old aircraft capable and lethal until at least 2040. 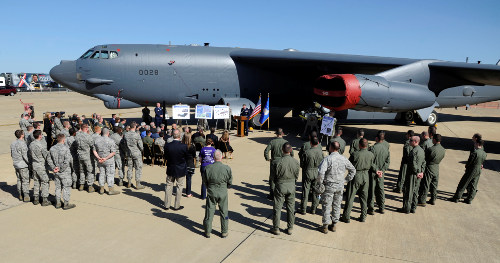 Barksdale Air Force Base members attend a ceremony in recognition of a B-52H Stratofortress at Barksdale AFB, LA. The B-52 is the first of its kind to receive a new Combat Network Communications Technology (CONECT) system, complete with state-of-the-art displays, servers, and communications uplinks. [U.S. Air Force photo: Senior Airman Joseph A. Pagan Jr.]

"The first CONECT B-52 we're about to receive is a major leap forward in advancing the BUFF [Big Ugly Fat Fellow] on the battlefield," said Maj. Gen. Scott A. Vander Hamm, the 8th Air Force commander.

The CONECT upgrades provide the B-52H with digital display screens, computer network servers, and real-time beyond-line-of-sight communication links, allowing crews to stay connected to the world throughout their mission, officials said. A combined air and space operations center can now provide the aircraft with constant updated threat and targeting data, rather than the crew and mission being dependent solely upon information that was available at takeoff.

"Over the past two decades, we've seen rapid advancements in technology, and that has really changed the way we operate on the battlefield, especially in the information environment," Vander Hamm said. "What hasn't changed is the need to advance our capabilities and integrate those technologies with information to provide our aircrew with the most up-to-date information and the ability to act on it."

The machine-to-machine interfacing introduced by CONECT also allows for rapid re-tasking and retargeting while eliminating potential human error, giving the B-52H the capability of conducting digitally aided close-support missions in coordination with tactical air control parties on the ground. This ability to make precise changes in an instant is critical in the quicksilver world of modern combat.

"It's the integration of these and other CONECT aspects that are increasing the combat capability of this old, but very formidable, aircraft," Vander Hamm said.

Another facet of CONECT is the addition of networking devices to the aircraft to act as a digital framework, allowing for easier incorporation of new technologies in the future, officials said.

Because CONECT requires making such extensive modifications to the aircraft, the upgrades can only be performed during Periodic Depot Maintenance, or PDM, at Tinker AFB. All aircraft are scheduled for PDM on four-year cycles.

According to officials, equipping a B-52H with CONECT requires nearly 7,000 man-hours to complete, or approximately nine months per aircraft. The Oklahoma City Air Logistics Complex at Tinker currently has the capacity to perform a maximum of 17 of these refits per year. All B-52Hs are scheduled to complete the upgrade by 2020.

"The B-52 is here to stay," Vander Hamm said. "CONECT is keeping us current, relevant, and credible in today's and tomorrow's fight."

The B-52H's first flight occurred in July 1960, and the aircraft was first entered into service in May 1961. The final production model of a 102-airplane manufacturing run left the factory in October 1962.