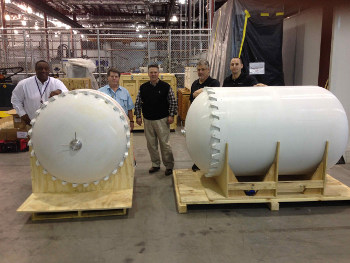 True innovators in aerospace know that fast development times and constant performance improvement are not the only essential qualities of a leader -- it takes thorough testing processes and the ability to control costs and reduce risk. One company accelerating innovation in aerospace is Lockheed Martin's Space Systems Company (SSC). The division designs, develops, tests, manufactures, and operates a full spectrum of advanced-technology systems for national security, civil, and commercial customers.

Validation of design
In early 2012, Lockheed Martin SSC began looking at ways to improve and add value to their satellite design. The goal was to design a satellite that would make more efficient use of space and increase the satellite's payload. It would require testing many assembly configurations and producing several simulators and prototypes to validate design changes. One change that needed to be validated was in the satellite's fuel tanks.

Before building the actual fuel tanks for final use, Lockheed would need to test form, fit, function, and assembly with tank simulators. Producing test parts with traditional manufacturing methods would not be realistic given the deadline and costs. Machining the larger tank at 6.75 ft x 3.8 ft x 3.8 ft and the second tank at 3.8 ft x 3.8 ft x 3.8 ft would take over six months and around $250,000. The recent advancements in large-scale 3D printing motivated Lockheed to turn to Stratasys' Fused Deposition Modeling (FDM) to make the tank simulators.

Lockheed Martin is no stranger to 3D printing technology. In fact, they are considered a 3D-printing leader for aerospace applications and own several additive manufacturing machines. But this particular application, part size, post-processing requirements, and project deadline posed a challenge for their in-house capacity. The parts would have to be built in many pieces and bonded together, requiring an army of machines and a team of FDM finishing experts. That's when they turned to RedEye's aerospace team. RedEye is a business unit of Stratasys, one of the world's largest providers of rapid prototyping and additive manufacturing services.

Constructing the tanks
Lockheed Martin has partnered with RedEye over the last several years to manufacture parts and often comes to RedEye when size, material, or machine capacity limit their in-house additive manufacturing systems. Lockheed knew RedEye would deliver high-quality parts on time and offered the engineering thermoplastic and finishing processes required for the form, fit, and function tests.

"We chose RedEye because they have the machines and finishing capabilities to build tanks of this size," said Andrew Bushell, senior manufacturing engineer at Lockheed Martin SSC. "We also decided to go with RedEye for their speed and engineering support we had received on past projects."

When RedEye's aerospace team received design files from Lockheed's engineers, they were stunned with the size of the tanks. "These are the largest parts we've ever built using FDM," said Joel Smith, the strategic account manager for aerospace and defense at RedEye.

The project required many preliminary meetings between Lockheed and the RedEye team as it was the first time building a design of this magnitude. "We completed an extensive design review to determine the best orientation and slice height to ensure we could accurately build and bond the sections together in post-processing and meet Lockheed's dimensional requirements," said Smith. RedEye landed on building the larger tank in 10 sections and the smaller tank in six sections in polycarbonate (PC) on the Fortus 900mcs.

RedEye and Lockheed had to adapt and make adjustments to the plan along the way to meet tolerances. "We decided to alter the orientation of the exterior clocking rings that go around the tanks and increase their wall thicknesses to support inserts," said Trevor Stolhanske, aerospace and defense project engineer at RedEye. 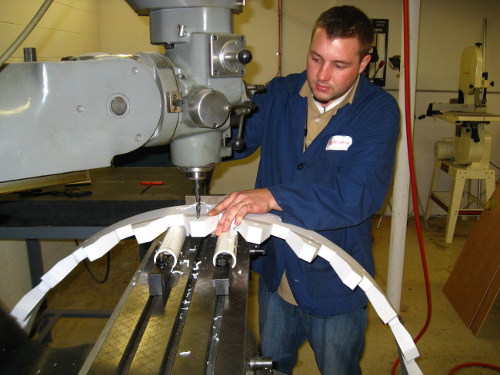 Adding inserts to the clocking rings.

Each section of the tanks took 150 hr to build, but even so, RedEye was able to build multiple sections at once, maximizing lead times and controlling costs. After all of the sections were complete, the support material was washed away, and the sections were sent to finishing services for bonding. 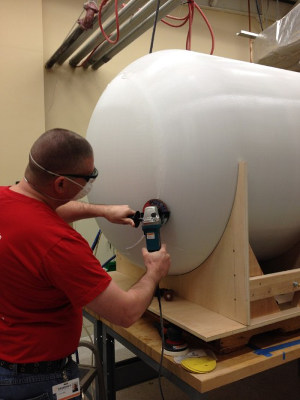 Bonding and sanding the largest tank.

Because of their round shape and weight, the only way RedEye could successfully bond the tanks was to build customized fixtures to hold the sections while fusing pieces together. After several hours of welding each section together, RedEye sanded the tank seams and surfaces. 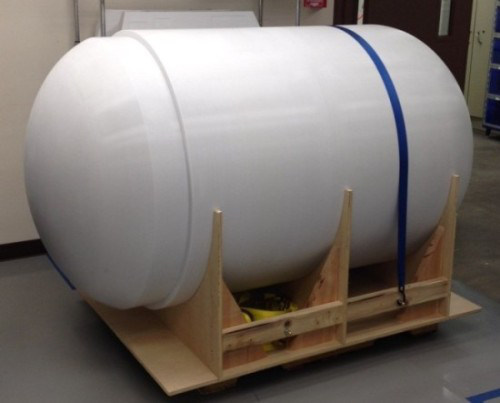 After finishing, the tanks and rings were sent to Hutchinson Manufacturing, Inc. to be machined to the design's critical dimensions. When RedEye received the tanks from Hutchinson, they added brass inserts to the rings and assembled the tanks per Lockheed's specifications. 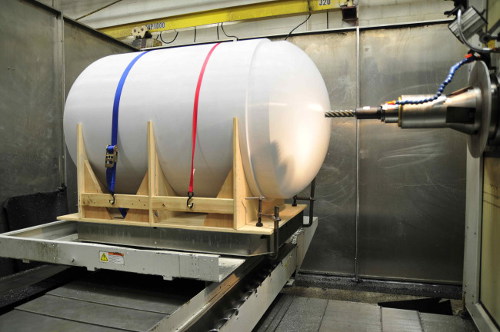 Final assembly
"These tanks were built in a fraction of the time it would have taken with traditional manufacturing methods. Even with the machining process and design changes made along the way, we were able to deliver these parts ahead of schedule," said Smith.

The tanks went through a number of quality assurance and accuracy measurements and were approved for the first concept assembly. Lockheed Martin's Space Systems Company performed form, fit, and function testing as well as process development in order to validate the proposed design changes. 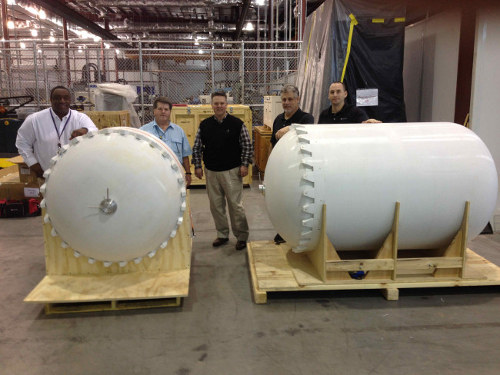 The project team shows off the finished tank prototypes.

Next, Lockheed will take what they learned from this first phase and use the information to optimize the design and assembly to print the second iteration of tanks.