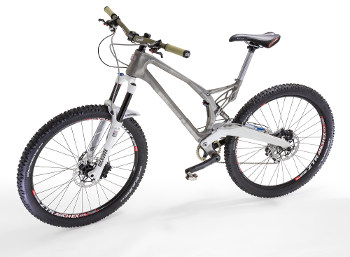 In the latest demonstration of what additive manufacturing can do in the finished-product (as opposed to prototyping) space, Empire Cycles of Lancashire, U.K., has created a super-cool, experimental mountain bike that features a 3D-printed titanium-alloy frame that weighs only 3 lb. The design is based on a cast aluminum bike called the MX-6 that the company offers already.

The project, undertaken in tandem with Renishaw, the U.K.'s only manufacturer of a metal-based additive manufacturing machine that prints metal parts, also incorporated topological optimization to squeeze out every last gram of unnecessary metal to make the frame as light as possible.

Renishaw originally agreed to optimize and manufacture the seat-post bracket only, but after this proved to be a resounding success, Empire Cycles decided the whole frame was an enviable goal. 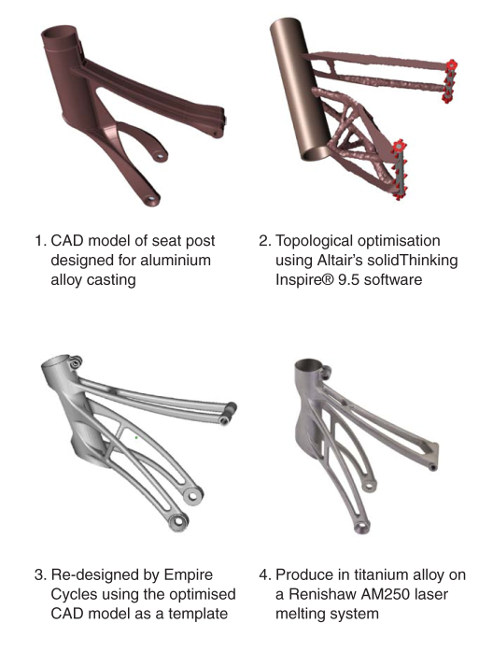 The key benefit for Empire Cycles is the performance advantages that this construction method provides. The design has all the advantages of a pressed steel "monocoque" construction used in motorcycles and cars, without the investment in tooling that would be prohibitive for a small manufacturer.

Renishaw's applications team helped Empire Cycles determine what would build well, and the frame was sectioned so that it would fully utilize the 300-mm build height of Renishaw's metal-printing machine, called the AM250. Renishaw's laser melting is an additive manufacturing technology that uses a high-powered laser to fuse fine metallic powders like titanium together to form functional 3-D parts. The time to print the frame was 3 days, 18 hours. The whole project took 20 weeks. 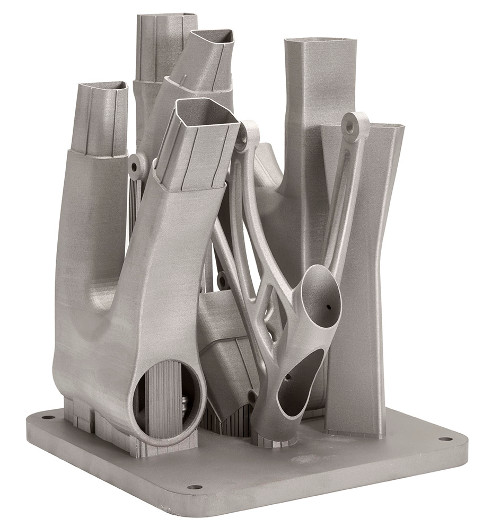 The entire bike frame was arranged in sections, with the seat-post bracket on one build plate and fabricated in one go.

Titanium alloys are more dense than aluminum alloys, with relative densities of around 4 g/cm3 and 3 g/cm3, respectively. Therefore, the only way to make a titanium-alloy version of a part lighter than its aluminum-alloy counterpart is to significantly alter the design to remove any material not contributing to the overall strength of the part.

The bike is still a work in progress, but because no tooling is required, continual design improvements can be made easily -- and because the component cost is based on volume and not complexity, some even lighter parts should be possible at minimal cost.

There are lighter carbon fiber bikes available, but Chris Williams, managing director at Empire Cycles, says, "The durability of carbon fiber can't compare to a metal bike. They are great for road bikes, but when you start chucking yourself down a mountain you risk damaging the frame. I over-engineer my bikes to ensure there are no warranty claims." 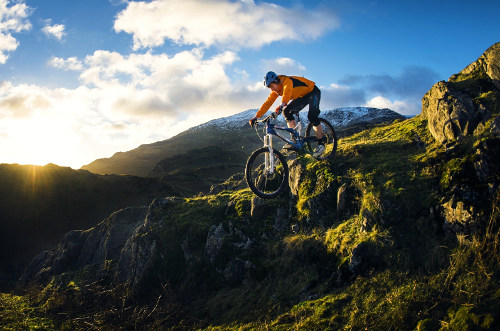 It's all about optimization
From the Greek word for place, "topo," topological optimization software is the term given to programs that are used to determine the "logical place" for material -- normally using iterative steps and finite element analysis. Material is removed from areas of low stress until a design optimized for load bearing is created. The resulting model is both light (due to the low volume) and strong.

By working together, Renishaw and Empire Cycles optimized the bicycle design for additive manufacture, eliminating many of the downward-facing surfaces that would otherwise have needed wasteful support structures.

The frame has been additively manufactured in titanium alloy in sections and bonded together. This offers a number of advantages, according to its designers:

Research into bonding methods for some of the titanium-alloy parts resulted in the materials wizards at Mouldlife (Suffolk, U.K.) providing the adhesive. Technical specialists at 3M are providing test facilities. Iterative improvements in bonding methods, such as specific surface finishes, are being investigated further. Testing of the completed bicycle frame continues, both in the laboratory using Bureau Veritas U.K., and on the mountainside using portable sensors in partnership with Swansea University in Wales. 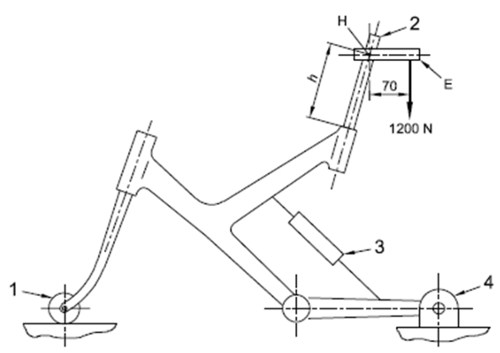