A device developed by Stanford bioengineers could one day provide real-time measurements of the head impacts sustained by football players. The research could also help characterize the forces sustained in more common head traumas, such as car accidents and falls. 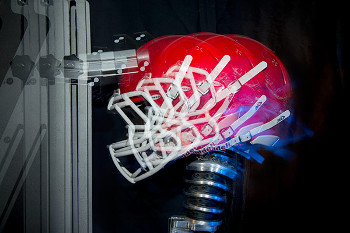 A multiple exposure shows the effect of an impact to the top of the helmet in a laboratory experiment. A head impact detection system using the instrumented mouthguard distinguishes between these head impacts and non-impact noise, such as dropping the mouthguard on the floor. [Image: L.A. Cicero]

The debilitating effects of repeated concussions on NFL players have been well documented. What scientists still don't clearly know is whether those injuries are the result of thousands of tiny impacts, or singular, crushing blows to the brain.

A group of bioengineers at Stanford is working to understand the head trauma that footballers experience during a game, and is making steps toward developing technology that reports dangerous hits in real time.

For the past few years, David Camarillo, an assistant professor of bioengineering, and his colleagues have been supplying Stanford football players with special mouthguards equipped with accelerometers that measure the impacts players sustain during a practice or game. Previous studies have suggested a correlation between the severity of brain injuries and the biomechanics associated with skull movement from an impact.

Camarillo's group uses a sensor-laden mouthguard because it can directly measure skull accelerations -- by attaching to the top row of teeth -- which is difficult to achieve with sensors attached to the skin or other tissues. So far, the researchers have recorded thousands of these impacts, and have found that players' heads frequently sustain accelerations of 10 g forces, and, in rarer instances, as much as 100 g forces. By comparison, space shuttle astronauts experience a maximum of 3 g forces on launch and reentry. 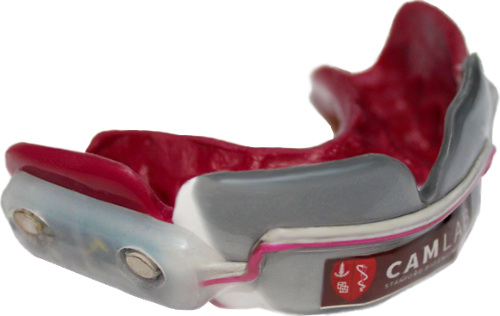 Refining the technology
Although these mouthguards have provided a wealth of data, they were not very discerning: A player tossing his mouthguard to the ground can register the same force as if he had been run over by a linebacker. This has required Camarillo's team to spend hours going through videos of games and practices to determine whether each player's time-stamped data matches a true impact or a spurious event, said Lyndia Wu, a bioengineering doctoral student in Camarillo's lab and the lead author on a new research paper, published recently in IEEE Transactions on Biomedical Engineering.

To overcome this dilemma, the researchers incorporated infrared proximity sensors into the mouthpiece, so that it can detect when the device is firmly seated against the player's teeth. (Teeth have a special property whereby they absorb and scatter infrared light, allowing the sensor to be triggered when in direct contact with the teeth.) Furthermore, machine-learning algorithms sift out additional "noisy" signals to only focus on real impacts. 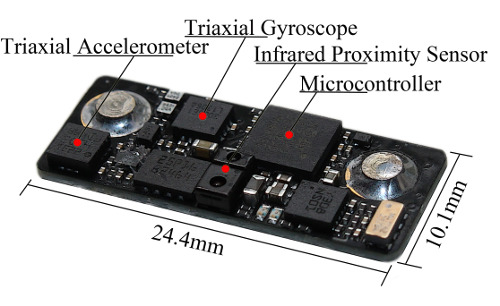 Wu said that both of these improvements make it faster to collect data, which will become critical for expanding research to other subject populations and collecting a larger data set to ultimately prove what specific aspects of head acceleration cause concussions.

"We do know that sustaining a second injury right after the first injury will exacerbate the trauma, so detecting that injury is critical," Wu said. "However, diagnosis often relies on players to self-report injuries, which doesn't work often for a variety of reasons. A player typically shakes it off, thinking he will be fine, without telling the coaches or trainers. Eventually, we hope to have a device that is able to screen for injury in real time."

Beyond the football field
The newly developed technology has been tested on an impact dummy in the lab and shows 99 percent accuracy in detecting head impacts. The next step involves refining the algorithms using field data.

A common issue with some of the commercially available systems is that they can provide too many warning alerts. Camarillo said it will be critical to make sure that the mouthguard can separate true impacts from other events, such as chewing, and to also conduct further studies to understand the true physiological significance of impacts.

Camarillo's lab is also interested in developing new helmets or other protective headgear; with the instrumented mouthguard, they can collect head biomechanics data to gain insight into injury mechanisms, which will in turn guide preventative technology design.

The work also has important implications off the football field. Although football players are at heightened risk, Camarillo said, the No. 1 cause of traumatic brain injuries is falling, which is most common among children and the elderly.

"Our football team has been extremely cooperative and interested in helping solve this problem," Camarillo said. "Football players willingly put themselves at risk at a well-defined point and time in space for us to carry out our research in this 'lab.' What we are learning from them will help lead to technologies that will one day make bike riding and driving in your car safer too."