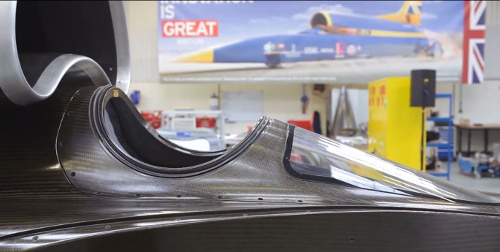 The cockpit of the BLOODHOUND SSC rocket car, the land-speed record contender being built in England, was unveiled June 12 in Bristol, UK. The state-of-the-art carbon fiber monocoque has been tailored to the needs of driver Andy Green and will be his supersonic office during record attempts to reach 1,000 mph in the South African desert in 2015 and 2016. 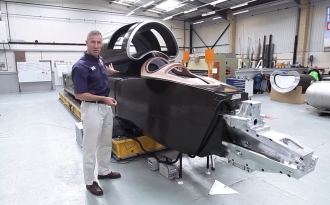 Sandwiched between the layers of carbon fiber are three different thicknesses of aluminum honeycomb core (8 mm, 12 mm, and 20 mm) that provide additional strength. At its thickest point, the monocoque comprises 13 individual layers but is just 25 mm in cross-section.

The cockpit structure weighs 200 kg and bolts directly to the metallic rear chassis carrying the jet, rocket, and racing car engine. The carbon front section will have to endure peak aerodynamic loads of up to three tons per square meter at 1,000 mph (1,609 kph) as well the considerable forces generated by the front wheels and suspension. It will also carry ballistic armor to protect the driver should a stone be thrown up by the front wheels at very high speeds. 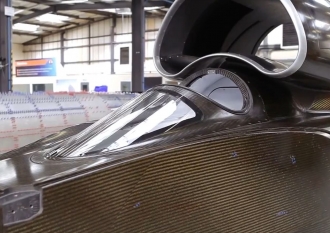 The roof of the cockpit has been designed to create a series of shockwaves that will channel the air into the Eurojet EJ200 jet engine. If supersonic air reaches the jet engine fan blades, the airflow will break down and the engine will "choke" (known as a "surge"). This can generate huge changes in pressure that could damage both the jet engine and car, so BLOODHOUND SSC uses shockwaves over the canopy to slow the airflow from over 1,000 mph to just 600 mph in a distance of around 1 meter. Deflecting winds travelling five times faster than a hurricane will, however, cause additional noise and vibration to be transmitted into the cockpit.

The sound levels expected in and around BLOODHOUND SSC are being carefully evaluated. The cockpit is positioned in front of three incredibly loud motors: the jet, a cluster of hybrid rockets, and the racing car engine that drives the rocket's oxidizer pump. Collectively, they will generate a noise level estimated at 140 decibels. Much of the noise will be directed backward, away from the driver, and above 750 mph the car will out-run its own sound waves. However, the project's engineers still anticipate that shockwave and jet intake noise levels may produce over 120 decibels inside the cockpit. Green will wear an in-ear communications system specially made by Ultimate Ear to protect his hearing and to ensure that he can communicate with Mission Control.

BLOODHOUND has a highly specialized windscreen custom made by PPA Group from acrylic. The plastic is heated, stretched, and then two layers are bonded together to create a 25-mm section, thicker than a fighter-jet's windscreen and sufficient to withstand an impact with a 1-kg bird at 900 mph. Due to the oblique angle that the windscreen is set, the driver will in fact be looking through 50 mm of curved plastic. The key challenge has therefore been to make the screen robust while maintaining absolute visual clarity. 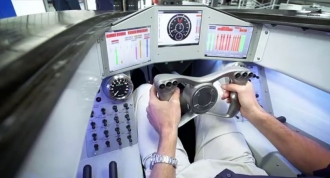 Green has drawn on his experience of flying fast jets and driving World Land Speed Record winners Thrust SSC and JCB Dieselmax to design the dashboard and cockpit layout. Good ergonomics are vital, given that BLOODHOUND SSC will cover a mile in 3.6 seconds, or 150 m in the (300-millisecond) blink of an eye.

The central screen shows the speed in miles per hour and Mach number (Mach 1 being the speed of sound), calculated by GPS, plus jet engine and rocket outputs. Dynamic speed indicators help Green to judge when to fire the rocket and deploy the braking systems. Wheel loads are also given prominence. BLOODHOUND does not use aerodynamic downforce, as a Formula 1 car does, while lift at the nose or rear axle must also be avoided at all costs. The need to carefully balance forces throughout its 1,000-mph speed range is one of the major reasons why shaping the car has taken an estimated 30 design-years.

The left-hand screen shows hydraulic pressures and temperatures in the braking and airbrake systems, while the one to Green's right provides information about the three engines, including temperatures, pressures, and fuel levels. Together, the EJ200 jet engine and Nammo hybrid rockets produce around 210 kN (21 tons) of thrust, equivalent to 135,000 thrust hp, or 180 F1 cars, and Green will monitor their status at key points during each run.

BLOODHOUND's dash also features two precision-engineered analog Rolex instruments: a chronograph with built-in stopwatch, and a speedometer graduated up to 1,100 mph. The speedometer is a vital backup to allow the car to be stopped safely should the digital dashboard fail, while the chronograph will help to time the start-up and cool-down of the jet, and help to monitor the performance of other systems. Tested to withstand the severe vibration at 1,000 mph and the desert heat, these bespoke Rolex instruments are unique to BLOODHOUND SSC.

Green enters his "mobile office" via a carbon fiber hatch, 500 mm in diameter, just below the jet air intake. At full power, the EJ200 fan sucks in 65 m3 of air per second, so the hatch will be fastened using latches able to withstand loads of 2.5 kN (quarter of a ton) to prevent it from getting ingested into the engine.

The instrument panels have been coated with a special non-reflective grey paint to provide the optimum background color against which to see the gauges and controls, while the cockpit walls are white to maximize the available light in the cockpit. The car also has interior lights, as BLOODHOUND SSC will often be prepared before dawn, when the desert will still be dark and temperatures around freezing. During the day, ambient temperatures will approach 104 F, though BLOODHOUND SSC will most likely not run in conditions above 77 F as the metallic sections of the car will get too hot for the team to handle and the jet engine is inefficient when burning hot, less dense air. Cockpit temperature is still expected to approach exceeding 95 F, so external air conditioning will be used to cool it prior to each run, though this is primarily for the comfort of the electronics, not the driver.

Green will keep BLOODHOUND SSC on course using a bespoke 3D-printed titanium steering wheel, shaped to his hands and finger reach. Buttons on the front control the EMCOM radio, airbrakes, and parachutes, while triggers on the rear of the handgrips prime and fire the rockets. BLOODHOUND engineers developed several design evolutions of the wheel, the last of which was finalized for manufacture by Cambridge Design Partnership. BLOODHOUND has a conventional steering rack with a 30:1 ratio (compared to a normal car of around 15:1), though its long wheelbase makes for a very large turning circle: 240 meters, compared with 10 meters for a typical family hatchback.

BLOODHOUND SSC has pedals like a regular car, though once again, they are custom designed for Green. The right-hand pedal throttles the EJ200 jet engine and will be used to start the car moving. The left pedal controls the wheel brakes and will be used to slow the car at speeds below 200 mph. The wheel brakes will only contribute about 1 percent of the total braking effort, reducing the stopping distance by around half a mile. Braking speed is critical, as using the wheel brakes above 200 mph will exceed their energy capacity and set fire to them. 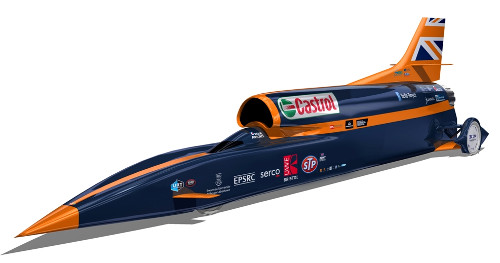 During a 1,000-mph run attempt, BLOODHOUND SSC will cover 12 miles in 2 minutes, exerting an acceleration force of almost 2G and peak deceleration force of 3G on Green. This long-duration G force is another experience unique to BLOODHOUND: An F1 driver may experience higher G forces, but they only do so for a few seconds at a time. Green will sit in a carbon fiber seat, molded to his body shape by Real Equip and manufactured by URT Group. This seat installation will provide unparalleled levels of support and safety for the driver, who will be angled back and strapped in using a Willans five-point harness. Green will also wear a Pro Ultra HANS device to protect his neck from sudden, violent movements or decelerations, and an Arai helmet.

The cockpit also carries a Camlock air supply, feeding clean breathing air to Green through the "Adom" mask used by Royal Air Force Typhoon pilots. This full-face race spec helmet, mated to a jet-fighter-style breathing system, is again unique to BLOODHOUND and combines the best driver protection features from both motorsport and aerospace. A Willans fire-suppression system has also been specified, which will douse the cockpit in foam should built-in infrared sensors detect naked flames.

Driver safety has been the prime design and engineering objective throughout BLOODHOUND's gestation, and the team has worked closely with motor racing's governing world body, the Federation Internationale de L'Automobile (FIA), to create the best safety cell in the history of motor sport.