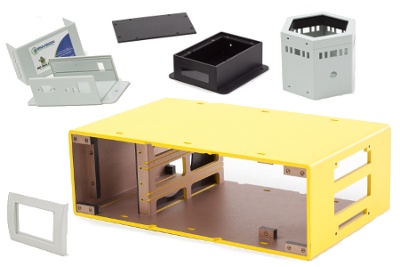 How often have you wondered what life would be like without having to worry about paying tooling charge after tooling charge for products in early development? Or having to work with shops in foreign countries to get tooling made and parts produced within reasonable lead times? Well, now you have a new choice: Envision Plastics & Design.

The technology
This "No Molds Required" (NMR) manufacturing technology involves simple concepts with specialized machines. Through a series of operations, parts used for enclosures, panels and shrouds, brackets and shields, and medical-based products (among many others) are fabricated from sheet stock materials such as ABS, Kydex, polycarbonate, and high-impact polystyrene of various grades, UL listings, and properties. It could almost be seen as a production process that harmonizes a combination of sheet metal fabrication (flat parts produced, then bends applied) and woodworking practices (tongue-and-groove applications).

The benefits
The most obvious benefit of this technology is the fact that there are no molds or tooling required to create these parts. This means very minimal up-front capital expenditure and drastically reduced lead times.

Design flexibility
Unlike when a mold is made, changes can be made to the design of the product throughout its life. These changes could be small revisions due to software or electrical changes, market demands, or simply creating a new look for an aged product.

This is especially true of a cart that held a specialized cleaning agent and mop that was to be used for an industrial/medical cleaning application. The customer came to Envision with an initial cart design concept. Envision took the concept, made some slight changes for manufacturability to use the NMR process, and produced five prototypes for market evaluation. The customer received feedback from the field that the cart was too large -- it took up too much room in storage closets. It was back to the drawing board. The customer asked Envision to design a "smaller" cart. The next revision had the same amount of storage space for the cleaning agent, but took up 66% less space in a closet. These next few prototypes were well received in the field. However, there were still a couple of changes that needed to be made. The third revision had been approved, and production units began to roll off the manufacturing floor. You can only imagine the tooling costs for not only the first cart, but the two extreme revisions that took place thereafter. 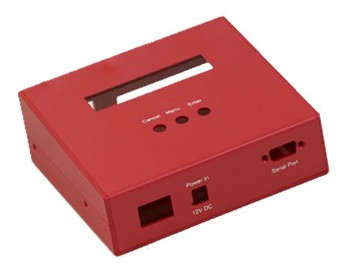 Short delivery times
Using NMR, versus other forms of plastic manufacturing, can have a reduced effect on lead times as well. Due to the fact that there is not a tool or mold to wait for, the parts can be produced weeks sooner than using traditional methods -- especially when getting new products to market is of utmost importance.

One customer's story can be summed up by this testimonial:

"Envision's design capability and unique technology allowed us to design high-quality custom enclosures without the expense and time required for hard tooling. Prototypes were available in weeks instead of months, allowing testing and evaluations to be performed much earlier in the program. Overall, we were able to reduce our development time by four to six months using Envision's team and technology."
Jim, Program Manager
Medical Device Firm

How the magic is made: Steps in the NMR technology process
Programming
This first step requires the knowledge of a unique software application developed in Germany in the early 1990s. An engineer will program the CNC mills and the CNC bending table, and at the same time create flat layouts of each component of the part assembly. If the customer desires changes to the complete part, or just a component of the whole assembly, a change can simply be made to the program in minutes.

CNC milling
Although the machines in this process are standard CNC routers, the purpose and parts produced end up to be quite different. The milling operation produces the parts in the flat state, during which time most holes, cutouts, grooves, and recess locations are created. If necessary, tongues are added during this process as well.

Faceting/deburring
Faceting is a hand operation in which table-top routers are used to deburr parts as well as apply radii and chamfers to the edges of the part or part component. Depending on part design, these routers may also be used to apply tongues.

Sawing
The Sawing process involves the application of a 45-degree miter to a location on the underside of the part that will serve as a bend line. A part could have one bend line or several, depending on the design of the part or enclosure. In addition, Envision has other saws that allow application of "clip-grooves" and larger tongues for larger part constructions.

CNC bending table
This piece of equipment could be considered a line-bending machine. However, what sets it apart is that it is CNC controlled. This allows for more precision tolerances to be held than a typical line bending machine. The dimensions of the bending locations on the part have already been pre-programmed into the machine and are waiting for the part to arrive. When the operator enters the program number assigned to the part, the machine will adjust itself to where the miter is located on the part to be bent -- which, as a result, will be directly over the warming area. The heating element below the table bed will heat the miter line at "x" temperature for the duration required for the material used. Most often, the heating period runs between 25 to 40 sec. This machine is 40 in. wide and is capable of bending several parts at once, reducing the cycle time per part. After the part has been bent, it is brought to the assembly/bonding area. 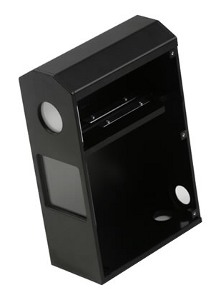 Solvent bonding
When the components of the complete part assembly are received in the bonding department, they will be joined together using a solvent welding solution. Mainly, it is applied where a bend line miter was applied (saw groove), where mounting bosses are needed, and for components of the enclosure or main part assembly that require end caps, covers, bases, or support rails. The latter welding operation utilizes the tongue-and-groove construction methods common with their technology. After the parts have cured, which takes anywhere from 15 to 30 min, the parts are packaged and shipped to the customer.

Where the technology is useful
This technology is useful for customers who desire quantity levels from prototypes to short-run production. Parts may make sense to be produced economically up to an estimated annual usage of 5,000 pieces. Envision knows that they fit a niche in the market, and that they are not a cure-all to injection molding. Doug Rosenthal, Envision's vice president, describes it this way: "There comes a time in every part's lifecycle, whether at the beginning or end, that a decision must be made on what manufacturing process to use. Sometimes, due to quantity, it makes sense to tool up right away. Other times, it makes more sense to use the NMR technology to set the first stage for the product's life. This is especially the case for products that have not been thrown into the marketplace yet, to have their viability or functionality tested. The NMR process can be of huge value when determining this important factor of a new product."

The technology presents itself to various markets. Some markets include: medical, telecommunications, computer peripherals, point of purchase, safety and security, traffic control, industrial controls, and various other electronic equipment applications. Of these, Envision says that the medical industry has seen the most benefit. Their analysis is based on their sales figures -- both dollars and quantity. As explained by Rosenthal, "Being located in the Twin Cities has shown to be a great benefit to a thriving medical manufacturing community based in this area. Our sales numbers have shown that the greatest proportion comes from medical-based products. The technology also shows the benefit with the quantity of parts ordered. Most orders from this sector are in the 25 to 50-a-month range. These quantities, especially as new products, would not support the cost of injection molding."

Despite the obvious cost benefits, Envision still faces the challenge of educating customers about this "new" technology. "To successfully sell this technology, your customer must be in the frame of mind to try something new that will most likely result in reducing overall costs," says sales and marketing manager Brian Du Fresne. "Many companies are stuck on the belief that if there is a new plastic part to be produced, the decision is 'Let's make a mold!' Fortunately, with the economic downturn that occurred in 2008, these companies have opened their eyes to new ways of cost reductions."