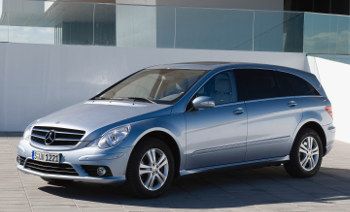 Think aluminum is the key to lightweighting automobiles and creating efficiencies in the future? Mercedes-Benz doesn't -- at least not for pistons. The company has switched to a high-strength steel piston design for its latest crop of diesel passenger-car engines.

The high-tech steel pistons are making their world premier this month in a standard production passenger car in the V6 diesel engine of the Mercedes-Benz E 350 BlueTEC wagon. The German automaker says that this updated car model features the same engine output (190 kW/ 258 hp) as its predecessor but achieves about 3 percent in diesel fuel efficiency thanks to the new piston materials and design.

Steel pistons are commonly found in commercial vehicle engines, where they are combined with heavy cast-iron crankcases, while aluminum pistons have over the years gradually become the norm for passenger-car diesel engines. The high-tech steel pistons that Mercedes-Benz has developed pair perfectly with the state-of-the-art and much lighter aluminum engine housings it uses. Coupled with the company's use of its own award-winning NANOSLIDE cylinder bore coating technology, the new cylinder design has efficiency appeal on several fronts. 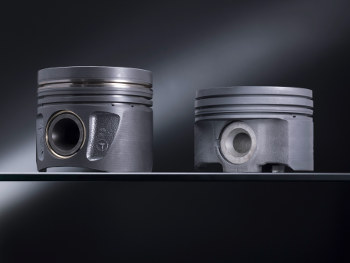 Steel and aluminum have significantly different characteristics: steel expands less than aluminum when hot, conducts heat less well, and is simply heavier. At first glance, this would seem to make the combination of aluminum housing and steel pistons tricky. But Mercedes-Benz engineers have used the apparent differences between the properties of the respective materials to their best advantage.

They exploited the fact that a steel piston only expands with heat to about a quarter of the extent of its aluminum equivalent to fit the steel piston more tightly within the aluminum housing, with the effect that it sits very snugly in the cylinder bore. However, as the temperature rises during operation of the engine, the aluminum housing expands more than the steel piston -- and the result is greater tolerance of the piston within the cylinder and thus less friction. As the piston/cylinder assembly alone causes between 40 and 50 percent of the mechanical friction, the potential for efficiency revealed here was significant.

Add to this the NANOSLIDE cylinder bore coating technology, which was pioneered by Daimler in 2006 in the AMG V8 gasoline engine. It uses twin-wire arc spraying (TWAS) technology to melt iron/carbon wires, which is sprayed onto the inside cylinder walls of the lightweight aluminum crankcase with the help of an inert gas flow. Very fine finishing of the resulting nano-crystalline iron coating creates an almost mirror-smooth surface with fine pores, which reduces friction between the piston assembly and the cylinder wall, while also being extremely resistant to wear.

Not your grandfather's (taller) piston
The steel pistons used up until this point were, however, little suited for engine housings made of aluminum. So Mercedes-Benz had to redesign the piston. The modern versions of the steel pistons that are standard in the V6 diesel onboard the E 350 BlueTEC, within an aluminum crankcase with NANOSLIDE cylinder bore coating technology, are high-tech components forged out of high-quality, high-strength steel. The challenge for the piston supplier is considerable, since the manufacturing process for the new, high-strength steels is complex.

But Mercedes-Benz engineers found the effort worthwhile, because the higher strength of the modern steel allows for a more compact piston design, which more or less compensates for the fact that the material is around three times as dense. So the steel pistons that sit in the six combustion chambers of the E 350's V6 diesel engine are as much as 13 mm lower than the aluminum equivalents used until now (aluminum pistons in the V6 diesel approx. 71.6 mm high, steel pistons only 58.6 mm). Thanks to this changed geometry and intelligent design, the weight of the unit (comprising piston, gudgeon pin, and piston rings) is on a par with the aluminum version. So Mercedes-Benz has been able to compensate almost completely for the weight disadvantage of using steel. The steel design also provides strength reserves for peak pressures that may become even higher in future. 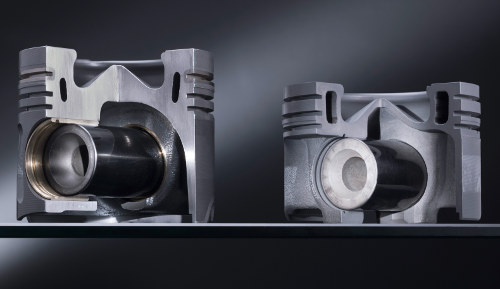 At the same time, the use of steel pistons has enabled the engineers to improve the level of efficiency, since the lower thermal conductivity of steel compared with aluminum means that higher temperatures are reached within the combustion chamber. The ignition quality thus increases, while the combustion duration is reduced. The result is lower fuel consumption and pollutant emissions. Mercedes-Benz took account of the lower thermal conductivity of steel with design modifications such as modified cooling ducts in the pistons.

Testing has shown that the innovative steel pistons optimize thermodynamic performance and, at the same time, reduce friction significantly. Furthermore, measurements showed that significant fuel-consumption benefits can be achieved in the lower and middle speed ranges, which are so important in everyday driving.

Looking toward the future
As far as the future is concerned, the engine designers at Mercedes-Benz see further possible advantages in the use of the high-tech steel pistons:

Joachim Schommers, head of basic engine development at Mercedes-Benz, says that the company is expecting to see the widespread use of high-strength steel pistons in Mercedes-Benz passenger-car four-cylinder diesel engines.