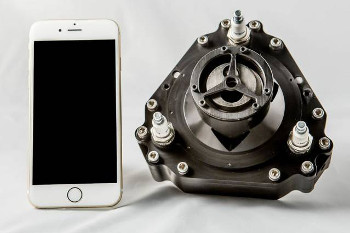 The X Mini engine prototype next to an iPhone 6 [Courtesy: LiquidPiston]

Noise, excessive vibration, and relative inefficiency are drawbacks of the piston-based internal combustion engines (ICEs) that power today's lawn and garden equipment, such as leaf blowers and lawn trimmers.

But now MIT startup LiquidPiston has developed a rotary ICE that it says is significantly smaller, lighter, and quieter, as well as 20 percent more fuel efficient than the ICEs used in many such small-engine devices.

"If you think of handheld tools -- for example, a chain saw or hedge trimmer -- after about a half hour you don't want to use it anymore because your hand feels like it's going to fall off," says MIT's Alexander Shkolnik PhD '10, president of LiquidPiston and co-inventor of the engine. "Our engine has no vibration at all, and it's a lot quieter. It should be a much nicer user experience all around."

LiquidPiston's 70-cubic-cm engine, the X Mini, produces about 3.5 hp at 10,000 RPM; at 4 lb, it's also about 30 percent smaller than the four-stroke, 50-cubic-cm piston ICEs it aims to replace. When fully complete and optimized, Shkolnik says, the X Mini could churn out about 5 hp at 15,000 revolutions per minute, and weigh 3 lb.

The engine runs the novel high-efficiency hybrid cycle (HEHC) -- developed by Shkolnik and his physicist father, Nikolay -- that achieves combustion at constant volume and overexpansion for greater energy extraction. With only two moving parts, a rotor and shaft, and no poppet valves -- commonly used in other four-stroke ICEs to control fuel intake -- the engine also has reduced noise, vibration, and harshness characteristics, Shkolnik says.

Initial applications will be handheld lawn and garden equipment, Shkolnik says. But the engine can be scaled and modified for other applications, including mopeds, drones, marine power equipment, robotics, range extenders, and auxiliary power units for boats, planes, and other vehicles. The company has also demonstrated proof-of-concept for high-efficiency diesel versions of the engine, including the 70-hp X1 and the 40-hp X2, for generator and other applications. The company hopes to eventually develop small diesel versions of the X Mini engine for military applications.

"If you look at a 3-kw military generator, it's a 270-lb gorilla that takes five people to move around," Shkolnik says. "You can imagine if we can make that into a 15-lb device, it's pretty revolutionary for them."

Shkolnik presented a paper on both the X2 and X Mini on Nov. 19 at the Society of Automotive Engineers' 2014 Small Engine Technology Conference and Exhibition in Italy.

An inverse Wankel
The X Mini is essentially an upgrade in design and efficiency of the compact Wankel rotary engine, invented in the 1950s and used today in sports cars, boats, and some aircraft.

In the Wankel, a rounded triangle rotor spins in an eccentric orbit within an oval chamber, with each rotation producing three power strokes -- where the engine generates force. In the X Mini, an oval rotor spins within a modified, rounded triangular housing. 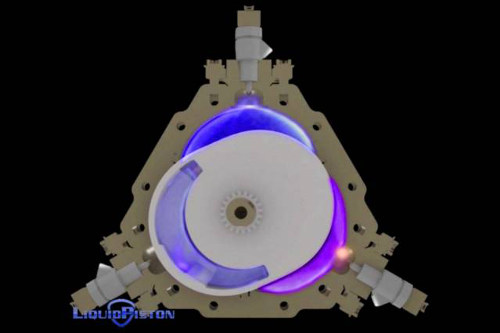 In the X Mini, an oval rotor orbits a rounded triangular housing, creating three combustion chambers. Asymmetrical location of intake and exhaust ports on the rotor allows for overexpansion (shown in purple), where the engine has more time to extract energy from the fuel. It also accommodates constant volume combustion, where compressed gas is held in the chamber for an extended period (shown in blue), mixing with air and igniting completely before expanding for greater efficiency. [Courtesy: LiquidPiston]

"We've inverted everything about the traditional rotary engine, and now we can execute this new thermodynamic cycle [HEHC] and solve all the problems that were plaguing the traditional Wankel engine" for small-engine applications, Shkolnik says.

Air and fuel intake and gas exhaust in the X Mini occur through two ports in the rotor, opened or closed as the rotor revolves, removing the need for valves. Asymmetrical location of these ports slightly delays the exhaust process during expansion. This allows for HEHC's overexpansion process -- from the Atkinson thermodynamic cycle, used in some hybrid cars -- where gas is expanded in the chamber until there's no pressure, allowing the engine more time to extract energy from fuel. This design also accommodates HEHC's "constant volume combustion" -- from the Otto thermodynamic cycle, used in spark-ignition piston engines -- where compressed gas is held in the chamber for an extended period, letting the air and fuel mix and ignite completely before expanding, resulting in increased expansion pressures and higher efficiency.

"It takes a long time to burn fuel in an engine," Shkolnik says. "In most engines, by the time you're burning fuel, you're expanding gases, and you're losing efficiency from the combustion process. We keep combusting while the rotor is at the top of the chamber and force combustion under those conditions. It's much more efficient that way."

Additionally, the X Mini has relocated the apex seals, leading to decreased oil consumption. In Wankels, apex seals join the edges of the triangular rotor, where they slide and move. Lubricating them requires supplying the air-fuel mixture with large amounts of oil that burn and leak, increasing emissions and oil consumption. In the X Mini, however, these seals are located in the triangular-shaped housing that stays put. "Now we can supply tiny amounts of oil through the stationary housing, exactly how much oil the seal needs, and you're not burning any oil and you're not losing any oil to the environment," Shkolnik says.

LiquidPiston's "roadmap"
An interest in robotics and artificial intelligence led Shkolnik to MIT as a PhD student in electrical engineering and computer science in 2003. That year, Nikolay Shkolnik filed his first HEHC patent, and his son learned about the MIT $50K Entrepreneurship Competition (now $100K) in a class that focused on tech entrepreneurship. They teamed up with students at the MIT Sloan School of Management to create a business plan and pitch an HEHC engine in the 2004 competition, where they took home the $10,000 runner-up prize to launch LiquidPiston.

The competition itself proved helpful to the father-and-son entrepreneurs -- who, at that point, had no startup experience. In building a detailed business plan and learning how to explain their technology to investors, "It really showed us a roadmap for what to do, and we were forced to think through a lot about issues we were going to face," Shkolnik says.

Over the next six years, Shkolnik helped his father develop the LiquidPiston engine out of the family garage, using skills he honed in MIT's Robot Locomotion Group, led by Russell Tedrake, an associate professor of electrical engineering and computer science. "It was a lot of optimization, and control, and simulations, and modeling," he says. "All those same techniques are applicable to designing an engine."

In 2006, after analyzing dozens of engine iterations, LiquidPiston earned a $70,000 military grant to produce an initial diesel-engine prototype. (Today, LiquidPiston has analyzed and patented about 60 different engine designs to embody HEHC.)

Due to overwhelming feedback from power equipment manufacturers -- calling for lighter, quieter, vibration-free engines -- LiquidPiston recently pivoted to the X Mini, which it developed and released in the last six months. The company has now received interest from potential customers, and is speaking to engine manufacturers interested in licensing the X Mini technology.

Early next year, the company plans to host a competition to solicit ideas from the public surrounding these new uses for the X Mini. "We want to get the creative juices flowing and open up to the wider community to see if there's something interesting," Shkolnik says.