3D printing is revolutionizing the production of lightweight structures, soft robots, and flexible electronics, but the technology struggles with complex, multimaterial integration.

To print a flexible device, including the electronics, a 3D printer must be able to seamlessly transition from a flexible material that moves with your joints for wearable applications, to a rigid material that accommodates the electronic components. It would also need to be able to embed electrical circuitry using multiple inks of varying conductivity and resistivity, precisely switching between them. And, it would be ideal to do all of this without the stopping the printing process.

The ability to integrate disparate materials and properties within printed objects is the next frontier in 3D printing.

Toward this objective, Harvard researchers have designed new multimaterial printheads that mix and print concentrated viscoelastic inks that allow for the simultaneous control of composition and geometry during printing. Using active mixing and fast-switching nozzles, these novel printheads change material composition on the fly and could pave the way for entirely 3D-printed wearable devices, soft robots, and electronics. 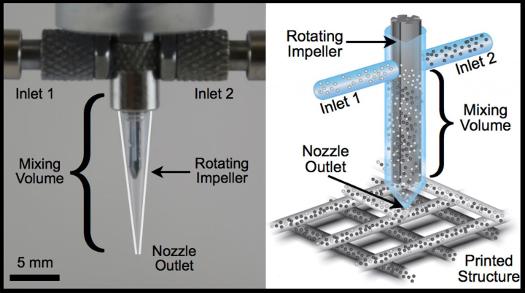 Impeller-based active mixer. Each fluid enters the mixing chamber through a separate inlet and is mixed in a narrow gap by an impeller rotating at a constant rate. [Credit: Thomas Ober, Harvard SEAS/Wyss Institute]

Mixing complex fluids is fundamental for printing a broad range of materials. But most mixing approaches are passive, wherein two streams of fluids converge into a single channel where they undergo diffusive mixing. This method works well with low-viscosity fluids, but is ineffective with high-viscosity fluids, like gels, especially in small volumes over short timescales.

To address this challenge, a new multimaterial printhead based on active mixing was designed by Lewis, along with Thomas Ober, postdoctoral research scholar at the Wyss Institute; and Daniele Foresti, the Society in Science Branco Weiss postdoctoral fellow. The active mixer efficiently mixes a wide range of complex fluids by using a rotating impeller inside a microscale nozzle.

The research team demonstrated several uses of their active mixing technology. They showed that silicone elastomers can be seamlessly printed into gradient architectures composed of soft and rigid regions. These structures may find potential application in flexible electronics, wearable devices, and soft robotics. They also printed reactive materials, such as two-part epoxies, which typically harden quickly when the two parts are combined. Finally, they showed that conductive and resistive inks could be mixed on demand to embed electrical circuitry inside 3D printed objects.

"The recent work by the Lewis Group is a significant advancement to the field of additive manufacturing," said Christopher Spadaccini, Director of the Center for Engineered Materials, Manufacturing and Optimization at Lawrence Livermore National Lab. "By allowing for the mixing of two highly viscous materials on the fly, the promise of mixed material systems with disparate mechanical and functional properties becomes much more realistic. Before, this was really only a concept. This work will be foundational for applications which required integrated electrical and structural materials."

Lewis' lab also recently designed another printhead that can rapidly switch between multiple inks within a single nozzle, eliminating the structural defects that often occur during the start-and-stop process of switching materials. 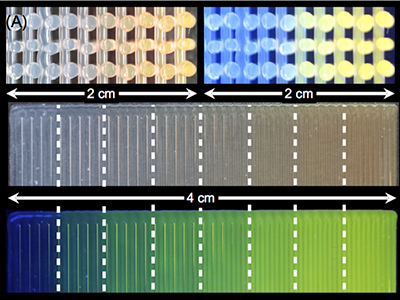 "This printhead design eliminates the need to align multiple nozzles as well as start and stop ink flow on demand," said James Hardin, first author of a recently published paper in Advanced Materials. This paper was co-authored by Ober, research fellow Alexander Valentine, and Lewis

"Together, these active mixing and switching printheads provide an important advance for multimaterial 3D printing," said Lewis. "They allow one to programmably control both materials composition and structure at the microscale, opening new avenues for creating materials by design."

This research was supported by the Department of Energy Frontier Research Center on Light-Material Interactions in Energy Conversion under Grant DE-SC0001293.