When astronauts travel to an asteroid and toward Mars in NASA's Orion spacecraft, they'll get a tremendous view of their deep space destinations and of Earth through the spacecraft's windows. NASA engineers are making sure those windows will be more structurally sound, lighter, and cheaper than on previous spacecraft. 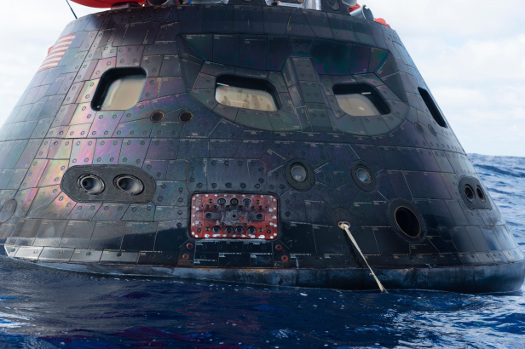 Orion's windows are pictured in this photograph taken Dec. 5, 2014, after the spacecraft splashed down in the Pacific Ocean following its successful first flight test. [All images credit: Lynda Estes]

On spacefaring vehicles like the space shuttle and the International Space Station that have enabled humans to push the boundaries of exploration, windows have typically been made of multiple panes of glass. Orion is being developed to include interior panes of an acrylic plastic material, a change that is improving the windows' integrity.

"Glass windowpanes have historically been part of the pressure shell on spacecraft that holds cabin pressure to keep the astronauts alive, and they also provided thermal protection from entry though Earth's atmosphere," says Lynda Estes, Orion window subsystem manager at NASA's Johnson Space Center in Houston, where the Orion Program is managed for the agency. "But the insidious thing about glass is that it's a poor structural material. If you put loads on it, it will lose strength over time, and if you get a ding on it, the strength is dramatically decreased. The spaceflight environment is one that, unfortunately, exploits these vulnerabilities."

Because glass is not an ideal material to use in a spacecraft, engineers have been on the lookout for something better. Many structurally sound materials exist, but few are also transparent.

During the early stages of Orion development, a polycarbonate material was considered for some of the interior window panes, but it didn't have the demanding optical properties needed for high-resolution imagery. The acrylic material that has since been chosen for the spacecraft was selected because it provides a clear view and also has an inherent strength that can be quantified. Aquariums around the country are using the same material, protecting the animals and plants behind them from the wear and tear of millions of visitors traveling through exhibits and sometimes pressing up against them to get a closer look, while also enduring the loads of water in the tanks.

Currently, Orion has four windows on the crew module/back shell cone, and additional windows on the docking hatch and the side hatch that the crew will use. Each window on the cone has three panes. The innermost pane on the cone windows is acrylic. Acrylic panes flew in space during Orion's first flight test in December 2014, and engineers are further testing the thermal integrity of acrylic panes this year to determine whether Orion can move to windows made of two acrylic panes and one glass pane. 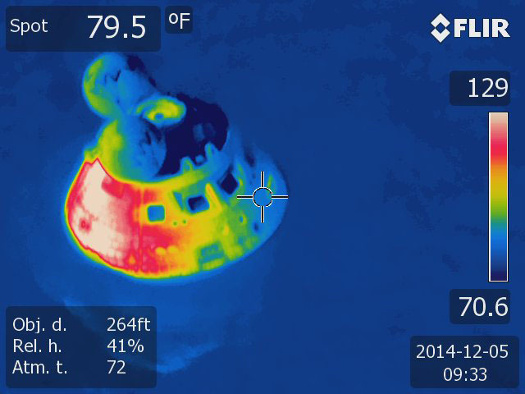 An infrared image shows the Orion crew module floating in the water about 600 miles southwest of San Diego at the end of its 2014 flight test.

In the coming months, Estes and her team also will put acrylic panes through an evaluation known as a "creep test." Acrylics can be susceptible to loading over long time spans, so the test will evaluate how a pane handles pressure loads during a 270-day period.

The work being done to incorporate acrylic panes into Orion is also helping to make the spacecraft lighter. Because the structural integrity is enhanced, and an inadvertent scratch or other damage to it won't jeopardize its strength, a multitude of panes isn't needed to provide redundancy. Reducing the number of panes in the Orion windows not only reduces the collective weight, but the acrylic material is also half as dense and doesn't weigh as much as glass.

"For Orion's flight test vehicle, the use of acrylic pressure panes reduced the weight of the window subsystem by more than 200 lb," said Estes. A change of the redundant thermal pane from glass to acrylic could yield 30 lb of savings or more. Reducing mass lowers the cost of getting to space, since decreasing weight means less propulsion is required to get a spacecraft out of Earth's atmosphere. 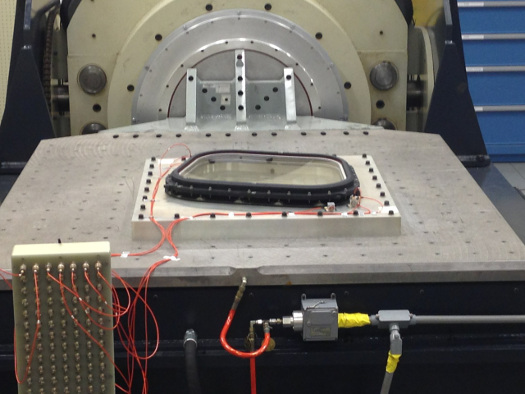 One of Orion's windows is evaluated in a test fixture.

The move to acrylic panes also has provided cost savings because the plastic material is considerably less expensive than glass. The glass panes used on Orion have also provided savings -- they were all manufactured from stock glass originally purchased for the Space Shuttle Program. At the retirement of the orbiters, Estes had these assets transferred to Lockheed Martin, NASA's prime contractor for Orion. Building windowpanes from these assets will reduce the cost of the Orion glass flight panes by more than $2 million.

NASA's work on the lightweight window materials for Orion has also been shared with the Commercial Crew Program facilitating the development of U.S. commercial crew space transportation systems to provide safe, reliable, and cost-effective access to and from the International Space Station and low-Earth orbit.

Not enough testing has been done yet to show that every pane can be made of the acrylic material, but the window modifications are providing a new outlook for Orion's future.

Video: What's the overall plan for the Orion module?