Ion thrusters are being designed for a wide variety of space missions -- from keeping communications satellites in the proper position (station-keeping) to propelling spacecraft throughout our solar system. These thrusters have high specific impulses (ratio of thrust to the rate of propellant consumption), so they require significantly less propellant for a given mission than would be needed with chemical propulsion. Ion propulsion is even considered to be mission enabling for some cases where sufficient chemical propellant cannot be carried on the spacecraft to accomplish the desired mission.

How does an ion thruster work?
An ion thruster ionizes propellant by adding or removing electrons to produce ions. Most thrusters ionize propellant by electron bombardment: a high-energy electron (negative charge) collides with a propellant atom (neutral charge), releasing electrons from the propellant atom and resulting in a positively charged ion. The gas produced consists of positive ions and negative electrons in proportions that result in no overall electric charge. This is called a plasma. Plasma has some of the properties of a gas, but it is affected by electric and magnetic fields. Common examples are lightning and the substance inside fluorescent light bulbs. 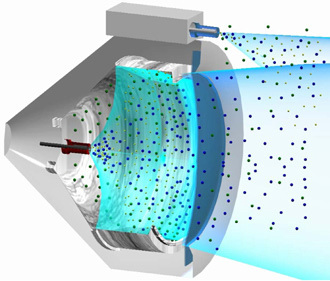 Plasma produced by an ion thruster.

The most common propellant used in ion propulsion is xenon, which is easily ionized and has a high atomic mass, thus generating a desirable level of thrust when ions are accelerated. It also is inert and has a high storage density; therefore, it is well suited for storing on spacecraft. In most ion thrusters, electrons are generated with the discharge hollow cathode by a process called thermionic emission.

The positively charged ions migrate toward grids that contain thousands of very precisely aligned holes (apertures) at the aft end of the ion thruster. The first grid is the positively charged electrode (screen grid). A very high positive voltage is applied to the screen grid, but it is configured to force the discharge plasma to reside at a high voltage. As ions pass between the grids, they are accelerated toward a negatively charged electrode (the accelerator grid) to very high speeds (up to 90,000 mph).

The positively charged ions are accelerated out of the thruster as an ion beam, which produces thrust. The neutralizer, another hollow cathode, expels an equal amount of electrons to make the total charge of the exhaust beam neutral. Without a neutralizer, the spacecraft would build up a negative charge and eventually ions would be drawn back to the spacecraft, reducing thrust and causing spacecraft erosion.

But the tradeoff for the high top speeds of ion thrusters is low thrust (or low acceleration) -- which is equivalent to the force you would feel by holding 10 U.S. quarters in your hand. These thrusters must be used in a vacuum to operate at the available power levels, and they cannot be used to put spacecraft in space because large amounts of thrust are needed to escape Earth's gravity and atmosphere. To compensate for low thrust, an ion thruster must be operated for a long time for the spacecraft to reach its top speed. Acceleration continues throughout the flight, however, so tiny, constant amounts of thrust over a long time add up to much shorter travel times and much less fuel used if the destination is far away.

The primary parts of an ion propulsion system are the ion thruster, power processing unit (PPU), propellant management system (PMS), and digital control and interface unit (DCIU). The PPU converts the electrical power from a power source -- usually solar cells or a nuclear heat source -- into the voltages needed for the hollow cathodes to operate, to bias the grids, and to provide the currents needed to produce the ion beam. The PMS may be divided into a high-pressure assembly (HPA) that reduces the xenon pressure from the higher storage pressures in the tank to a level that is then metered with accuracy for the ion thruster components by a low-pressure assembly (LPA). The DCIU controls and monitors system performance and performs communication functions with the spacecraft computer. 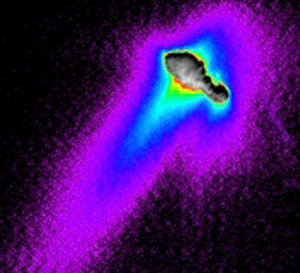 Past ion propulsion
The NASA Glenn Research Center has been a leader in ion propulsion technology development since the late 1950s, with its first test in space -- the Space Electric Rocket Test 1 -- flying on July 20, 1964. From 1998 to 2001, the NASA Solar Technology Application Readiness (NSTAR) ion propulsion system enabled the Deep Space 1 mission, the first spacecraft propelled primarily by ion propulsion, to travel more than 163 million miles and make flybys of the asteroid Braille and the comet Borelly.

Current ion propulsion
Ion thrusters (based on a NASA design) are now being used to keep over 100 geosynchronous Earth orbit communication satellites in their desired locations, and three NSTAR ion thrusters that utilize Glenn-developed technology are enabling the Dawn spacecraft (launched in 2007) to travel deep into our solar system. Dawn is the first spacecraft to orbit two objects in the asteroid belt between Mars and Jupiter: the protoplanets Vesta and Ceres.

Left: Vesta as viewed by Dawn spacecraft. Right: Mysterious bright spots spotted by Dawn in 2015 as it orbited above Ceres.

Future ion propulsion
As the commercial applications for electric propulsion grow because of its ability to extend the operational life of satellites and to reduce launch and operation costs, NASA is involved in work on two different ion thrusters: the NASA Evolutionary Xenon Thruster (NEXT) and the Annular Engine.

NEXT, a high-power ion propulsion system designed to reduce mission cost and trip time, operates at three times the power level of NSTAR and was tested continuously for 51,000 hours (equivalent to almost six years of operation) in ground tests without failure to demonstrate that the thruster could operate for the required duration of a range of missions.

NASA Glenn recently awarded a contract to Aerojet Rocketdyne to fabricate two NEXT flight systems (thrusters and power processors) for use on a future NASA science mission. In addition to flying the NEXT system on NASA science missions, NASA plans to take the NEXT technology to higher power and thrust-to-power so that it can be used for a broad range of commercial, NASA, and defense applications.

NASA Glenn's patented Annular Engine has the potential to exceed the performance capabilities of the NEXT ion propulsion system and other electric propulsion thruster designs. It uses a new thruster design that yields a total (annular) beam area that is two times greater than that of NEXT. Thrusters based on the Annular Engine could achieve very high power and thrust levels, allowing ion thrusters to be used in ways that they have never been used before. The objectives are to reduce system cost, reduce system complexity, and enhance performance (higher thrust-to-power capability).

NASA Glenn's continuing advancements will adapt ion thrusters for a broad range of missions to efficiently and reliably provide propulsion for NASA, commercial, and defense applications.