Can you make valuable electronics out of coal?

Instead of burning up this complex hydrocarbon, let's make devices from it.

Jeffrey Grossman thinks we've been looking at coal all wrong. Instead of just setting it afire, thus ignoring the molecular complexity of this highly varied material, he says, we should be harnessing the real value of that diversity and complex chemistry. Coal could become the basis for solar panels, batteries, or electronic devices, he and his research team say.

As a first demonstration of what they see as a broad range of potential high-tech uses for this traditionally low-tech material, Grossman, doctoral student Brent Keller, and research scientist Nicola Ferralis have succeeded in making a simple electrical heating device that could be used for defrosting car windows or airplane wings, or as part of a biomedical implant. In developing this initial application, they have also, for the first time, characterized in detail the chemical, electrical, and optical properties of thin films of four different kinds of coal: anthracite, lignite, and two bituminous types. Their findings have were reported March 31, 2016, in the journal NanoLetters. 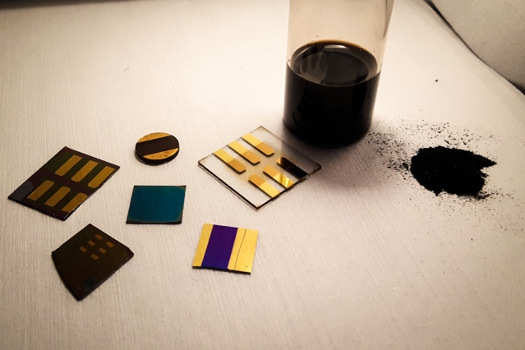 "When you look at coal as a material, and not just as something to burn, the chemistry is extremely rich," says Jeffrey Grossman. In this photo, a sample of pulverized coal (right) is shown with several test devices made from coal by the MIT researchers.

"When you look at coal as a material, and not just as something to burn, the chemistry is extremely rich," says Grossman, the Morton and Claire Goulder and Family Professor in Environmental Systems in the Department of Materials Science and Engineering (DMSE). The question he wanted to ask is, "Could we leverage the wealth of chemistry in things like coal to make devices that have useful functionality?" The answer, he says, is a resounding yes.

It turns out, for example, that naturally occurring coal varieties, without the purifying or refining that is needed to make electronic devices out of silicon, have a range of electrical conductivities that spans seven orders of magnitude (10 million times). That means that a given variety of coal could inherently provide the electrical properties needed for a particular component.

Designing a process
Part of the challenge was figuring out how to process the material, Grossman says. For that, Keller developed a series of steps to crush the material to a powder, put it in solution, then deposit it in thin uniform films on a substrate -- a necessary step in fabricating many electronic devices, from transistors to photovoltaics.

Even though coal has been one of the most widely used substances by human beings for centuries, its bulk electronic and optical properties had never really been studied for the purpose of advanced devices.

"The material has never been approached this way before," says Keller, who carried out much of the work as part of his doctoral thesis in DMSE, "to find out what the properties are, what unique features there might be." To do so, he developed a method for making thin films, which could then be tested in detail and used for device fabrication.

A simple heating device made by the researchers from unrefined pulverized coal, shown at left under visible light and at right in infrared light, showing the heat produced by the device. [Photo courtesy of the researchers]

Even this new, detailed characterization they carried out is just the tip of a large iceberg, the team says. The four varieties selected are just a few of the hundreds that exist, all with likely significant differences. And preparing and testing the samples was, from the outset, an unusual process for materials scientists. "We usually want to make materials from scratch, carefully combining pure materials in precise ratios," says Ferralis, also in DMSE. In this case, though, the process involves "selecting from among this huge library of materials," all with their own different variations.

Using nature's complexity
While coal and other fossil fuels have long been used as feedstocks for the chemical industry, making everything from plastics to dyes and solvents, traditionally the material has been treated like other kinds of raw ore: something to be refined into its basic constituents, atoms, or simple molecules, which are then recombined to make the desired material. Using the chemistries that nature has provided, just as they are, is an unusual new approach. And the researchers found that by simply adjusting the temperature at which the coal is processed, they could tune many of the material's optical and electrical properties to exactly the desired values.

The simple heating device the team made as a proof of principle provides an end-to-end demonstration of how to use the material, from grinding the coal, to depositing it as a thin film, and making it into a functional electronic device. Now, they say, the doors are opened for a wide variety of potential applications through further research. 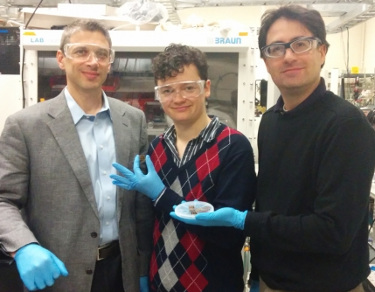 The big potential advantage of the new material, Grossman says, is its low cost stemming from the inherently cheap base material, combined with simple solution processing that enables low fabrication costs. Much of the expense associated with chip-grade silicon or graphene, for example, is in the purification of the materials. Silica, the raw material for silicon chips, is cheap and abundant, but the highly refined form needed for electronics (typically 99.999 percent pure or more) is not. Using powdered coal could provide a significant advantage for many kinds of applications, thanks to the tunability of its properties, its high conductivity, and its robustness and thermal stability.

Shenqiang Ren, an associate professor of mechanical engineering at Temple University who was not involved in this research, calls this work a "very extensive and informative study to facilitate the understanding of unrefined coal's potential for practical significance." He adds, "This is a significant step (probably the first) to utilize nanocarbon materials, directly from unrefined coal, with controllable electronic properties and excellent stability and scalability."

The work was made possible, Grossman says, thanks to a grant from the Bose Fellows Program at MIT, which encourages the kind of high-risk research embodied in this project. The work was also supported by ExxonMobil through the MIT Energy Initiative and the ExxonMobil Energy Fellow Program.