Is your company in a bad mood? 11 signs and what to do about it

Is your company in a bad mood? The signs aren't always overt. People aren't biting each other's heads off or glaring sullenly across the conference table. Instead, it feels like everyone is just ... coasting. Rather than digging for solutions, they make a cursory effort and then lay the problem at your feet. They're not cage-rattlers and idea-sharers; they're "yes men" and passive compliers. And if you could be the proverbial fly on the wall, you suspect you'd hear far more complaining and blaming than the faked enthusiasm you usually hear. 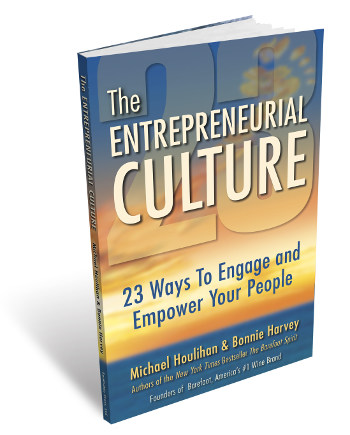 That's bad mood in workplace parlance. And Michael Houlihan says that apathetic clock-punchers are the creations of a culture that's set up to squelch their inner entrepreneur.

"Jeff Hayzlett, who wrote the foreword of our new book, says bad mood comes from employees believing their best days are behind them, not ahead of them," says Michael Houlihan, coauthor along with Bonnie Harvey of "The Entrepreneurial Culture: 23 Ways to Engage and Empower Your People" and the New York Times bestseller "The Barefoot Spirit: How Hardship, Hustle, and Heart Built America's #1 Wine Brand." I think that's a brilliant way to put it. And of course, it's culture that creates that belief -- and it's leaders who create the culture."

Sometimes, a culture's mood sours over time, before you even know it's happening. A stifling rule here, an ignored idea there, and before long the company has zapped the entrepreneurial spirit that enabled its employees to create great things in the first place. The only cure is to have employees realize they really do have a stake in their future and the ability to make it a great one.

That's what their book helps leaders do. The book's tactics echo the methods by which the authors ran Barefoot Wine -- making sure its leadership practices, compensation structure, and processes were set up in a way that kept employees fully engaged, empowered, and yes, entrepreneurial.

Of course, before you can shift a bad mood, you need to know you have one. Here are 11 red flags to look for:

"When a technical error is made, realize that making an example of the culprit isn't necessarily the best way to go," Houlihan shares. "Instead of blaming, aim the focus on figuring out what went wrong, and how you can prevent that error from occurring again.

"At Barefoot, our approach to mistakes was to say, 'Congratulations! You found a new way to screw up, and that's a good thing. We didn't know that this could happen, but now that it has, we can keep it from happening again,'" he adds. "This attitude gave our employees the freedom to take risks, encouraged entrepreneurial thinking, and led to an all-around better mood."

"At Barefoot, we found that the key to turning worker bees into solutions-oriented entrepreneurs was simplifying our structure into just two divisions -- Sales and Sales Support -- and linking everyone's pay to the performance of Sales," explains Harvey. "The reasoning behind this decision is simple: Everyone in your company gets paid from sales. Without sales, there is simply no money to pay salaries, bonuses, or benefits. When we began giving our Sales Support people bonuses based on quarterly sales amounts, Barefoot became more efficient, more responsive, and even closer-knit.

"For instance, if a salesperson in Michigan needed statistics to convince a store owner to place an order, the office staff hustled out a report," she continues. "If our crew needed signs and posters for an event in Seattle, the marketing folks jumped right on it. Income was at stake for everyone -- and everyone responded accordingly!"

"Instead of a 'need-to-know' policy, at Barefoot we advocated a 'know-the-need' approach," says Harvey. "Your people are full of intelligence, ideas, and passion -- you just have to unlock those things! So do whatever you can to engage your entire team and keep the information free-flowing. Of course, you may be tempted to keep bad news and problems to yourself. Don't. Be honest about the challenges your company is facing and ask the entire staff for solutions. You'll probably get them!"

"You can begin to turn this particular manifestation of a bad mood around by giving your employees more freedom when they deal with customers," Houlihan instructs. "Instead of tying their hands with a script that's unsatisfying and phony, show your people that you trust them to use their best thinking by giving them room to do what they think is necessary to satisfy the customer. This might involve getting rid of phone-call time limits and empowering them to offer free products and/or services, for example. Not only will your employees begin to really hone their entrepreneurial thinking skills, they'll end each day with the satisfaction that comes from knowing that they transformed a disgruntled customer into a happy, loyal one."

"At first [the company] might have to require or 'strongly encourage' people to meet with certain clients, vendors, etc.," Harvey says. "But over time, employees will begin to develop strong, mutually fulfilling business relationships, and they'll probably also see how much more effective communicating in real time can be. (No misread email tones or long waits for responses, and increased trust!) In most cases, job satisfaction will go up, and people will start putting in facetime voluntarily."

"Even if they'd never say so, workers want to know that they're doing well and that their efforts are valued," Houlihan points out. "Don't take it for granted when employees put in extra hours, land a coveted client, or turn out an incredibly well-thought-out proposal, for example. Make sure they know that you have noticed their efforts."

"Do you find it difficult to delegate important projects?" asks Houlihan. "Do you insist on running every new idea through legal before letting an employee pursue it? Are you a micromanager?

"If you engage in any of these behaviors, it's important to stop, step back, and show people that you trust them to make important decisions and do important work," he continues. "When you do, you'll give your team the freedom they need to help move the company forward -- and you'll free up a lot of time and energy for yourself too."

"Of course, smart leaders should always look out for their company's best interests," says Harvey. "But be honest: Are you being overly cautious? Are you afraid of the change the new idea could bring around? Not only should you give each idea employees bring to you fair consideration, it's smart to proactively ask people for their thoughts on how the company can grow and improve. At Barefoot, some of our most valuable innovations came about because our people knew that their thoughts were valued and would be taken seriously."

"Don't worry, we're not saying that you have to put a basketball court and bowling alley in your facility, or else," clarifies Houlihan. "We're simply pointing out that when you strive to make it fulfilling and fun to work for you, you'll create productive, loyal employees. At Barefoot, we covered 'fulfilling' by putting serious thought into matching employees with positions that utilized their strengths and skills, and asking for their input regarding how they thought they could be most valuable to the company.

"Employees who aren't invested in your organization's future usually won't go out of their way to give pointers to the new hire or proofread a colleague's report, for example," says Harvey. "If that's the case in your company, we suggest that you start cultivating more team spirit by starting with new employees. Match them up with more experienced mentors who can advise, teach, challenge, and encourage them. The rookie will appreciate the personalized guidance and will be encouraged to form meaningful bonds with his or her colleagues right out of the gate. Plus, all but the most cynical veterans will soften when they see how fulfilling it can be to pass on their knowledge and expertise."

"Fortunately, it often takes only one leader to break this pattern by setting a better example," Houlihan says. "Treat salespeople with respect instead of dismissing them. Never have a 'that's just another salesperson' attitude. Take their calls. Hear them out. When you treat third parties as valuable allies who can significantly influence your bottom line -- or help you survive -- they often will. And that's good for the morale of everyone involved."

"Mood matters," concludes Harvey. "Cultivating a good mood in your organization is the key to unleashing a transformative entrepreneurial spirit in people."

"If you're not sure where to begin, go for the low-hanging fruit," Houlihan advises. "Reread the list of bad-mood indicators above, identify which one or two are the biggest inhibitors to progress in your company, and start there."

Editor's Note: This book was first published at the end of 2014, but it still contains readily usable advice. It certainly could get some conversations going in the workplace.