Thermionics: Modernizing a technology from the vacuum tube era to generate cheap power

When scientists Daniel Riley and Jared Schwede left Stanford University last year to join Cyclotron Road, a Lawrence Berkeley National Laboratory (Berkeley Lab) program for entrepreneurial researchers, their vision was to take thermionics, an all-but-forgotten technology, and develop it into a clean, compact, and efficient source of power.

Little did they know that soon after arriving, a collaboration with a Berkeley Lab scientist would allow their research to take a big shortcut, providing them with unprecedented insight into the inner workings of thermionic devices.

"It turns out, by almost fortuitous coincidence, that a microscope we have is supremely sensitive to a material property these guys were after," said Andreas Schmid, a scientist with Berkeley Lab's Materials Sciences Division. "Once we had that conversation, it dawned on us, this is a match made in heaven."

Riley and Schwede's thermionics collaboration was recently awarded $3.8 million from the Department of Energy's Advance Research Projects Agency -- Energy (ARPA-E), which they will share with Schmid at Berkeley Lab, as well as with collaborators from Stanford, UC Berkeley, and the University of Pennsylvania. Their goal is to develop an entirely new type of generator that can produce clean power from any fuel source at high efficiency, all in a quiet and scalable package.

Thermionics is a method for converting heat to electricity that was developed in the 1960s and 1970s, primarily for use in the space-nuclear program. In a thermionic device, electrons evaporate from a hot cathode into a vacuum and are collected by a cooler anode, generating current.

"Thermionics got a lot of interest as part of the space program because of its high efficiency and power density," Schwede said. "But the program was shut down in 1973, and thermionics never really found its feet. It's either been forgotten or has had a reputation of an old technology that's been tried before."

Now the idea is to revitalize the technology by applying tools of modern-day science, including twenty-first-century materials and microfabrication methods. This is where Schmid and his spin-polarized low-energy electron microscope (SPLEEM) come in. SPLEEM is housed at the National Center for Electron Microscopy, part of Berkeley Lab's Molecular Foundry, a Department of Energy Office of Science User Facility. 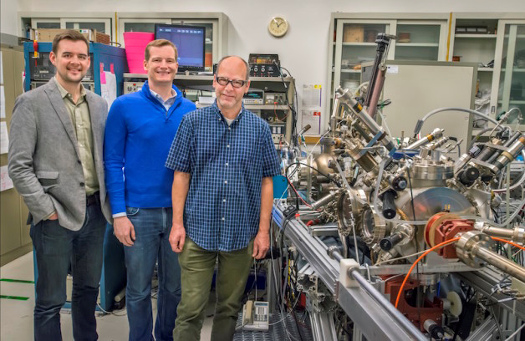 "This microscope was made to visualize surface magnetism, which is a subtle property, and many other microscopes don't see it that well," said Schmid, a physicist who studies magnetism. "Jared and Dan want to detect a completely different subtle surface property, called the work function. I sort of knew this microscope was sensitive to it, but what I didn't know -- and was a very big surprise to me -- was that you can use this work function property to make a novel electrical generator."

The work function is basically a measure of how tightly a material clings to its electrons. "In thermionics you take two materials that have very different work functions, put plates next to each other, make one plate hotter than the other, and magically, electricity comes out," Schmid said. "When they explained this to me and showed me the efficiency can be as high as 30 percent or more, which is comparable to the best thermal-to-electricity conversion methods that exist, this was a huge surprise for me."

Riley and Schwede, who were introduced to Schmid soon after coming to Berkeley Lab as part of Cyclotron Road, were equally excited to collaborate with Schmid.

"His microscope was built for exactly what we wanted to do," Schwede said. "Historically studying thermionics was like a black box. You would have current voltage characteristics, and based on the shape of those curves, you would have to reason about complicated interrelated parameters. This basically allows us to crack open that black box and study precisely what's going on and compare that to our device results."

The ARPA-E award will allow the team to develop compelling prototypes. Riley and Schwede have founded a startup company, Spark Thermionics, to pursue their portion of the project and drive its commercialization. Ultimately, they envision a small device that can fit on a desk and easily scale depending on the application. "Just like solar cells, where you can string many of them together to make a module," Schwede said, "we believe that our thermionic devices can scale in modules from watts to megawatts."

In addition to being useful in developing countries, their thermionic power generator could be used in a combined heat and power (CHP) system for a single home. "When you heat water in your home, you're actually taking a 2,000-plus degree flame -- a natural gas flame can be that hot -- and all you're doing is heating water to 80 degrees Celsius. From the thermodynamic perspective, all of that is going to waste," Riley said. "Our thermionic device can generate electricity in the home and use the waste heat to warm it, increasing the overall efficiency and dramatically reducing carbon emissions at the same time."

Added Schmid, "These guys have something that will be a revolution in how we make electricity."