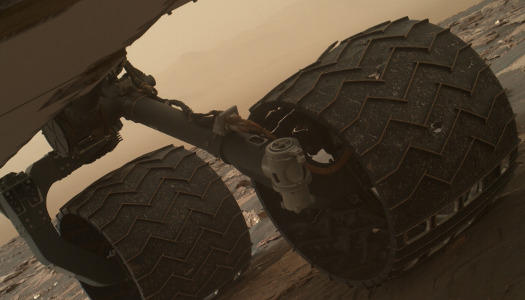 Two of the raised treads, called grousers, on the left middle wheel of NASA's Curiosity Mars rover broke during the first quarter of 2017, including the one seen partially detached at the top of the wheel in this image from the Mars Hand Lens Imager (MAHLI) camera on the rover's arm. [Credits: NASA/JPL-Caltech/MSSS]

A routine check of the aluminum wheels on NASA's Curiosity Mars rover has found two small breaks on the rover's left middle wheel -- the latest sign of wear and tear as the rover continues its journey, now approaching the 10-mile (16-km) mark.

The mission's first and second breaks in raised treads, called grousers, appeared in a March 19 image check of the wheels, documenting that these breaks occurred after the last check on Jan. 27.

"All six wheels have more than enough working lifespan remaining to get the vehicle to all destinations planned for the mission," said Curiosity Project Manager Jim Erickson at NASA's Jet Propulsion Laboratory, Pasadena, CA. "While not unexpected, this damage is the first sign that the left middle wheel is nearing a wheel-wear milestone,"

The monitoring of wheel damage on Curiosity, plus a program of wheel-longevity testing on Earth, was initiated after dents and holes in the wheels were seen to be accumulating faster than anticipated in 2013. Testing showed that at the point when three grousers on a wheel have broken, that wheel has reached about 60 percent of its useful life. Curiosity already has driven well over that fraction of the total distance needed for reaching the key regions of scientific interest on Mars' Mount Sharp.

Curiosity Project Scientist Ashwin Vasavada, also at JPL, said, "This is an expected part of the lifecycle of the wheels, and at this point does not change our current science plans or diminish our chances of studying key transitions in mineralogy higher on Mount Sharp." 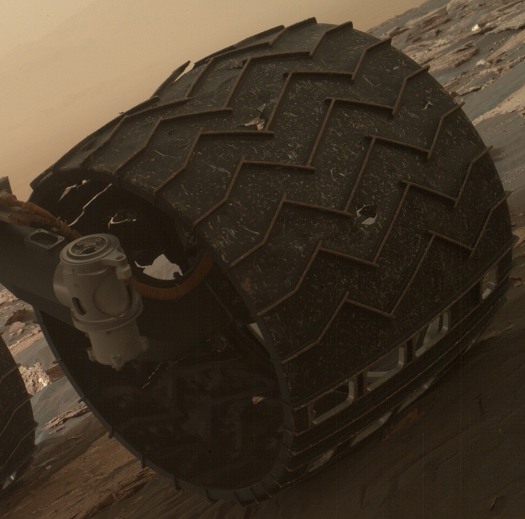 The rover is climbing to sequentially higher and younger layers of lower Mount Sharp to investigate how the region's ancient climate changed billions of years ago. Clues about environmental conditions are recorded in the rock layers. During its first year on Mars, the mission succeeded at its main goal by finding that the region once offered environmental conditions favorable for microbial life, if Mars has ever hosted life. The conditions in long-lived ancient freshwater Martian lake environments included all of the key chemical elements needed for life as we know it, plus a chemical source of energy that is used by many microbes on Earth.

Through March 20, Curiosity has driven 9.9 miles (16.0 km) since the mission's August 2012 landing on Mars. Studying the transition to the sulfate unit, the farthest-uphill destination, will require about 3.7 miles (6 km) or less of additional driving. For the past four years, rover drive planners have used enhanced methods of mapping potentially hazardous terrains to reduce the pace of damage from sharp, embedded rocks along the rover's route.

Each of Curiosity's six wheels is about 20 in. (50 cm) in diameter and 16 in. (40 cm) wide, milled out of solid aluminum. The wheels contact ground with a skin that's about half as thick as a U.S. dime, except at thicker treads. The grousers are 19 zigzag-shaped treads that extend about a quarter inch (three-fourths of a centimeter) outward from the skin of each wheel. The grousers bear much of the rover's weight and provide most of the traction and ability to traverse over uneven terrain.

For more information about the mission, go to http://mars.jpl.nasa.gov/msl/.

Wondering if aluminum was a sound choice for the Mars Curiosity rover wheel material or if it degrades differently on Mars than on Earth? I did, so I gave NASA a call. 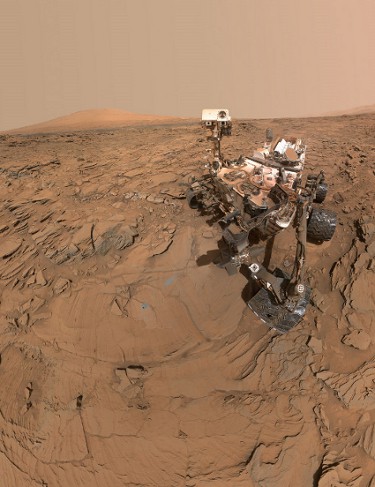 Matt Heverly, mobility systems engineer for the Mars Science Laboratory rover at NASA's Jet Propulsion Laboratory (JPL), was kind enough to answer my questions. Heverly works with the mobility hardware and software development teams to ensure the Curiosity rover operates properly on the surface of the fourth planet from the sun.

When it comes to the decision to use aluminum for the wheels, Heverly says that this material was a sound choice and that it does not, on its own, experience any marked degradation on Mars as compared to Earth. Aluminum fit the bill as far as exhibiting a very high strength-to-weight ratio, and it is one of the most common material choices for space structures of all kinds.

Where the Curiosity wheels ran into trouble was in the design and, specifically, the initial design testing parameters used to simulate wear and tear when it comes to rock contact and rock types.

"Fundamentally, the problem with the holes in the wheels was that we did not test in a relevant way," says Heverly. 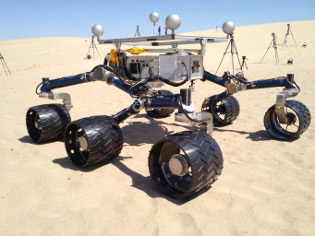 That testing often takes place in the Mars Yard, a physical test facility at JPL that features a simulated Martian landscape. There, a "Scarecrow" rover is run through challenges both imagined and encountered. Scarecrow is a full-size, stripped-down test vehicle that is 3/8 the mass of the real Curiosity to help simulate how the vehicle will act under the gravitational conditions of the red planet.

In the Mars Yard, "We put many very sharp rocks, fractured rocks, and we drove over them at great distances without any problems, but fundamentally the thing we did not do was embed those sharpest of rocks into cement or into an immovable portion of the ground," Heverly says.

And therein lies the rub. That's what the rover has been up against on Mars.

On Mars, "We had exposed bedrock that had been sharpened by millions of years of wind erosion, creating what geologists call 'ventifacts,' which are wind-sharpened rocks," says Heverly.

It is these embedded and abrading rocks that have posed a challenge to the Curiosity rover's wheels.

When the Scarecrow rover encountered rocks in the Mars Yard that had been buried as part of testing, the rover was so powerful that it simply pushed them out of the way. On Mars, some of the rocks are truly not movable, and if they are of the ventifact variety, they are sometimes particularly dangerous for the Curiosity rover's aluminum wheels. "So when they are encountered on Mars, the force between the wheels and the rocks is much greater than simply the weight of the vehicle on the rocks," says Heverly. "The thrust forces generated by the other wheels pushing that wheel into those embedded sharp rocks created very concentrated points of stress in the wheels, which resulted in failure of the skin of the wheels."

"We did not test in the most appropriate way, the right thickness of the wheels," Heverly says. ... "It was simply that the loads were much larger than we expected because of the way we drive the rover and how it interacts with cemented obstacles."

So in the end, Curiosity's aluminum wheel has paid a small price for some types of load-bearing forceful encounters, however hard or soft, short or long those contacts may be.

"We did expect some damage," says Heverly, but "the rate of damage accumulation was much faster than we expected."

Nonetheless, Curiosity soldiers on. The damage does not affect fundamental performance yet.

For the future, Heverly says that one thing being looked at is the algorithms that control the rover's motion, so that maybe the vehicle can be driven in a different way to reduce the loads between the rocks and the wheels when certain situations are encountered. The JPL team is also looking at ways to help identify, whether from an orbiting spacecraft or from the rover on the Mars surface, these particularly formidable and sharp ventifact rock structures, which are not always obvious using the rover cameras or in images from orbiting craft.

As for next-generation Mars rover design, Heverly says there is a dedicated team taking a fresh look at the wheel designs for the new Mars 2020 rover (launch scheduled July/August 2020). Those wheel designs will be tested in a whole different way, and "they are much thicker," he adds. 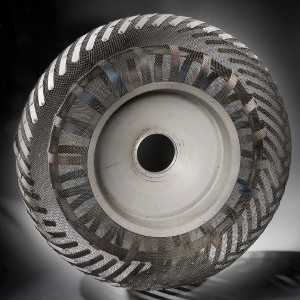 New design inspiration? This spare wheel from the lunar roving vehicle (LRV) for the Apollo 15, 16, and 17 moon missions was made of steel piano wire and titanium treads to give it a cushioning, non-rigid structure. [Image courtesy: Smithsonian National Air and Space Museum]

"We are also getting smarter about how we design the grousers," Heverly says. "We're learning about terramechanics and how we interact with that with the rigid wheels ... we're also looking down the line and revisiting if rigid wheels are really the right thing."

Heverly says one source of design inspiration is the wheels on the lunar roving vehicle (LRV) deployed on the moon during Apollo 15, 16, and 17 in the early 1970s. Those moon-buggy wheels were made of a woven mesh of zinc-coated steel piano wire with titanium treads riveted to them.

Piano wire may not do the trick on Mars, but Heverly says a new design could incorporate something like super-elastic materials, for example. "We're definitely revisiting compliant wheels vs. rigid wheels for the future," he says.