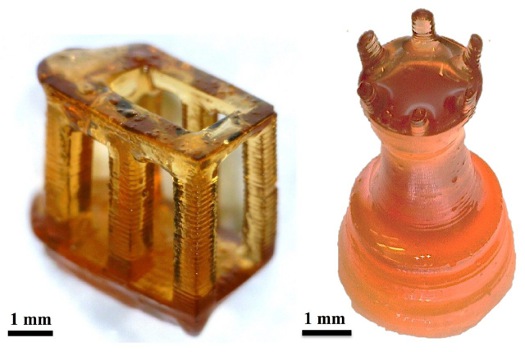 Virginia Tech researchers were able to 3D print a polymeric material known as Kapton into this lattice structure and chess piece. Previously, this material could only be produced in sheets. The team says this new method could one day be used in spacecraft or satellites. [Credit: Virginia Tech]

Virginia Tech researchers have created a novel way to 3D print the type of high-temperature polymeric materials commonly used to insulate spacecraft and satellites from extreme heat and cold.

Previously, the polyimide could only be made in sheets.

The material, formally known as Kapton, is an aromatic polymer composed of carbons and hydrogens inside benzene rings, which provides exceptional thermal and chemical stability. But because of this molecular structure, the material is notoriously difficult to produce in any format other than thin sheets. Kapton often is used in the multi-layer insulation that forms the outer wrapping of spacecraft, satellites, and planetary rovers to protect them from extreme heat and cold. It often is mistaken for "gold foil."

During a year-long process, researchers from the College of Engineering and College of Science were able to synthesize the macromolecules, allowing them to remain stable and maintain their thermal properties for processing in 3D printing. With this breakthrough, the high-performance polymer now could theoretically be used in any shape, size, or structure. And not just within the aerospace industry. The same material can be found in scores of electronic devices, including cell phones and televisions. 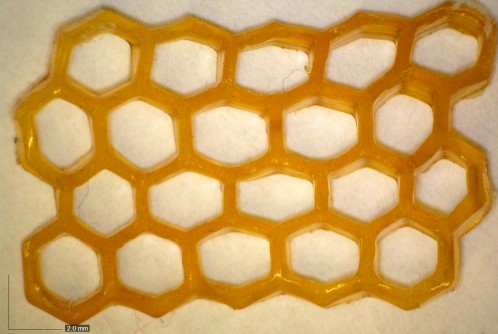 This raw 3D-printed ploymeric material known as Kapton, created and printed at Virginia Tech, might one day be used in space vehicles or satellites because of its ability to withstand high temperatures. [Credit: Virginia Tech]

"Conventional processing routes have limited engineers to make only thin films from these materials," said Christopher Williams, an associate professor with the Department of Mechanical Engineering in the College of Engineering and leader of the Design, Research, and Education for Additive Manufacturing Systems (DREAMS) Laboratory. "Now that we can 3D print these materials, we can start designing and printing them into much more complex 3D shapes, which allows us to take advantage of their excellent properties over a much broader range of applications."

Materials currently used in 3D printing do not have the high strength and stiffness across broad hot-cold temperature ranges necessary for the extremes of space. Typically, printable polymers start to lose their mechanical strength at about 300 F.

This new polymer maintains its properties above 680 F, the research team said. "We are now able to print the highest temperature polymer ever -- about 285 F higher in deflection temperature than any other existing printable polymer. Additionally, our 3D-printed material has equivalent strength to the conventionally processed thin-film Kapton material," Williams said.

The material's heat-resistant ceiling before degradation is 1,020 F.

"We can imagine this being used for printing a satellite structure, serving as a high-temp filter or a high-temp flow nozzle," said Williams, the Electro-Mechanical Corporation Senior Faculty Fellow in Advanced Manufacturing Systems. "We can imagine using the wide geometric and microscale possibilities offered by 3D printing to further improve existing designs -- say, a more lightweight satellite, a filter that provides optimum/efficient flow, a nozzle with a designed flow path that allows greater exit velocity and efficiency."

A key early breakthrough in the project occurred in the laboratory of Timothy Long, a professor with the Department of Chemistry, part of the College of Science, and also the director of the Macromolecules Innovation Institute (MII), located within Virginia Tech's Institute for Critical Technology and Applied Science. Williams is associate director of MII.

Printing the unprintable from VT ME on Vimeo.

There, Long, working with then-post-doctorate researcher Maruti Hegde, now a research associate at the University of North Carolina at Chapel Hill, was exploring the possibility of making 3D-printed shapes from aromatic polymers, such as Kapton. The researchers, along with a graduate student team, were able to derive the novel polymer synthesis design, allowing the polyimide to be 3D printed. Williams' lab, led by College of Engineering doctoral students Viswanath Meenakshisundaram, of Bangalore, India, and Nicholas Chartrain, of Westfield, NJ, then exacted the process for 3D printing.

"We chose a fairly ubiquitous high-temperature and high-strength polymer because we wanted to enable a rapid impact on existing technologies," Long said, adding that being able to create such 3D-printed materials in any shape could serve a key market, such as the aerospace industry. Indeed, Long said companies have already shown early interest in the new material, which has a U.S. patent filed. 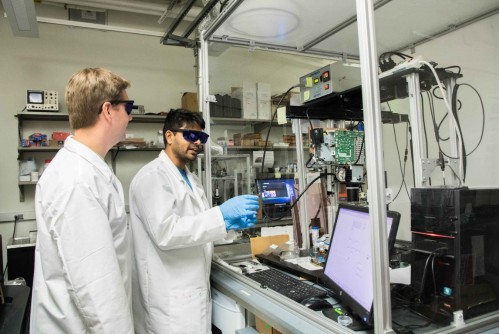 Inside the DREAMS Lab at Goodwin Hall, Associate Professor Christopher Williams and doctoral student Viswanath Meenakshisundaram stand at a high-tech 3D-printing machine. Using the machine to print out the polymeric material requires users and onlookers to wear filtered eyewear, because of the machine's use of lasers. [Credit: Virginia Tech]

The two teams spent a year testing the material's performance in extreme heat and cold temperature scenarios and fine-tuning how the material is machine printed. Williams' and Long's work recently was published in the Advanced Materials Journal under a fitting title, "Processing the Nonprocessable."

"At the end of the day, we are each other's biggest cheerleaders," Williams said of his work with Long's lab in the College of Science. Long added, "We challenge each other with how polymer structures must be invented, or reinvented, to enable 3D printing. We often joke that I am a post-doctorate researcher in the DREAMS lab and he is a post-doctorate researcher in my lab. It is truly a partnership for innovation."