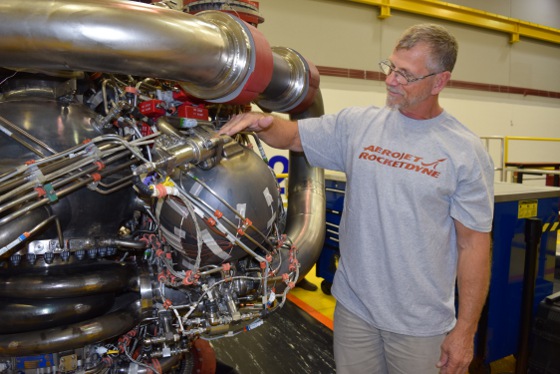 During flight, a rocket may experience powerful up-and-down vibrations mainly due to the engines and propellant in the feed lines. This is called the pogo effect and is similar to the up and down motion of bouncing on a pogo stick. The 3D-printed part tested, called the pogo accumulator, is a beachball-sized piece of hardware that acts as a shock absorber by regulating liquid oxygen movement in the engine to prevent the vibrations that can destabilize a rocket's flight.

The part is made "in two halves within weeks, compared to hand construction which can take years," they said.

By 3D printing the pogo accumulator, more than 100 welds were eliminated, reducing costs by nearly 35 percent and production time by more than 80 percent. Initial reports show the 3D-printed hardware performed as expected, opening the door for more components scheduled for future tests.

The test was part of the SLS Program's RS-25 affordability initiative -- a collaborative effort between NASA and industry partner Aerojet Rocketdyne of Canoga Park, CA, to reduce the engine's overall production costs while maintaining performance, reliability, and safety.

"As we build future RS-25s, NASA and our partners are taking advantage of innovative manufacturing techniques, including additive manufacturing, or 3D printing, to make the engines more affordable," said Andy Hardin, engine integration hardware manager for the SLS Program at NASA's Marshall Space Flight Center in Huntsville, AL. "3D printing is revolutionizing manufacturing, and the pogo accumulator is the first of many components that can be built more quickly and less expensively." 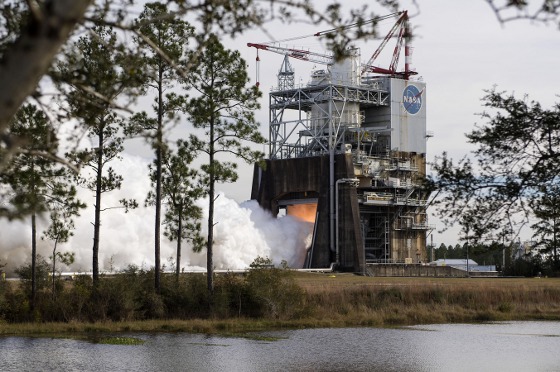 To minimize the costs of developing SLS, NASA selected the RS-25 engine to leverage the assets, capabilities, and experience of the Space Shuttle Program. NASA's fleet of 16 heritage engines have been modified with new controllers and other changes to allow them to launch the more powerful SLS on its first four flights. The SLS Program has ordered six new engines to be built by Aerojet Rocketdyne for future flights.

"With modern fabrication processes, including additive manufacturing, the next generation of the RS-25 will have fewer parts and welds, reducing production time as well as costs," said Carol Jacobs, RS-25 engine lead at Marshall.

Jacobs, who began working with the space shuttle main engine when she joined NASA in 1983, is excited about how new, 21st-century practices can help streamline the production process.

"Reducing the number of welds is very important," she said. "With each weld comes inspections and possible rework. By eliminating welds, we make the hardware more reliable and the process much more lean and efficient, which makes it more cost effective."

"Future tests will incorporate more and more 3D-printed components, with each test series building on the previous tests," said Hardin.

NASA and Aerojet Rocketdyne plan to incorporate dozens of components made using additive manufacturing techniques into the new RS-25 engines. In addition, nearly every other major component, including the main combustion chamber, nozzle, ducts, valves, electrical and running gear, will incorportate affordability improvements using a variety of advanced manufacturing processes. The innovative processes, along with design changes, will eliminate more than 700 welds and more than 700 parts, while reducing engine costs.

SLS, which is managed by Marshall, will enable a new era of exploration beyond Earth's orbit, launching astronauts in the Orion spacecraft on deep-space exploration missions to the Moon and eventually to Mars. On the first flight of SLS, the rocket will send an uncrewed Orion thousands of miles beyond the Moon before the spacecraft returns to Earth. 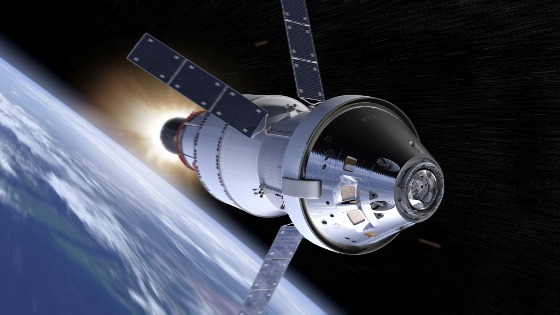 During Exploration Mission-1, Orion will venture thousands of miles beyond the moon during an approximately three-week mission. [Credits: NASA]

Launch of the SLS rocket will be fueled by four RS-25 engines firing simultaneously to generate 2 million lb of thrust and working in conjunction with a pair of solid rocket boosters to produce more than 8 million lb of thrust. RS-25 engines for the initial SLS flights are former space shuttle main engines, modified to provide the additional power needed by the larger SLS rocket.

The four heritage RS-25 engines and flight controllers that will power SLS on that first flight have been certified and are awaiting shipment to NASA's Michoud Assembly Facility in New Orleans, where they will be joined to the SLS core stage. Major welding on all five parts of the rocket's core stage for EM-1 has also been completed, and the hardware is ready for additional outfitting and testing.