Stealth aircraft in the Canadian arctic will be no match for a new quantum radar system.

Researchers at the University of Waterloo in Canada are developing a new technology that promises to help radar operators cut through heavy background noise and isolate objects -- including stealth aircraft and missiles -- with unparalleled accuracy.

"In the Arctic, space weather such as geomagnetic storms and solar flares interfere with radar operation and make the effective identification of objects more challenging," said Jonathan Baugh, a faculty member at the Institute for Quantum Computing (IQC) and a professor in the Department of Chemistry who is leading the project with three other researchers at IQC and the Waterloo Institute for Nanotechnology. "By moving from traditional radar to quantum radar, we hope to not only cut through this noise, but also to identify objects that have been specifically designed to avoid detection. 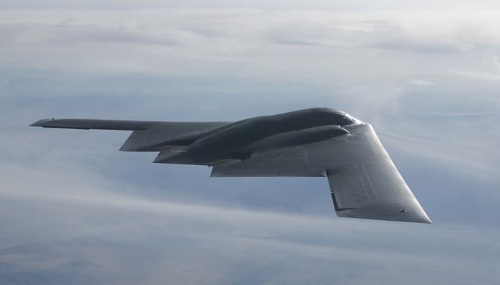 The B-2 Stealth Bomber on a polar-flight test mission from Edwards Air Force Base, CA. [U.S. Air Force photo by Bobbi Zapka]

Stealth aircraft rely on a special paint and body design to absorb and deflect radio waves -- making them invisible to traditional radar. They also use electronic jamming to swamp detectors with artificial noise. With quantum radar, in theory, these planes will not only be exposed, but also unaware they have been detected.

Quantum radar uses a sensing technique called quantum illumination to detect and receive information about an object. At its core, it leverages the quantum principle of entanglement, where two photons form a connected, or entangled, pair.

The method works by sending one of the photons to a distant object, while retaining the other member of the pair. Photons in the return signal are checked for telltale signatures of entanglement, allowing photons from the noisy environmental background to be discarded. This can greatly improve the radar signal-to-noise in certain situations.

But in order for quantum radar to work in the field, researchers first need to realize a fast, on-demand source of entangled photons.

"The goal for our project is to create a robust source of entangled photons that can be generated at the press of a button," said Baugh. 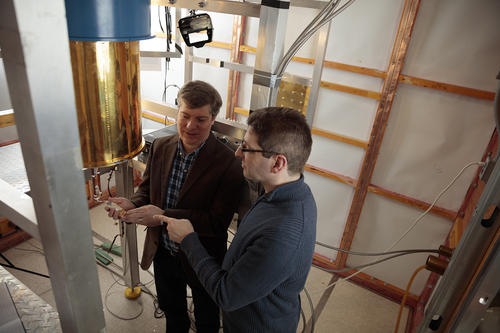 Jonathan Baugh and Francois Sfigakis look at a sample for the dilution refrigerator at the Institute for Quantum Computing in Waterloo.

To date, quantum illumination has only been explored in the laboratory. The Government of Canada, under the Department of National Defence's All Domain Situational Awareness (ADSA) Science & Technology program, is investing $2.7M to expedite its use in the field.

The 54 North Warning System (NWS) radar stations, based in the Arctic and operated by the North American Aerospace Defense Command (NORAD), are nearing the end of their life spans and could need to be replaced as early as 2025.

"This project will allow us to develop the technology to help move quantum radar from the lab to the field," said Baugh. "It could change the way we think about national security."