Lockheed Martin has created a 3D-printed titanium dome for a satellite fuel tank so big that you can't even put your arms around it. The 46-in.- diameter vessel completed final rounds of quality testing this month, ending a multi-year development program to create giant, high-pressure tanks that carry fuel on board satellites. 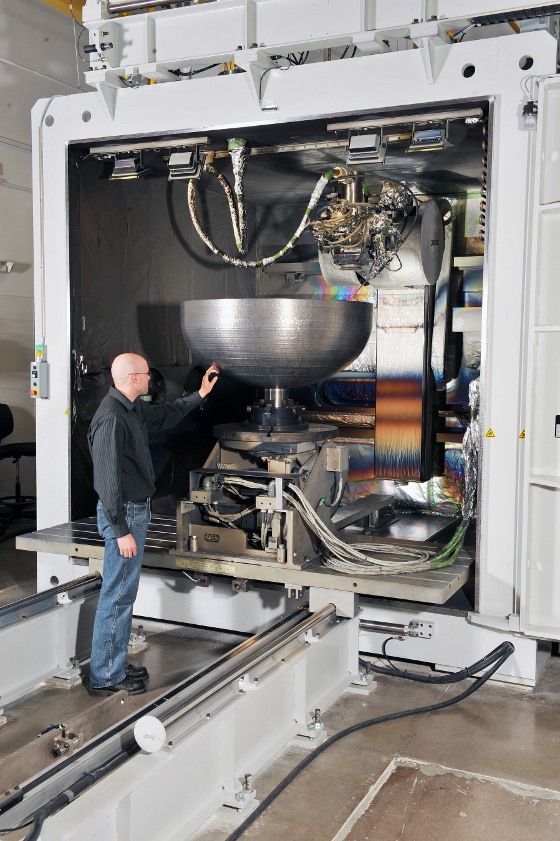 A Lockheed Martin engineer inspects one of the 3D-printed dome prototypes at the company's space facility in Denver. The final dome measures 46 in. in diameter -- large enough to fit 74.4 gallons of liquid.

"Our largest 3D-printed parts to date show we're committed to a future where we produce satellites twice as fast and at half the cost," said Rick Ambrose, Lockheed Martin Space executive vice president. "And we're pushing forward for even better results. For example, we shaved off 87 percent of the schedule to build the domes, reducing the total delivery timeline from two years to three months." 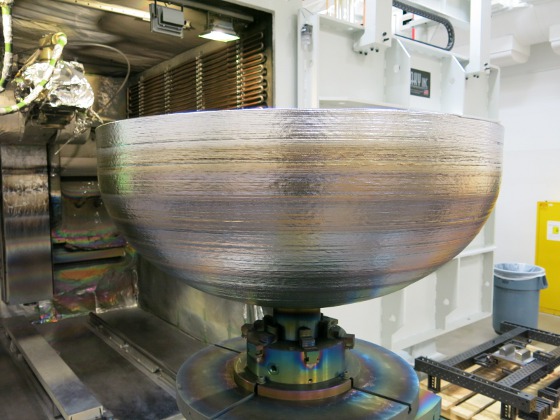 Satellite fuel tanks must be both strong and lightweight to withstand the rigors of launch and decade-long missions in the vacuum of space. That makes titanium an ideal material, but procuring 4-ft-diameter, 4-in.-thick titanium forgings can take a year or more, making them the most challenging and expensive parts of the tank. Traditional manufacturing techniques (subtractive/milling) also meant that more than 80 percent of the material went to waste. Now, 3D printing eliminates all that lost material for the domes, and the titanium used for printing is readily available with no wait time.

"We self-funded this design and qualification effort as an investment in helping our customers move faster and save costs," explained Ambrose. "These tanks are part of a total transformation in the way we design and deliver space technology. We're making great strides in automation, virtual reality design, and commonality across our satellite product line. Our customers want greater speed and value without sacrificing capability in orbit, and we're answering the call." 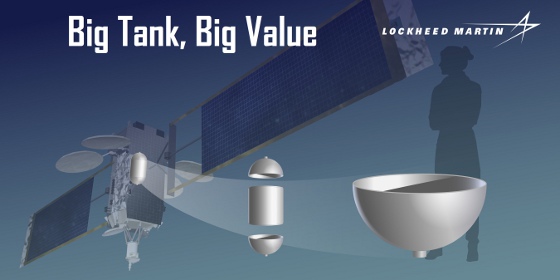 This infographic shows the scale of the 3D-printed domes, their placement on the tank, and overall location within an LM 2100 satellite. 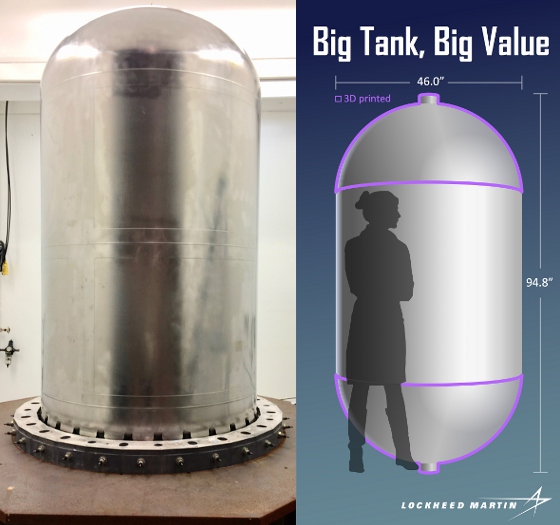 The new fuel tank for Lockheed Martin's largest satellites uses 3D-printed domes that cap off the cylinder. Using this manufacturing method, tank delivery time went down from two years to three months. On the left, the tank is seen in a test fixture, with a 3D-printed dome seamlessly integrated into the body of the tank.

Even the smallest leak or flaw could be catastrophic for a satellite's operations, so Lockheed Martin engineers went to great lengths to ensure the printed tanks meet or exceed the performance and reliability required by NASA. Engineers and technicians rigorously evaluated the structure, conducting a full suite of tests to demonstrate high tolerances and repeatability.

The tank domes are a leap in size for qualified 3D-printed materials. The largest part previously qualified was a toaster-size electronics enclosure for the Advanced Extremely High Frequency satellite program. Lockheed Martin's recent accomplishment is part of the growing momentum of designing, making, and using 3D-printed parts to great effect recent years. Since the company launched the first-ever printed parts into deep space aboard NASA's Juno spacecraft, it has produced thousands of flight components and even more for tooling and prototyping using a variety of metals and composites.

Technicians used EBAM to produce these domes in the largest 3D printer at the Lockheed facility in Denver. Lockheed Martin now offers the tank as a standard product option for LM 2100 satellite buses.

As the most widely scalable metal additive manufacturing solution in the industry (in terms of work envelope), Sciaky's EBAM systems can produce parts ranging from 8 in. (203 mm) to 19 ft (5.79 m) in length. EBAM is also the fastest deposition process in the metal additive manufacturing market, with gross deposition rates ranging from 7 to 25 lb (3.18 to 11.34 kg) of metal per hour.

EBAM brings quality and control together with IRISS® -- the Interlayer Real-time Imaging and Sensing System -- which is the only real-time adaptive control system in the metal 3D-printing market that can sense and digitally self-adjust metal deposition with precision and repeatability. This innovative closed-loop control is the primary reason that Sciaky's EBAM 3D-printing process delivers consistent part geometry, mechanical properties, microstructure, and metal chemistry -- from the first part to the last.