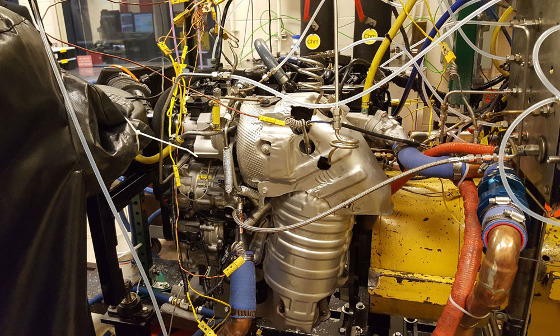 The next time you shop for a new FCA vehicle, don't be surprised if there's a turbocharged four-cylinder engine under the hood. There won't be any disappointment, though, as the turbo four matches some larger engines for power while also delivering improved fuel economy.

The change is underway at FCA: The all-new 2018 Jeep Wrangler and restyled 2019 Jeep Cherokee can be equipped with a turbocharged 2.0-liter four-cylinder engine rated at 270 hp.

Even so, FCA Powertrain engineers have their sights on delivering more efficiency without sacrificing performance. Getting there means more pressure (boost) and higher compression ratios. Doing that will generate more heat in the cylinder head, which sees some of the highest temperatures in an internal combustion engine.

A major challenge, though, is overcoming the strength and thermal limits of the aluminum alloys used today for cylinder heads. Those alloys, known as 319 and 356 grades, begin to severely weaken above 200 degrees Celsius (392 degrees Fahrenheit).

Now, a cooperative research effort between FCA, the federally funded Oak Ridge National Laboratory in Tennessee, and casting supplier Nemak has created a new aluminum alloy that stays strong up to 300 C (572 F).

In addition to staying strong at higher temperatures, this new alloy can be cast and machined using existing technologies and costs only 7 percent more than today's alloys -- all key goals of the three-year, $3.5-million project sponsored by the federal government under a cooperative research and development agreement known as a CRADA.

This new alloy, known as 16HT or ACMZ, may enable engineers narrow the "bridge" areas in the cylinder head -- the areas of metal between the valves, the spark plug, and the direct fuel injector. Narrowing the bridges frees up room for larger valves or even a second spark plug, giving engineers the flexibility to tailor an engine for the desired balance of performance and efficiency.

The capabilities and potential uses for ACMZ earned it a spot on R&D Magazine's widely respected R&D100 Awards in 2017.

Copper is the key
ACMZ has one key difference from today's automotive aluminum alloys (alloys are a mixture of multiple metallic elements): It does not use silicon as the strengthening component. Instead, ACMZ uses copper.

Aluminum alloys with copper are not new, explains Gregg Black, senior manager in Advanced Powertrain Engineering at FCA. However, they are expensive, produced in low volumes, and haven't been used in the auto industry due to a tendency for the part to develop small cracks during solidification after casting, an issue known as "hot tear."

This is where Oak Ridge National Laboratory played an important role. Oak Ridge's advanced probes let engineers understand down to the atomic level what happens with an alloy as it cools, inspecting the formation, size, and location of strengthening elements called precipitates.

Oak Ridge also houses the Titan supercomputer -- ranked as the third most-powerful supercomputer in the United States and seventh in the world.

"The Titan and ICME let the team focus only on truly promising candidates instead of spending time on trial and error," Black says. "It's like 'Star Wars' stuff for us, creating new alloys in the computer without having to pour it."

Work gives FCA a head start
FCA and its partners have applied for four patents on the new alloy. Because it was developed with government sponsorship, other companies will have the opportunity to use the new material when it becomes commercially available. But being on the ground floor of development gives FCA a head start, Black notes.

Other automakers tackled the aluminum alloy high-temperature issue at the same time as FCA, picking their own partners and establishing CRADAs with the government. Those efforts did not use copper as the strengthening agent.

"When we focused on copper, other people in the industry almost laughed us off, saying we'd never be able to cast that," Black says. "We knew there was competition, including other teams working at Oak Ridge National Labs, but we outperformed everyone on this."

It will still be a few years before ACMZ appears in a production engine. But FCA and Nemak have already cast more than 100 cylinder heads with the alloy, using a current production design, and have put several hundred hours of dynamometer testing on some prototypes.

Also, castings made with ACMZ have been machined on the same equipment used for current production cylinder heads to prove that the new alloy is compatible with today's manufacturing technology. The only likely change in the manufacturing process for ACMZ involves refining the heat-treatment ovens used after the part is cast, Black says.

FCA powertrain engineers still have plenty of development work to do with ACMZ, documenting its design and performance capabilities to share with engine development teams. The knowledge gained creating ACMZ can also be helpful as engineers look for better performing materials for other powertrain components.

"We are just getting started on the process to create a design, now that we have a material that will work," Black says. "We feel like we really have a tiger by the tail."

The aluminum-copper-manganese-zirconium alloys -- or ACMZ -- were developed at ORNL in just under four years, which is lightning speed when it comes to developing a complex alloy. Affordable, lightweight, and capable of withstanding temperatures 100 degrees Celsius higher than commercially available automotive cast alloys, ACMZ is proving to be suitable for the next generation of internal combustion engines, enabling the industry to advance toward its target of 54.5 mpg by 2025. 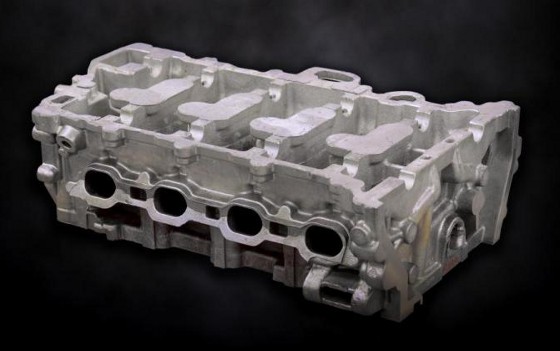 Current alloys inhibit engine efficiency because they soften at the peak temperatures present in highly efficient advanced engines. Automakers need an alloy that can take the heat, is durable, and can be used in existing manufacturing processes. ACMZ meets all these parameters. The journey to ACMZ began in 2012, with a challenge from DOE's Vehicle Technologies Office for a new high-performing alloy. A multidisciplinary team of materials, metallurgical, and computational scientists led by ORNL's Amit Shyam stepped forward and embarked on the development plan with help from industry partners FCA US and Nemak U.S.A.

"We knew this was going to be a steep goal to achieve in four years," says Allen Haynes, leader of the Materials Processing and Joining Group at ORNL. "To put it in perspective, it typically takes 10 to 20 years to develop a new material."

"One thing we do well at ORNL is apply scientific capabilities to solve challenging technological problems," Shyam says. "We have a unique combination of tools, expertise, and capabilities that allow us to do interdisciplinary research beyond what industry can do. Our tools allow us to take a new approach to understanding an existing material."

"We started by looking at RR350. This alloy stood out from the rest because it had remarkable high-temperature properties but had poor casting behavior and wasn't affordable due to expensive nickel and cobalt additions," Shyam says.

The team put RR350 under the microscope and imaged and chemically analyzed it to the atomic scale, enabling a better grasp of its properties. "We began to understand what happens to the structure and stability of the material as it goes through various temperatures and stresses and, in the process, discovered how to make it stronger and more castable while also eliminating expensive elements," Shyam says. Using ORNL's Titan supercomputer, Shyam's team performed energy calculations on RR350 that provided key insight regarding its extraordinary stability. With RR350 serving as the baseline, ACMZ was soon born.

"The combination of our experimental research, computational calculations, and materials characterization capabilities, along with regular participation from our two industry partners, helped us develop ACMZ," Haynes says. "Early-stage research provided a fundamental breakthrough in metallurgy that was leveraged into the design of this new family of alloys." Testing continues with FCA and Nemak to evaluate the alloy's durability in engine applications. A cylinder head cast from ACMZ successfully completed FCA's rigorous dynamometer test on a turbocharged engine in December 2017, and internal evaluations of ACMZ will continue throughout 2018.

"Everyone in the industry wants an alloy that has this combination of capabilities: easy to manufacture, able to be cast in complex designs, can take the heat and yet still offers required strength and endurance," Haynes says. "The potential for this new family of alloys to impact the automotive industry by expanding engine design space to enable affordable advances in fuel economy and performance is remarkable."