These crystalline structures show great promise because they can absorb almost all wavelengths of light. Perovskite solar cells are already commercialized on a small scale, but recent vast improvements in their power conversion efficiency (PCE) are driving interest in using them as low-cost alternatives for solar panels.

In the cover article of the June 28, 2018, issue of Nanoscale, a publication of the Royal Society of Chemistry, the research team reveals a new scalable means of applying a critical component to perovskite cells to solve some major fabrication challenges. The researchers were able to apply the critical electron transport layer (ETL) in perovskite photovoltaic cells in a new way -- spray coating -- to imbue the ETL with superior conductivity and a strong interface with its neighbor, the perovskite layer. 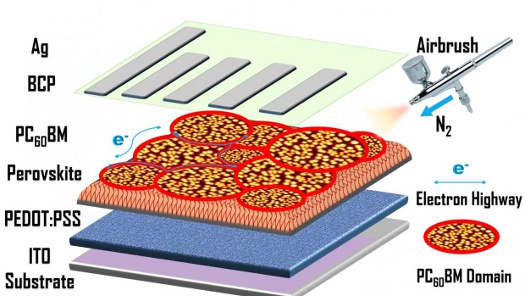 A model of a perovskite solar cell, showing its different layers. Professor André D. Taylor has been working to solve fabrication challenges with perovskite cells.

The research is led by André D. Taylor, an associate professor in the NYU Tandon School of Engineering's Chemical and Biomolecular Engineering Department, with Yifan Zheng, the first author on the paper and a Peking University researcher. Co-authors are from the University of Electronic Science and Technology of China, Yale University, and Johns Hopkins University.

When the positively and negatively charged layers are separated, the architecture behaves like a subatomic game of Pachinko in which photons from a light source dislodge unstable electrons from the ETL, causing them to fall toward the positive HTL side of the sandwich. The perovskite layer expedites this flow. While perovskite makes for an ideal intrinsic layer because of its strong affinity both for holes and electrons and its quick reaction time, commercial-scale fabrication has proved challenging, partly because it is difficult to effectively apply a uniform ETL layer over the crystalline surface of the perovskite.

The researchers chose the compound [6,6]-phenyl-C(61)-butyric acid methyl ester (PCBM) because of its track record as an ETL material and because PCBM applied in a rough layer offers the possibility of improved conductivity, less-penetrable interface contact, and enhanced light trapping.

"Very little research has been done on ETL options for the planar p-i-n design," said Taylor. "The key challenge in planar cells is, how do you actually assemble them in a way that doesn't destroy the adjacent layers?"

The most common method is spin casting, which involves spinning the cell and allowing centripetal force to disperse the ETL fluid over the perovskite substrate. But this technique is limited to small surfaces and results in an inconsistent layer that lowers the performance of the solar cell. Spin casting is also not applicable to commercial production of large solar panels using such methods as roll-to-roll manufacture, for which the flexible p-i-n planar perovskite architecture is otherwise well suited.

The researchers instead turned to spray coating, which applies the ETL uniformly across a large area and is suitable for manufacturing large solar panels. They reported a 30 percent efficiency gain over other ETLs -- from a PCE of 13 percent to over 17 percent -- and fewer defects.

Added Taylor, "Our approach is concise, highly reproducible, and scalable. It suggests that spray coating the PCBM ETL could have broad appeal toward improving the efficiency baseline of perovskite solar cells and providing an ideal platform for record-breaking p-i-n perovskite solar cells in the near future."