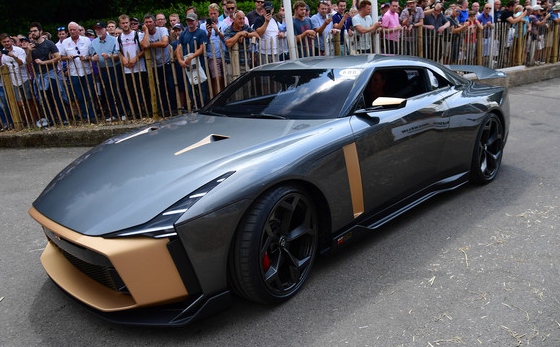 In the space of only one year, Nissan and vehicle design house Italdesign have dreamed up a prototype and made the 50th anniversary GT-R50 concept come to life -- and they've done it with a Midas touch.

Based on the 2018 Nissan GT-R NISMO (starts at $175,490), the 710-hp gold-accented and heavily modified sports coupe made its debut at the U.K.'s Goodwood Festival of Speed in July, with rumors swirling that the million-dollar special edition could be destined for a real-world limited run of hand-built production vehicles.

"How often do you get to ask, 'What if we created a GT-R without limits,' and then actually get to build it?" says Alfonso Albaisa, Nissan's senior vice president for global design.

The answer is, "Not very often." Albaisa got together with Italdesign (who is also celebrating its 50th anniversary in 2018) at the Geneva Motor Show in March 2017, and that's when the ideas first started flying. The trick was to find a way to fuse the tradition of Italian handcraftsmanship with what Albaisa terms the "Japenese borderline science fiction culture of GT-R." The result is something special -- but you gotta like extra flare and flashes, and you really gotta like gold.

Starting at the front, the Nissan GT-R50 by Italdesign features a distinct golden inner element that stretches across almost the full width of the vehicle. It looks like it might telescope out and become something else. The hood has a more pronounced power bump, and the thin LED headlights stretch from the wheel arch to the lip above the outer cooling intakes. 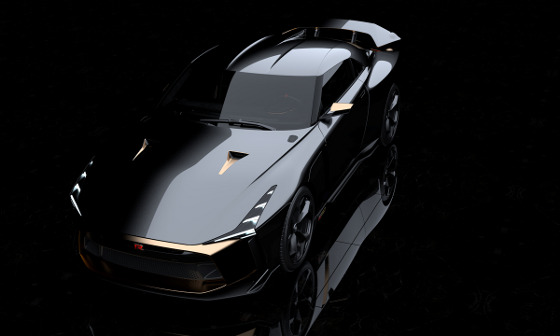 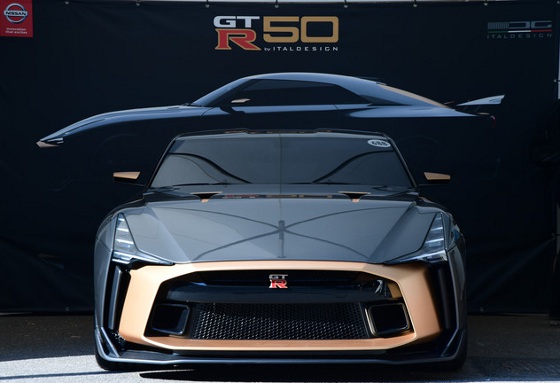 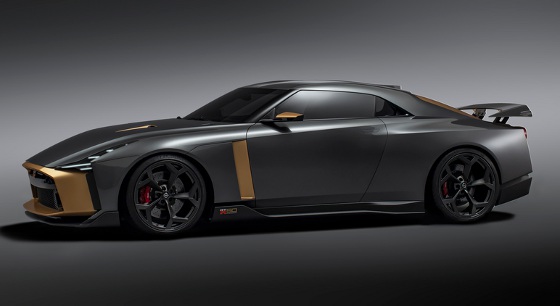 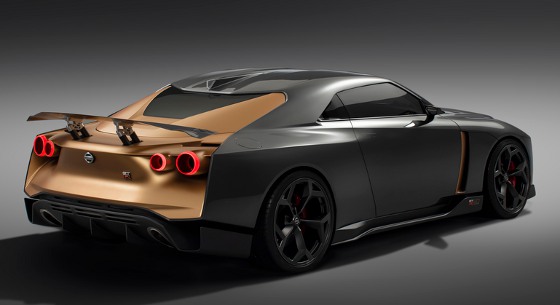 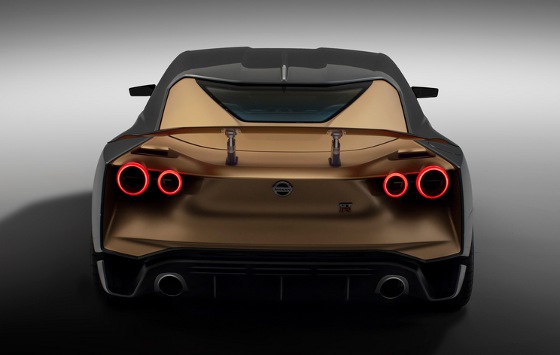 Dominating the side view, the distinctive roofline has been lowered by 54 mm. It features a lower center section, while the slightly raised outer portions give the roof profile an even more muscular look. The signature GT-R "samurai blade" cooling outlets behind the front wheels are made more prominent with a gold inlay, which extends from the bottom of the doors to the shoulder line.

The high-performance sports car has a wide stance and purposeful flares around the wheels. The shoulder line tapers around the base of the rear window and draws toward the center of the trunk lid. To add some more drama, the rear window line descends longer and deeper than on the standard car. Combined with more gold elements, it appears as a separate modular element of the rear structure.

The back view is probably the coolest. The GT-R50's twin round taillights have been reimagined as a separate "floating" feature with thin light rings and hollow centers, mounted so they join the outer buttress and the central portion of the trunk structure. A large, adjustable rear wing, mounted with two uprights, gives it an even flashier, upscale fast-and-furious look. 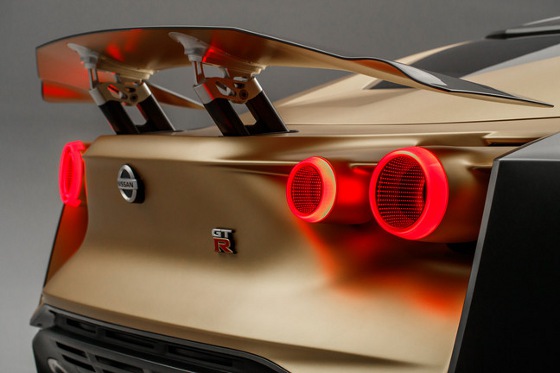 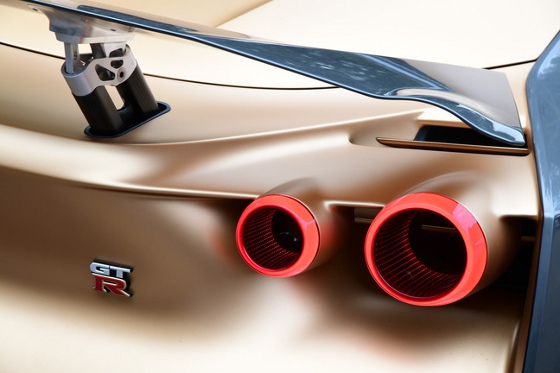 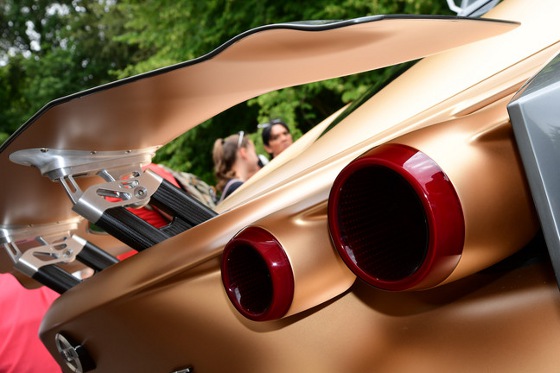 The wheels are custom (21 x 10 in. in front and 21 x 10.5 in. in back). Michelin Pilot Super Sport tires, sized 255/35 R21 in the front and 285/30 R21 in the rear, add a level of grip needed to harness the engine's power. The exterior is finished in Liquid Kinetic Gray paint with distinctive Energetic Sigma Gold anniversary accents.

Inside, the Nissan GT-R50 by Italdesign holds onto its high-performance pedigree. Two different carbon fiber finishes are used extensively across the center console, instrument panel, and door linings, along with black Alcantara and fine black Italian leather on the seats. Gold accents repeat the exterior treatment across the instrument panel, doors, and the futuristic race car-inspired switchgear. The bespoke steering wheel's central hub and spokes are made of carbon fiber, while the rim features a flat bottom and matching Alcantara trim. 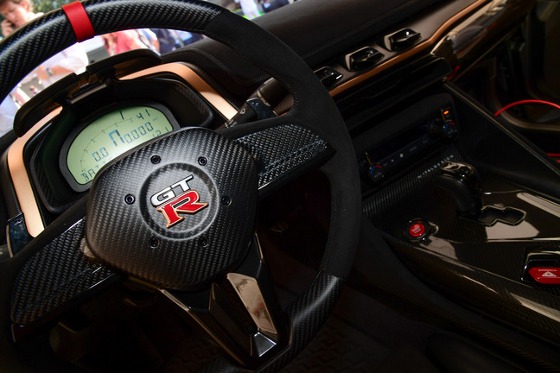 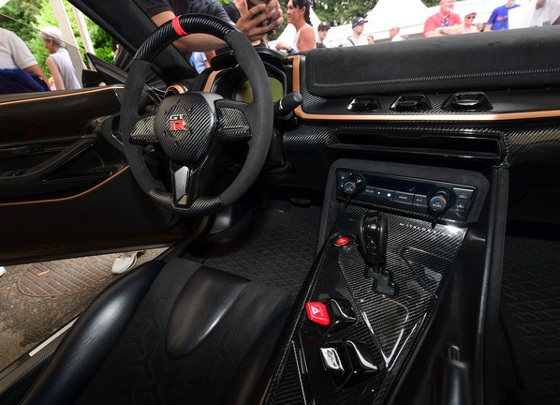 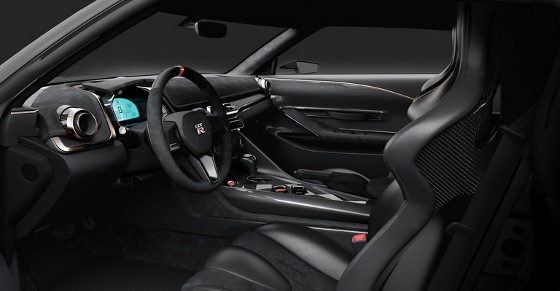 As for power, the NISMO organization enhanced the hand-assembled 3.8-liter V6 VR38DETT engine to produce an estimated 720ps (710 hp) and 780 Nm of torque. 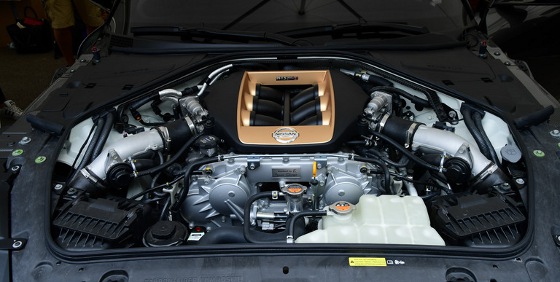 If all goes according to word on the street, the Nissan GT-R50 by Italdesign could be available next year -- probably 50 units to go with the 50th anniversary theme. 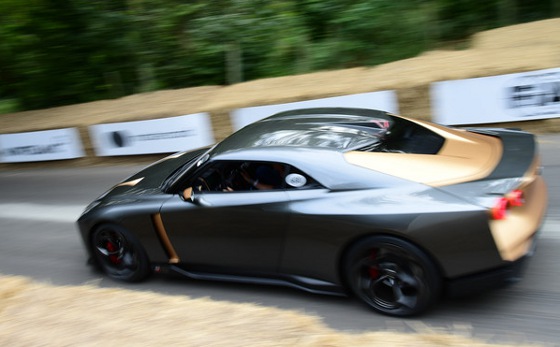