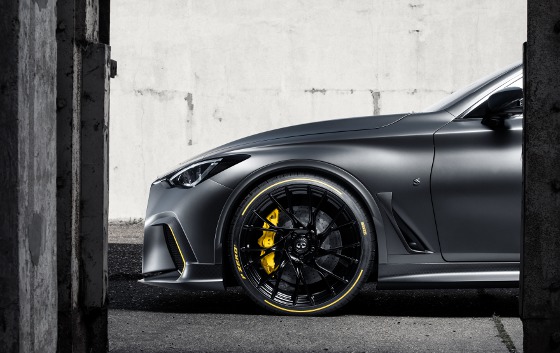 The next-gen evolution of the Geneva 2017 design study, the Project Black S prototype boasts many new developments. These include weight reduction, a motorsport-inspired interior, an aero-effective and purposeful bodywork update, and significant powertrain advancements -- with a world's first energy-recovery system that harvests energy under braking and acceleration.

INFINITI's research and development center in Atsugi, Japan, also played an important role, having developed the donor Q60 RED SPORT 400 sports coupe upon which Project Black S is based. The reseach and development center has assisted in the integration of the powertrain technology, advising on engineering proposals from the Renault Sport Formula One Team. 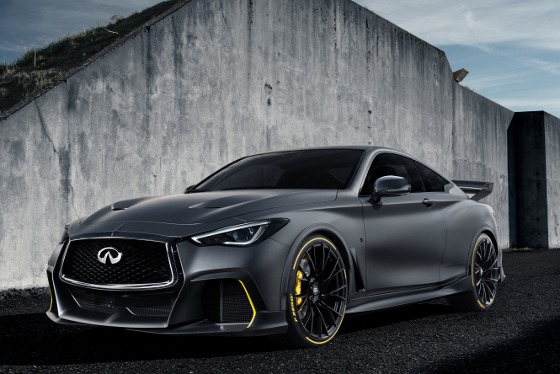 Part of INFINITI's motivtion is to explore the potential for a new model grade that offers progressive levels of product enhancement -- above and beyond the existing RED SPORT 400 specification currently available on select models. This could include higher power, torque, and performance from innovative powertrains, new or uprated suspension systems, and unique design elements.

Also keep in mind that from 2021, all new INFINITI models will feature electrified powertrains, so this concept provides more experimentation in the brand's crossover path toward performance-oriented powertrain electrification.

Dual-hybrid powertrain
Engineered in collaboration between INFINITI and the Renault Sport Formula One Team, and under development specifically for road use, the Project Black S prototype features a world's first dual-hybrid powertrain technology. Not only does it harvest kinetic energy under braking, it also harvests heat energy from the engine's twin-turbo system, making it the first of its kind (technical regulations mean Formula One powertrains harvest heat energy from a single turbocharger).

The testbed vehicle fuses high-performance dual-hybrid technology with INFINITI's award-winning VR30 3.0-liter V6 twin-turbo engine. Its unique energy-recovery system contributes to greater power and torque than the engine upon which it is based. Where the conventional VR30 engine produces 298 kW (400 hp/405 ps), the dual-hybrid powertrain prototype generates 420 kW -- equivalent to 563 hp or 571 ps. 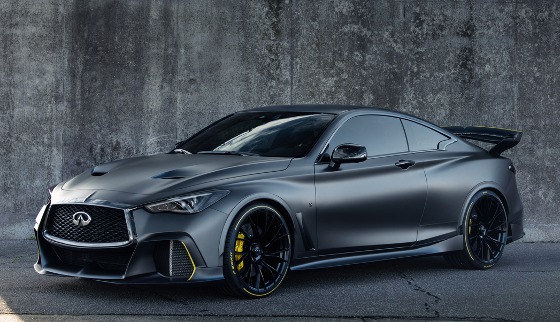 Electrical energy harvested by the three MGUs (AC permanent magnet synchronous motors) is stored in a high-rate-discharge 4.4-kWh lithium-ion battery pack, located in the rear compartment. As in a Formula One powertrain, the power recovered by the MGUs and stored in the battery pack is deployed in two ways. First, it acts as an electrically assisted anti-lag system, spooling up the turbine blades within both e-turbos more quickly, increasing the amount of air recirculated back into the engine to boost power. Second, energy stored in the battery can be used to power the MGU-K, feeding up to 120 kW of additional electric power directly into the drivetrain. The result is that the dual-hybrid technology enables a significant increase in performance for instantaneous, lag-free acceleration.

In the development prototype, the extra electric power is applied to the rear axle through a newly designed final drive assembly on the rear axle, which integrates the MGU-K. 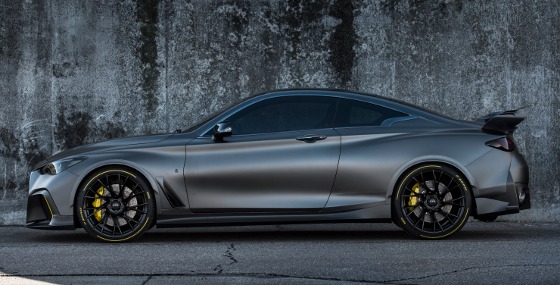 With 420 kW (571 ps/563 hp) -- 41% more than the Q60 Red Sport 400 -- the prototype can accelerate from 0 to 100 kph in under 4 seconds. Furthermore, the dual-hybrid system uses the MGU-K system to provide a high-response electrically assisted launch control system. With the battery pack sufficiently charged, the low down torque of the electric motor -- paired with a helical gear limited-slip differential to manage power delivery to the rear wheels -- enables maximum acceleration from a standstill. 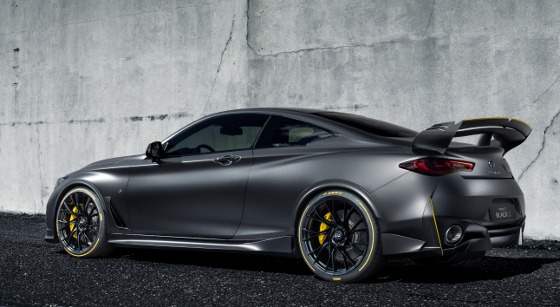 The prototype offers drivers complete control over how the powertrain uses its electric power with three Formula One-inspired drive modes: Road, Quali, and Race. Each alters the way in which the powertrain gathers and discharges energy.

Road mode offers the most flexible and efficient use of electric power, for use in conventional driving conditions. It recharges the battery on the go with low-level, non-invasive energy recovery, ensuring the driver can call upon a quick burst of acceleration to overtake another vehicle or gather speed when joining a highway. It can provide a small boost to the efficiency of the engine under acceleration, and the dual-hybrid system delivers its power to ensure the car can excel at road-legal speeds.

Quali Mode offers ultimate on-track performance, deploying as much power as possible under acceleration and enabling the prototype to carry on building speed, even on longer straights. In this mode, the prototype harvests more kinetic energy under heavy braking as the driver approaches a corner (compared to Road mode, where the increased kinetic braking effect would negatively impact the driver's ability to drive smoothly). Accelerating away from the turn, the battery then discharges energy to help the car gather speed quickly, even as the MGU-H continues to recover heat energy. 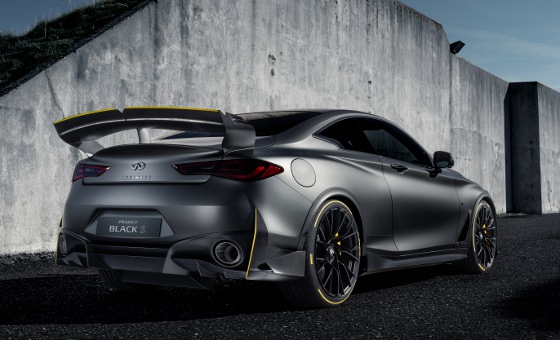 Race mode is designed to offer a sustained deployment of energy for use on the track. In this mode, in contrast to Quali mode, the prototype releases energy under acceleration where its deployment can maximize on-track performance or lap times, and saves energy elsewhere if needed. Of the three modes available, Race mode is most similar to that used by the Renault Formula One Team throughout the course of a full race.

In addition to the three drive modes, drivers can also adapt the car's anti-lock braking (ABS) and traction control systems with adjustable modes for road and track driving.

Making it all fit
The 2017 Project Black S show car proposed an initial vision for motorsport-inspired aesthetics and aerodynamics. The aerodynamics of the new 2018 prototype have been optimized using computational fluid dynamics software to deliver more effective powertrain cooling and enhanced downforce.

Similarly, INFINITI has called upon the Renault Sport Formula One Team's expertise in production techniques and its use of more advanced materials. Many of the Q60's body panels, including the hood, fenders, and roof, have been replaced with lightweight carbon fiber panels.

Other elements of the exterior -- such as the twin titanium exhaust tips -- have been crafted using 3D-printing technology, used by the motorsport team to rapidly create and trial new components for their race cars.

The carbon fiber rear wing has a similar aerodynamic profile to the Renault Sport Formula One Team's Monza wing, which provides a relatively low level of downforce for a Formula One car around one of the faster circuits in the sport's calendar, but for a development vehicle based on a road car, the impact is significant. 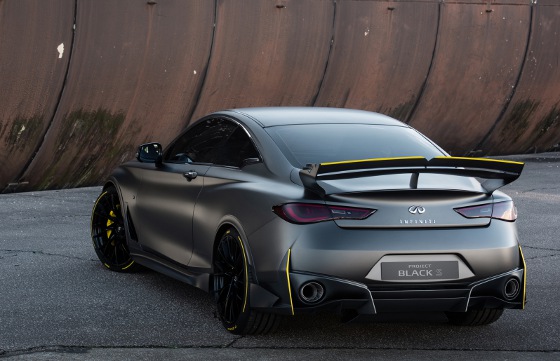 The designers and engineers devised several creative ideas to integrate the highly intrusive dual-hybrid powertrain within the existing body and platform. Rapid digital prototyping became crucial to the success of the project, enabled by the close collaboration between the two alliance partners and their pared-back design and engineering teams.

The engine bay of the Q60 donor car is packaged in such a way to accommodate the twin-turbo VR30 3.0-liter V6 engine. However, there was initially no space for either of the two MGU-H units, or the independent hybrid cooling circuits. This meant moving and repackaging the existing engine cooling system and installing a new high-efficiency radiator. A small section of the body has been cut out to accommodate the MGU-H system, with the Atsugi research and development center using its knowledge of the body structure to reinforce the body elsewhere -- making the front section of the bodyshell even stronger in the process.

Further back in the car, the MGU-K system, lithium-ion battery pack, and ancillary components required even more attention. The rear suspension crossmember has been modified to accommodate the MGU-K. A new cooling system for the MGU-K has been installed, placing the radiator core beneath the rear floor and channeling air through the center diffuser. Advanced computational fluid dynamics software enabled the development team to make a number of alterations to the design of the car's undercarriage to enable the diffuser and cooling duct to work in parallel with the rear wing to aid cooling and air flow.

One of the most visible changes has been the removal of the Q60's rear seats, creating additional space for the 4.4-kWh battery pack, energy inverter, and hybrid electronic control unit. Following its track car development brief, designers have been free to eliminate the rear passenger compartment, instead creating more space to house the dedicated wire looms required to carry high-power outputs between the different power sources and outlets.

The powertrain itself adds around 200 kg to the overall weight of the vehicle -- however, this presented engineers with the opportunity to find weight savings elsewhere to lower its overall center of gravity, and even redistribute weight for more favorable driving characteristics. 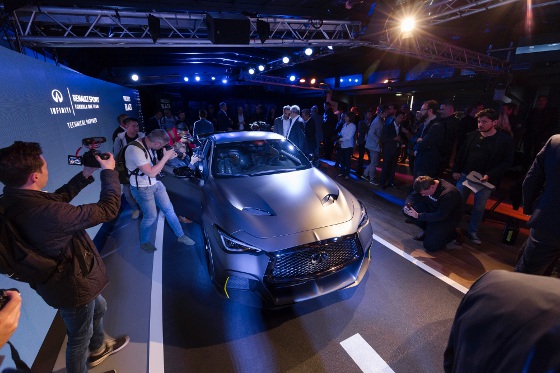 With the introduction of so much additional weight, the development aim for engineers from INFINITI and the Renault Sport Formula One Team was weight neutrality -- to return the prototype as close as possible to its original 1,752-kg curb weight. The development team succeeded in bringing the curb weight of the Project Black S prototype back to 1,776 kg -- just 24 kg more than the donor car -- resulting in a 39 percent higher power-to-weight ratio.

The steel hood, trunk lid, fenders, and roof of the standard car have been replaced with lighter carbon fiber panels. As an example, the new hood is 3.02 kg lighter, while the trunk lid also weighs 2.7 kg less. The powered glass moonroof from the donor car has been removed, with the steel roof panel and assembly replaced with a carbon roof panel to reduce weight at the car's highest point by 10.2 kg.

The Q60 RED SPORT 400's 20-in. aluminum alloy wheels have been replaced by new 21-in. forged aluminum wheels (275/30 R21 at the front, 295/30 R21 at the rear). Created especially for the Project Black S prototype, the lightweight structure of the wheels means they offset any potential weight gain from their larger dimensions. The drilled and ventilated carbon-ceramic brakes also offered a significant weight saving. Despite the discs being larger than the Q60's iron brakes, they provide a combined weight saving of 22 kg. With more powerful calipers fitted accordingly (adding 6 kg), the prototype's brake system is 16 kg lighter overall than that of the donor car.

Inside, the removal of the rear bench and other rear passenger creature comforts has saved 19.5 kg of weight. The new front seats are also built around lighter carbon fiber shells and feature a slimmer design.

But all of this weight cutting does not mean that the interior is fully stripped. The Q60's cabin has been totally remodeled, offering a luxurious cockpit environment that has a minimalist, slick racer look. The front seats have new lightweight carbon fiber shells, while the donor car's technical metal trim is replaced with carbon fiber. The lithium-ion battery pack isn't left on display -- the rear bench is replaced with a new carbon fiber panel, fitted with tethers for the four-strap racing harnesses.

Following the conclusion of Project Black S, elements of the prototype's highly efficient development and validation process could be incorporated into development programs for future road cars, reducing their time to market and providing thrilling new drive possibilities along the way.