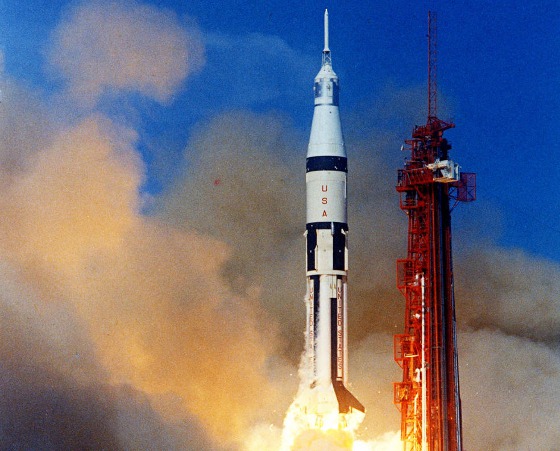 Apollo 7 lifts off from Cape Kennedy (now Cape Canaveral) Air Force Station's Launch Complex 34 on Oct. 11, 1968. It was the first of several piloted flights designed to qualify the spacecraft for the half-million-mile round trip to the Moon. [Credits: NASA]

On Oct. 11, 1968, three American astronauts launched to Earth orbit aboard Apollo 7. It was the first piloted mission of the spacecraft designed to meet President John F. Kennedy's challenge to land on the lunar surface.

The 11-day flight took place as the race to the Moon was heating up between the United States and the Soviet Union. A month earlier, the Soviets launched the unpiloted Zond 5, a simplified version of their Soyuz spacecraft designed for cosmonauts. The capsule became the first to circle around the Moon and return safely to Earth.

Both nations also were recovering from tragic losses. Three Apollo 1 astronauts perished in a launch pad fire on Jan. 27, 1967. That same year, the lone cosmonaut aboard Soyuz 1 died when the spacecraft crashed on April 24.

"We have a great group of specialists from government and industry trained to work as a team," he said. "Just as the astronauts are ready to fly to orbit, we are ready to get them there."

Schirra was joined by two members of the third astronaut class, both making their first spaceflight. Command module pilot Donn Eisele was a U.S. Air Force colonel and test pilot. Walt Cunningham had been a colonel and fighter pilot in the U.S. Marine Corps Reserve. Although there was no lunar module (LM) on this flight, as the third member of the crew, Cunningham was designated LM pilot. 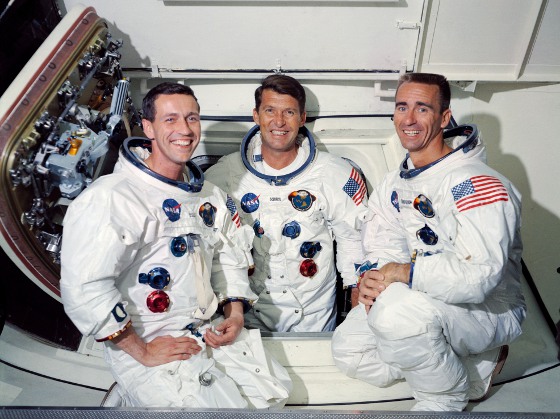 Photographed during training on May 22, 1968, the Apollo 7 crew pose at the hatch of their spacecraft. From the left are command module pilot Donn Eisele, commander Wally Schirra, and lunar module pilot Walt Cunningham. Installation of a quick-opening hatch mechanism was one of the crucial improvements added after the loss of the Apollo 1 crew. [Credits: NASA]

Following a flawless liftoff atop a Saturn 1B rocket from Launch Complex 34 at Cape Kennedy (now Cape Canaveral) Air Force Station, the command-service module (CSM) separated from the second stage. Eisele then practiced a simulated LM docking. During launch with a LM, it would have been housed inside the adapter between the second stage and the CSM.

The only sour note of the first day was that all three came down with head colds, which in weightlessness is much more of a nuisance than on the ground. Flight surgeons advised the crew to take decongestants to alleviate their symptoms.

FD2: Rendezvous Day
On orbit, Schirra, Eisele, and Cunningham prepared for the rendezvous with the Saturn IB rocket's S-IVB second stage stage. The maneuver would include the first two of the mission's planned eight burns of the spacecraft's Service Propulsion System (SPS). The engine, built by the Aerojet General Corporation, had a thrust of 21,000 lb and was planned to be used on later missions to insert the Apollo spacecraft into and out of lunar orbit. It was therefore a critical component of the lunar landing program, and the Apollo 7 crew thoroughly tested it during their mission. To focus on the preparation for the SPS burns, Schirra informed Mission Control that they would be cancelling the first television downlink event planned to occur prior to the first engine firing. It was rescheduled for Flight Day (FD) 4.

Left: The Service Propulsion System (SPS) engine can be seen at the bottom of this Apollo spacecraft during ground testing. Middle: The S-IVB stage seen at a distance during the rendezvous on FD2. Right: The S-IVB stage during a closer approach.

This first test of the powerful SPS took place on flight day two. At 26 hours 25 minutes into the flight, the SPS engine lit as planned. The force of the engine firing was stronger than the crew anticipated, pressing them back into their couches. Schirra exuberantly called down to Mission Control, "Yabadabadoo!" quoting Fred Flintstone from the popular television cartoon series. He added, "Great, man! That's like a ride and a half! ... That's a real kick in the center. That really socks it to you."

The engine fired for 9.36 seconds in the first step of the rendezvous maneuver, followed about 90 minutes later by the second SPS burn lasting just under 8 seconds. Both burns were completed as planned. The chase to the S-IVB was on.

The crew used the Service Module's Reaction Control System (RCS) thrusters to complete the rendezvous. As they approached the S-IVB to about 70 ft, Schirra reported to Mission Control that "it's tumbling rather wildly, so we are starting to stay away from it." Cunningham noted that the one Spacecraft LM Adapter panel that was only partially deployed on the first day was now fully deployed. After station keeping for about 25 minutes, they fired the RCS thrusters to separate from the S-IVB for the final time. They continued to track the stage through the remainder of the day using their spacecraft's sextant, out to a distance of 184 miles, an activity they continued into FD3. 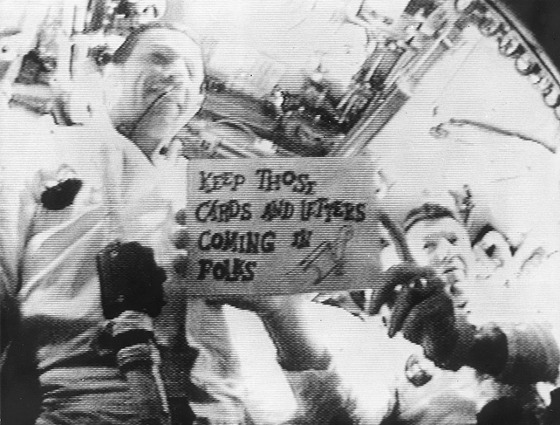 By the end of the second day, about 90% of the mission's primary objectives had been met. The crew still had more than a week left in their mission, with six additional SPS engine firings, several TV downlinks, and additional tests of spacecraft systems.

After the excitement of their first two days on orbit, during which they completed a transposition and docking maneuver, an initial separation from, a rendezvous with, and a final separation from, their Saturn IB rocket's S-IVB second stage, the Apollo 7 astronauts settled down to conduct spacecraft checkout activities. Over the next three days, they conducted the first live television broadcasts from an American spacecraft, a third test of the Service Propulsion System, tests of the Service Module radiators and the spacecraft evaporator, and radar tests with the White Sands Missile Range (WSMR) in New Mexico.

To stay fit, all three astronauts spent time working out on a portable exercise device called the Exer-Genie. The colds they first reported on the first mission day seemed to improve as the flight proceeded. The crew photographed various sites on the Earth to study land and weather phenomena using a modified Hasselblad 70-mm camera. They concluded their long-distance observations of the S-IVB stage using their spacecraft's sextant out to a distance of 320 miles. Three teams of controllers in Mission Control at the Manned Spacecraft Center (MSC), now the Johnson Space Center in Houston, led by Lead Flight Director Glynn S. Lunney and Flight Directors Eugene F. "Gene" Kranz and Gerald D. Griffin, working in eight-hour shifts, continued to monitor the flight.

"Made for TV" moments
Another goal of the mission was broadcasting live television from the spacecraft. The first live TV broadcast from an American spacecraft took place about 72 hours into the Apollo 7 mission. The event had to be timed with spacecraft passes over the continental United States, because only the ground stations in Corpus Christi, TX, and Merritt Island, FL, had the equipment to receive the signals and convert them into the proper format for broadcasting.

The crew, clearly visible in their spacecraft, held up two cue cards that read "From the Lovely Apollo Room High Atop Everything" and "Keep Those Cards and Letters Coming In, Folks." Capsule Communicator Thomas P. Stafford joked that, "We'll have Cecil B. DeStafford down here directing," referring to award-winning filmmaker Cecil B. DeMille. The total length of the historic broadcast was seven minutes. 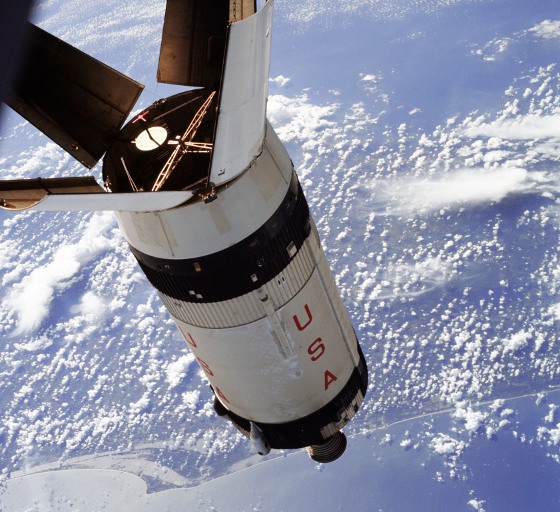 Following launch, the Apollo 7 crew photographed the expended Saturn launch vehicle's second stage, called the S-IVB. NASA's Kennedy Space Center and Cape Kennedy (now Cape Canaveral) Air Force Station are visible on the lower left. The round, white disc inside the open panels of the S-IVB is a simulated docking target similar to that used for docking with a lunar module. [Credits: NASA]

The second TV broadcast took place at about 95 hours (nearly 4 days) into the mission. The crew provided a tour of their spacecraft, demonstrating how spacious it was compared to previous American capsules, and highlighting several of the instrument panels. The crew held up two cue cards with the questions, "Are you a turtle, Deke Slayton?" and "Paul Haney, are you a turtle?" The latter question was addressed to the Director of Public Affairs at MSC. Neither man provided an immediate response as required by the inside joke. [Editor's note: Apparently, the questioned referenced a drinking game.]

At about 119 hours (nearly 5 days) into the mission, the crew conducted the third TV broadcast of the flight. During this 11-minute broadcast, the astronauts demonstrated food preparation techniques, explaining that for the first time on an American spacecraft hot food was available using a hot water dispenser to rehydrate food packages. They also demonstrated how they had been vacuuming some small puddles of water condensate and dumping them overboard.

After five days in orbit, both the crew and the spacecraft were performing very well. Since Apollo 7 was an open-ended mission, Flight Directors gave the crew daily permissions to continue the flight. So far, there were no major issues that would prevent a full-duration 11-day mission.

[This article is one of a continuing series on the countdown to the 50th anniversary of Apollo 11. Look for more in future issues of Designfax.]