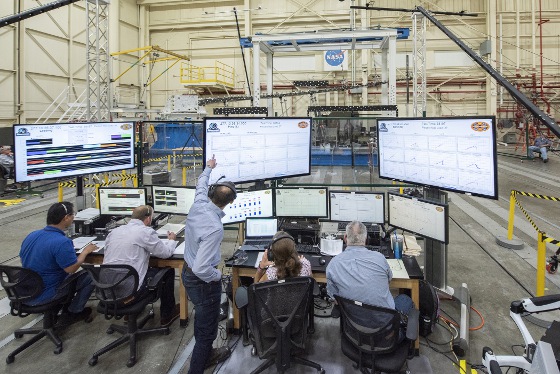 The PAT wing was tested during two phases in September and October at NASA's Armstrong Flight Research Center in California. The experimental test article was tested with more than 10,000 sensors, making it one of the most densely instrumented test articles ever tested at Armstrong. 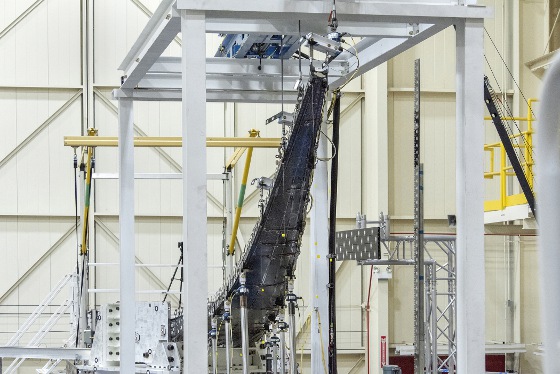 Tow steering composite technology, which refers to the way the carbon fibers are laid out, was used to build the wing skins. The concept was expected to passively control flutter, or vibration, on the wings through structural design that can also help minimize gusts for a smoother ride. The wing bent and twisted at the same time during the design load tests to make it more robust and controllable, but there were tense moments.

"There were a lot of unknowns going into the testing," Taminger said. "We had to make some assumptions and some simplifications in order to be able to do the design and analysis leading up to building the test article and beginning the testing. However, it worked better than I could have imagined. There were a lot of nervous moments as I watched that wingtip pass the 80-in. (bending) mark. It was awesome and scary at the same time."

"I didn't know how much the skins would contribute to the overall response of the wing," Taminger explained. "That's why we needed so much instrumentation. We are trying to go back through the huge number of data points to quantify the responses we observed."

The wing was more flexible than predicted, as was observed from early on in the October testing. To accommodate the increase flexibility, the test team made some modifications in the test setup.

"We have to go determine why those results are different," Taminger said. "We expect we will find the answer, and it will allow us to add fidelity to our models and then see if we can better match the data we measured." 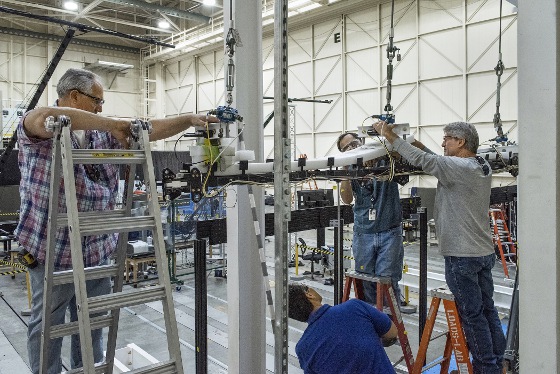 Researchers also were pleased by an "unexpected, but hoped for" view of the wingtip turning in on the leading edge as a result of the towed steering concept. From an airflow perspective, that would move the loading inboard into the thicker section of the wing where there is more structure that could passively alleviate gusts.

Once the models are refined, Taminger wants to see the test wing scaled up to full size for a commercial transport aircraft to assess the benefits. In the end, the amount of fuel that can be saved by using such a wing will determine where the research will go. A longer wing usually requires more structure, but the tow steering concept could allow researchers the combined benefits of drag and weight reductions -- which translate into fuel-burn advantages.

The challenging research had another benefit.

"We learned how to test highly flexible, high-aspect-ratio wings," said Larry Hudson, Armstrong Flight Loads Laboratory chief test engineer. "We also learned how to use a unique overhead loading system to meet our test objectives. When you have highly flexible wings, you have a lot of displacement at the tip. The technique we used worked well. We look forward to future opportunities to test other flexible wing designs."

The project is funded through NASA's Aeronautics Research Mission Directorate's Advanced Air Transport Technology (AATT) project. AATT envisions enabling lightweight wings that are as much as twice as efficient as conventional wings on commercial and military aircraft.

The test wing was designed by Aurora Flight Sciences facilities in Dayton, OH, and fabricated at the company's manufacturing plant in Columbus, MS.