A research team led by City University of Hong Kong (CityU) has developed a novel strategy to develop new high-strength alloys that are extremely strong and yet also ductile and flexible. The strategy overcomes the critical issues of the strength-ductility trade-off dilemma, paving the way for developing innovative structural materials in the future.

Multiple principal-element alloys, generally referred as high-entropy alloys (HEAs), are a new type of materials constructed with equal or nearly equal quantities of five or more metals. They are currently the focus of attention in materials science and engineering due to their potentially desirable properties for structural applications. Yet most of the alloys share the same key detrimental feature: the higher the strength of an alloy, the less the ductility and toughness, meaning that strong alloys tend to be less deformable or stretchable without fracture. 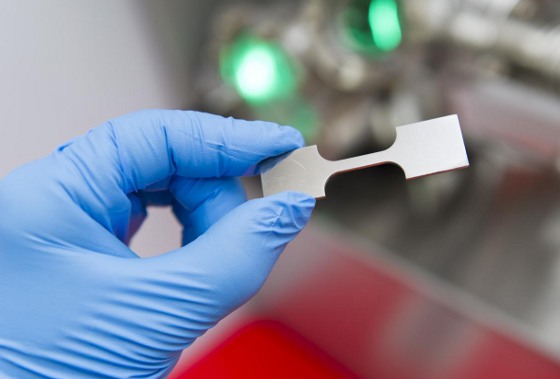 The new alloy Al7Ti7 exhibits a superior strength of 1.5 gigapascals and ductility as high as 50 percent in tension at ambient temperature. [City University of Hong Kong]

Recently, however, research led by Professor Liu Chain Tsuan, University Distinguished Professor of the Department of Materials Science and Engineering at CityU, has found a breakthrough solution to this daunting decades-long dilemma by making high-entropy alloys both strong and yet also very ductile through massive precipitation of nanoscale particles. This cutting-edge research has just been published in the latest issue of the journal Science, titled "Multicomponent intermetallic nanoparticles and superb mechanical behaviours of complex alloys."

Solving the strength-ductility tradeoff
"We are able to make a new high-entropy alloy called Al7Ti7 ((FeCoNi)86-Al7Ti7) with a superior strength of 1.5 gigapascals and ductility as high as 50 percent in tension at ambient temperature. Strengthened by nanoparticles, this new alloy is five times stronger than that of the iron-cobalt-nickel (FeCoNi)-based alloy," says Professor Liu.

"Most conventional alloys contain one or two major elements, such as nickel and iron to manufacture," he explains. "However, by adding additional elements of aluminium and titanium to form massive precipitates in the FeCoNi-based alloy, we have found both the strength and ductility have significantly increased, solving the critical issue of the trade-off dilemma for structural materials."

Moreover, high-strength alloys usually face plastic deformation instability, known as the necking problem, meaning that when the alloy is under a high strength, its deformation would become unstable and very easily lead to necking fracture (localized deformation) with very limited uniform elongation. But the team has further found that by adding "multicomponent intermetallic nanoparticles," meaning complex nanoparticles made of different element atoms, it can greatly strengthen the alloy uniformly by improving the deformation instability.

Tackling the "necking problem"
The team has found the ideal formula for these complex nanoparticles, which consists of nickel, cobalt, iron, titanium, and aluminium atoms. Professor Liu says each of the nanoparticles measures just 30 to 50 nanometers. The iron and cobalt atoms, which replace some of the nickel components, help to reduce the valence electron density and improve the new alloy's ductility. On the other hand, replacing some of the aluminium with titanium largely reduces the impact of moisture in the air to avoid induced embrittlement in this new strong alloy.

He estimates that the new alloys developed with this novel strategy will perform well in temperatures ranging from -200 C to 1,000 C. Hence, they can act as a good base for further development for structural use in cryogenic devices, aircraft and aeronautic systems, and beyond.