Retro-inspired new Porsche 911 is a slick and sleek update 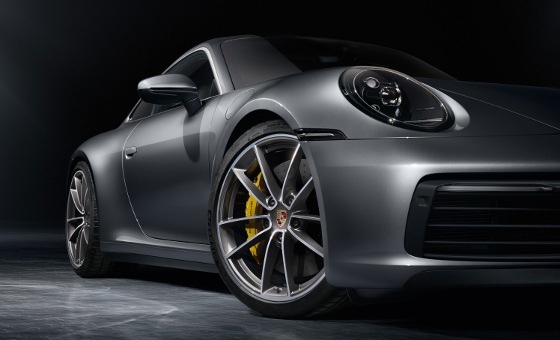 The 8th generation of the Porsche 911 features a design language that pulls from the past to create something powerfully new in the form of the Carrera S and Carrera 4S models. While the front and the dash feature elements that are clear nods to much earlier models, the rear and the next-gen flat-six turbocharged engine tech -- which provides 443 hp, an improvement of almost 25 hp from the current model -- are clearly modern updates.

The car was unveiled at the 2018 Los Angeles Auto Show at the end of November.

The new 911, also called the type 992, has a more toned and muscular physique, but it still retains that classic rear-engine sportscar look. It is timeless and yet modern, and maintains the line's DNA through and through.

"The 911 embodies a unique language of form. The silhouette alone speaks for itself: everyone immediately recognizes its clearly drawn contours. So our first task was to identify those properties that we wanted to either alter or accentuate even more strongly," says Peter Varga, Porshce exterior designer. "In my view, the 911 has acquired ever-better proportions over the years. We've continued this development by broadening the new generation at both the front and the rear. In the process, we aim to make the 911 even stronger, racier, and sharper." 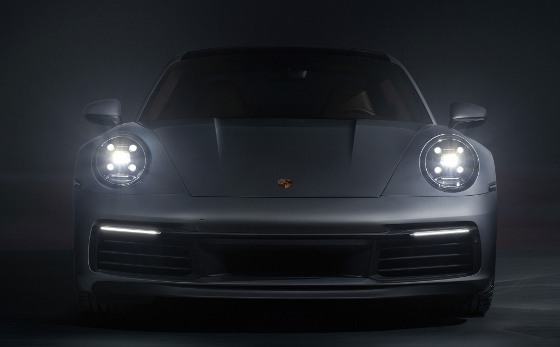 "The broader front part is very good for the car in general," Varga says. "The main part of the body with the passenger compartment has been kept comparatively slender. The flatter doors bring out the more powerful fender ensemble. At the same time, the rear wheels are now an inch larger, which means the car stands much better on the road. This also accentuates where the drive system is located and, therefore, where all the power comes from. Because of the aerodynamics, the rear is, of course, the most fascinating part for us designers. The 911 needs a lot of downforce on the rear axle, and we also wanted to further improve the drag coefficient. These requirements -- combined with the sloping roofline -- were a major challenge that required intensive attention." 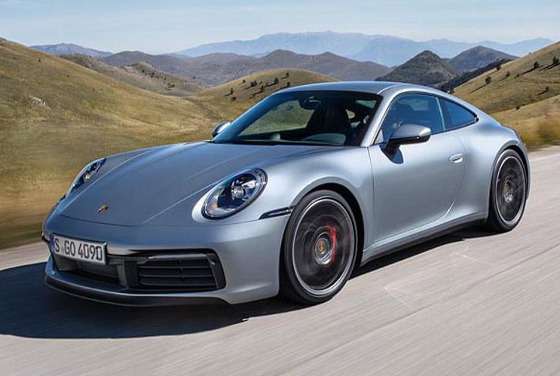 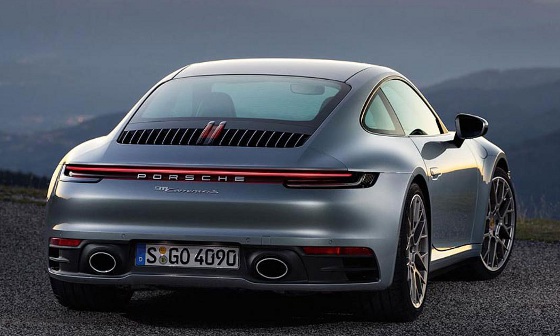 The exterior design is completely new. Significantly wider wheel housings arch over the 20-in. front wheels and 21-in. rear wheels. The rear end is now the same width across all models, highlighting the slimline center section. At the front, the body is 45 mm wider. Flush integration of the electrical pop-out handles in the doors adds to the tapered and smooth side contour. Between the new LED headlights, a front hood with a pronounced recess evokes the design of the first 911 generations.

The rear is dominated on all models by the significantly wider, variable-position rear spoiler and the seamless, elegant single-piece light bar (nice touch!). Apart from the front and rear sections, the entire outer skin is now made from aluminium.

"I'm very pleased that a single, continuous strip of lighting is now integrated into the rear of the 911," says Varga. "This purist approach adds the final touch to the clean, clearly structured design of the new 911. We've moved all of the additional elements like the license plate, crest, tailpipe trim, and auxiliary lights down, which places the 911 visually closer to the road." 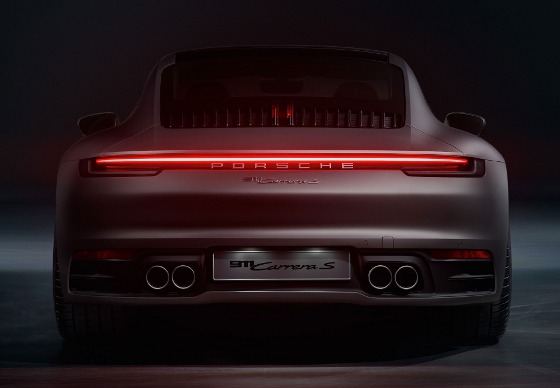 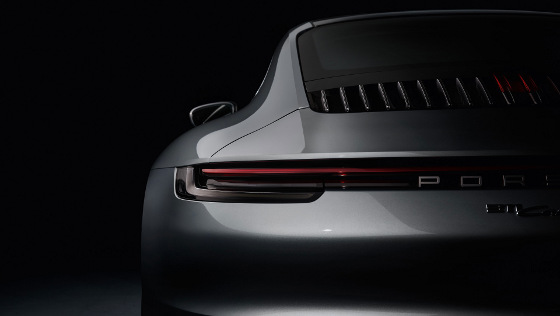 The turbocharged flat-six engines also enter a new generation with the new 911. In addition to compliance with the latest emissions standards by way of a gasoline particulate filter, the primary focus of advanced development here was on further enhancing performance. New, larger turbochargers with symmetrical layout and electrically controlled wastegate valves, a completely redesigned charge air cooling system, and the first-time use of piezo injectors combine to attain engine improvements in all relevant areas: responsiveness, power, torque characteristic, endurance, and revving ability.

Equipped with the 8-speed Porsche Doppelkupplung (PDK) dual clutch transmission as standard, the rear-wheel-drive 911 Carrera S Coupe needs just 3.5 sec to reach 60 mph from standstill, and the 911 Carrera 4S Coupe with all-wheel drive takes only 3.4 sec. This makes both cars 0.4 sec faster than the previous model in each case. This advantage is increased by a further 0.2 sec with the optional Sport Chrono Package, to 3.3 sec for the Carrera S and 3.2 sec for the Carrera 4S. The top track speeds are now 191 mph (911 Carrera S) and 190 mph for the all-wheel-drive version. A manual transmission will be offered at a later date.

With the PDK transmission, the power of the engine is transferred even more efficiently to the road. PDK allows extremely fast gear changes without interrupting the flow of power -- not even by a millisecond. In comparison to previous generations, the new 8-speed PDK also offers a perceptibly wider middle ground between comfort, performance, and efficiency.

The interior is distinctive, with the clear, straight lines and recessed instruments defining the dashboard. The 911 models from the 1970s provided the inspiration here. As it does in the original 911, the new dashboard covers the entire width between two horizontal wing levels.

Alongside the centrally positioned rev counter, two thin, frameless freeform displays deliver information to the driver. Just shy of 11 in., the center screen of the Porsche Communication Management (PCM) system can be operated quickly and efficiently (screen was 7 in. in the previous model). Below it, a docked-on control panel of five buttons with the look of a classic toggle switch creates the transition to the center console with touchpad. 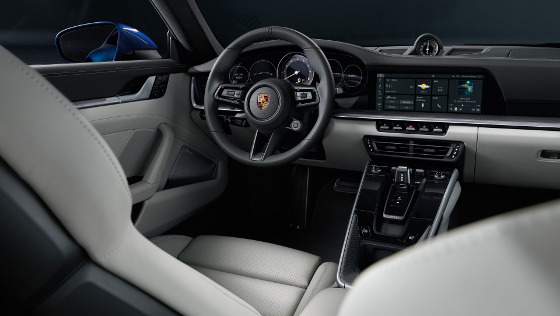 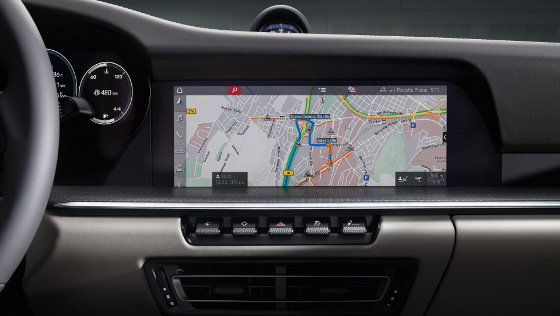 "In designing the new 911, it was also very important for us to consider the evolutionary changes throughout all the previous generations," says Ivo van Hulten, Porsche interior designer. "In the original 911, for example, the interior had a marked horizontal character with everything on a single line. As of the late 1980s, a greater focus was placed on technology. With the new 911, we're emphasizing new materials and the return to a horizontal layout. An emotional, tactile experience was paramount to the design of the central console's elements."

"We also wanted to make the control concept as simple and clear as possible," says van Hulten. "A new generation of steering wheels corresponds directly to the instrument cluster, so the controls are now much more streamlined and accelerated. We've integrated a larger touchscreen of 10.9 inches into the center display. Its functions are arranged more simply than on the previous model, which means it can be used faster and with less potential for distraction." 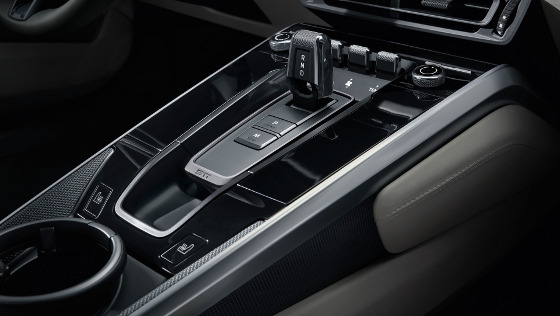 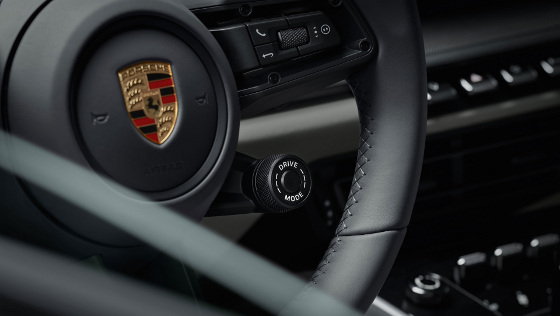 Van Hulten says he is especially proud of the instrument cluster design. "It shows a nice balance between analog and digital. The analog rev counter in the middle complements the digital cluster with its five circular gauges that no longer overlap."

The seats have also been modified. The new design reduces the vehicle weight by around 6.5 lb, while the adapted geometry offers significantly better lateral support in the shoulder area. Although the seat is now positioned a quarter of an inch lower and has a minimally thinner seat cushion, seating comfort has been improved overall.

In the area of digitization, the 911 takes the next step into the future with permanent connectivity, as well as new functions and services. The standard PCM features include online navigation based on swarm data as well as Porsche Connect Plus. 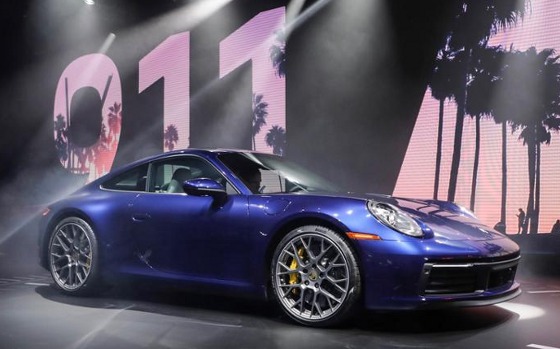 In a world first, Porsche has developed Wet mode, included as standard. This function detects water on the road, preconditions the control systems accordingly, and warns the driver; the driver can then adjust vehicle settings for a particular emphasis on safety at the push of a button, or by means of the mode switch on the steering wheel (optional Sport Chrono Package).

The camera-based warning and brake assist system, also fitted as standard, detects the risk of collisions with other vehicles, pedestrians, or cyclist and initiates a warning or emergency braking if necessary. Night Vision Assist with a thermal imaging camera is optionally available for the 911 for the first time. The adaptive cruise control option includes automatic distance control with stop-and-go function and reversible occupant protection. 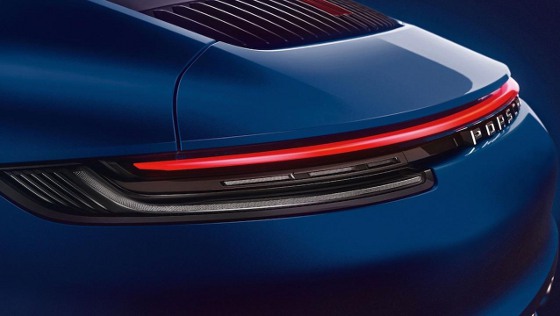 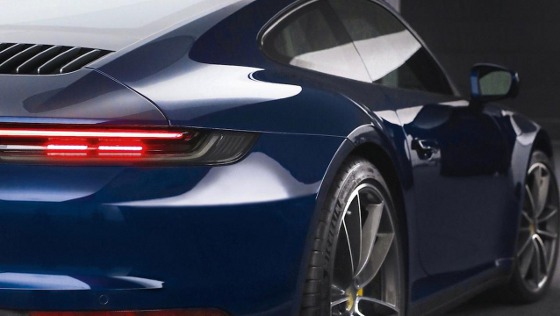 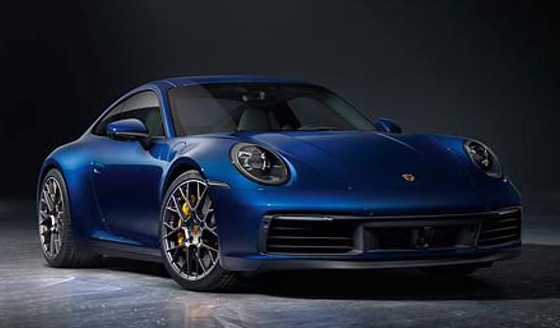