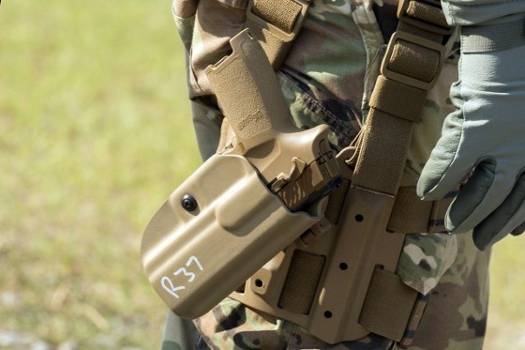 The Army began fielding the modernized M17 and M18 Modular Handgun Systems to the Military Police School in December 2018. The school is expected to received about 1,400 weapons in total. [Photo Credit: Lewis Perkins]

The U.S. Army began fielding M17 and M18 Modular Handgun Systems (the Army's versions of the Sig Sauer P320) to the Military Police School at Fort Leonard Wood in December to replace the force's aging Beretta M9, a weapon that has been in use since the mid-1980s and is quickly reaching its serviceability limits.

"The (Beretta M9s) we currently have are breaking more often, which causes readiness issues," Farley said. He explained that the school's M9s have fired on average about 20,000 to 30,000 rounds, when a typical handgun will last through only about 10,000 before they start to have significant issues.

Gary Homer, USAMPS instructor, added, "With these 17 and 18s, you won't get degradation of the barrel until after 25,000 rounds. The new MHS has an exponentially longer lifespan or life expectancy."

Homer said every MHS is test fired before leaving the factory with 13 rounds -- three to break in the weapon and 10 to test accuracy. He said each one must hit 10 out of 10 at 25 m in a smaller than 3-in. group, attesting to the gun's accuracy level. 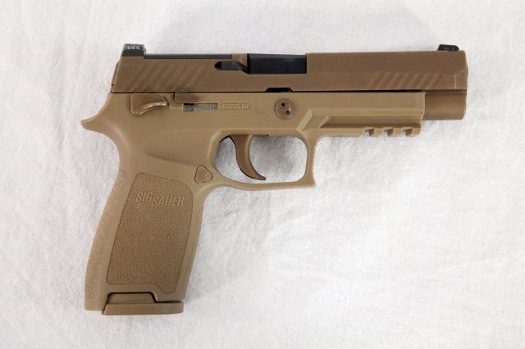 The Army's versions of the Sig Sauer P320, the XM17 and XM18, have different ammunition requirements than the commercial 320 pistol, and are painted a different color. The P320 was released for commercial use four years ago.

Both Farley and Homer agree one of the biggest selling points of the new MHS is the modular grips, which come in small, medium, and large that allow for the pistol to be modified to the individual shooter.

"The Military Police Corps is about 16 percent female Soldiers, so this is a big deal when you're talking about Soldier lethality and accuracy," Farley said. "For all Soldiers to be able to hold that weapon with a proper grip and use the right fundamentals of firing -- it's very important in order for them to be able to engage the target and thereafter. One size does not fit all."

In addition to being able to add lights to the guns with the rail system, John Scarbrough, USAMPS instructor/writer, said another thing he likes about the modernized weapons is the consistent trigger. He said this will help the MP students coming through the school's many courses.

He said the trigger pull in conjunction with the modular grips will improve overall accuracy.

"We have had students before who had to use two fingers to pull the trigger due to strength because of their hand position, or they're holding the gun in an awkward position, so it's not managing recoil," Scarbrough said. "Those are the two biggest things that I think will help out whomever is shooting them."

Farley agreed and said it's not just the equipment that's being modernized. He said USAMPS recently changed their qualification tables as well.

"It came at the right time where we were trying to make training a little more stringent and harder. This gun won't make it easier, but it will ease some of the transition on this new qualification table that is just now being exposed to Soldiers in the field," Farley said. "It wasn't coordinated, but it worked out well."

Farley said they are excited about the new gun, adding that it's long overdue. "The sooner we can get it fully fielded to the operational units and the full training base, then operational readiness will be enhanced." 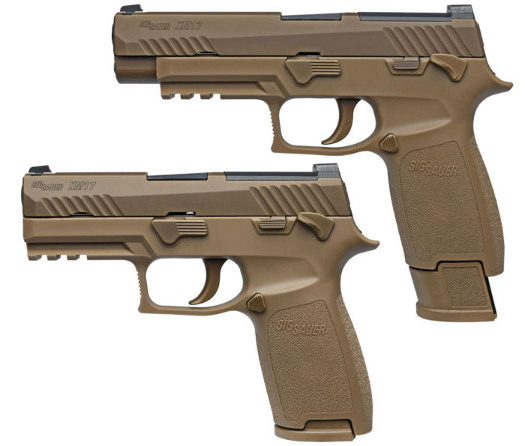 A lot of the weapon's accuracy can be attributed, in part, to ergonomics. [Image courtesy: SIG SAUER]

So far the school has only received a few hundred of these systems, but is expecting to receive approximately 1,400.

Editor's Note: SOFREP News has an interesting take on another reason the military chose this weapon: the ammo. Check it out here and decide for yourself.

When we ran a piece on the testing of this gun by the U.S. Army in 2017, Designfax reader RC added: "The XM18 is a subcompact version of the XM17. Both are still chambered in 9 mm and will be delivered in the desert tan color. However, purportedly the Army will also field the standard black color. The P320 is available in 9 mm, .357, and .40 and is only available in black."