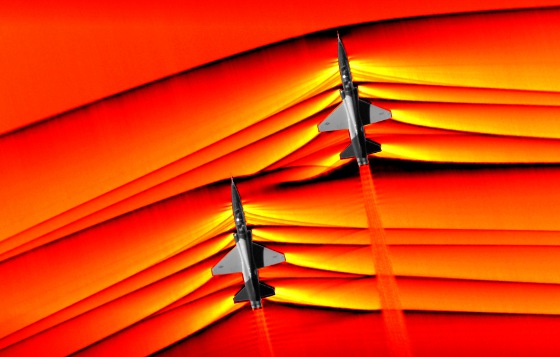 These two U.S. Air Force Test Pilot School T-38 aircraft are flying in formation, approximately 30 ft apart, at supersonic speeds, or faster than the speed of sound, producing shockwaves that are typically heard on the ground as a sonic boom. The images, originally monochromatic and shown here as colorized composite images, were captured during a supersonic flight series flown, in part, to better understand how shocks interact with aircraft plumes, as well as with each other. [Credits: NASA Photo]

"We never dreamt that it would be this clear, this beautiful."

Physical Scientist J.T. Heineck of NASA's Ames Research Center in Mountain View, CA, gets his first glimpse at a set of long-awaited images, and takes a moment to reflect on more than 10 years of technique development -- an effort that has led to a milestone for NASA's Aeronautics Research Mission Directorate.

NASA has successfully tested an advanced air-to-air photographic technology in flight, capturing the first-ever images of the interaction of shockwaves from two supersonic aircraft in flight.

"I am ecstatic about how these images turned out," says Heineck. "With this upgraded system, we have, by an order of magnitude, improved both the speed and quality of our imagery from previous research." 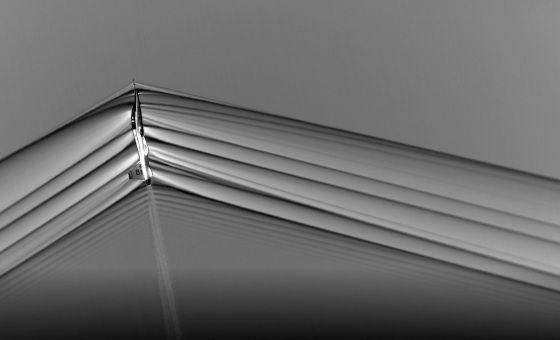 When aircraft fly faster than the speed of sound, shockwaves travel away from the vehicle and are heard on the ground as a sonic boom. NASA researchers use this imagery to study these shockwaves as part of the effort to make sonic booms quieter, which may open the future to possible supersonic flight over land. The updated camera system used in the AirBOS flight series enabled the supersonic T-38 to be photographed from much closer, approximately 2,000 ft away, resulting in a much clearer image compared to previous flight series. [Credits: NASA Photo]

The images were captured during the fourth phase of Air-to-Air Background Oriented Schlieren flights, or AirBOS, which took place at NASA's Armstrong Flight Research Center in Edwards, CA. The flight series saw successful testing of an upgraded imaging system capable of capturing high-quality images of shockwaves, rapid pressure changes which are produced when an aircraft flies faster than the speed of sound, or supersonic. Shockwaves produced by aircraft merge together as they travel through the atmosphere and are responsible for what is heard on the ground as a sonic boom.

The system will be used to capture data crucial to confirming the design of the agency's X-59 Quiet SuperSonic Technology X-plane, or X-59 QueSST, which will fly supersonic, but will produce shockwaves in such a way that, instead of a loud sonic boom, only a quiet rumble may be heard. The ability to fly supersonic without a sonic boom may one day result in lifting current restrictions on supersonic flight over land.

The core images feature a pair of T-38s from the U.S. Air Force Test Pilot School at Edwards Air Force Base, flying in formation at supersonic speeds. The T-38s are flying approximately 30 ft away from each other, with the trailing aircraft flying about 10 ft lower than the leading T-38. With exceptional clarity, the flow of the shock waves from both aircraft is seen, and for the first time, the interaction of the shocks can be seen in flight.

"We're looking at a supersonic flow, which is why we're getting these shockwaves," says Neal Smith, a research engineer with AerospaceComputing Inc. at NASA Ames' fluid mechanics laboratory.

"What's interesting is, if you look at the rear T-38, you see these shocks kind of interact in a curve," he says. "This is because the trailing T-38 is flying in the wake of the leading aircraft, so the shocks are going to be shaped differently. This data is really going to help us advance our understanding of how these shocks interact."

The study of how shockwaves interact with each other, as well as with the exhaust plume of an aircraft, has been a topic of interest among researchers. Previous, subscale schlieren research in Ames' wind tunnel revealed distortion of the shocks, leading to further efforts to expand this research to full-scale flight testing.

While the acquisition of these images for research marked one of the goals of AirBOS, one of the primary objectives was to flight test advanced equipment capable of high-quality air-to-air schlieren imagery to have ready for X-59's Low-Boom Flight Demonstration. That mission will use the X-59 to provide regulators with statistically valid data needed for potential regulation changes to enable quiet commercial supersonic flight over land.

While NASA has previously used the schlieren photography technique to study shockwaves, the AirBOS 4 flights featured an upgraded version of the previous airborne schlieren systems, allowing researchers to capture three times the amount of data in the same amount of time.

"We're seeing a level of physical detail here that I don't think anybody has ever seen before," says Dan Banks, senior research engineer at NASA Armstrong. "Just looking at the data for the first time, I think things worked out better than we'd imagined. This is a very big step."

Additional images included a "knife-edge" shot of a single T-38 in supersonic flight, as well as a slow-speed T-34 aircraft, to test the feasibility of visualizing an aircraft's wing and flap vortices using the AirBOS system. 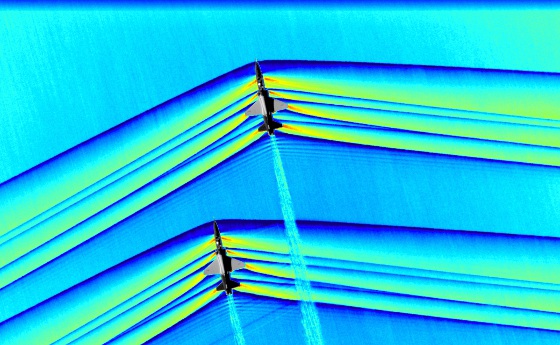 One of the greatest challenges of the flight series was timing. In order to acquire this image, originally monochromatic and shown here as a colorized composite image, NASA flew a B-200, outfitted with an updated imaging system, at around 30,000 ft while the pair of T-38s were required to not only remain in formation, but to fly at supersonic speeds at the precise moment they were directly beneath the B-200. The images were captured as a result of all three aircraft being in the exact right place at the exact right time. [Credits: NASA Photo]

The images were captured from a NASA B-200 King Air, using an upgraded camera system to increase image quality. The upgraded system included the addition of a camera able to capture data with a wider field of view. This improved spatial awareness allowed for more accurate positioning of the aircraft. The system also included a memory upgrade for the cameras, permitting researchers to increase the frame rate to 1,400 frames per sec, making it easier to capture a larger number of samples. Finally, the system received an upgraded connection to data storage computers, which allowed for a much higher rate of data download. This also contributed to the team being able to capture more data per pass, boosting the quality of the images.

In addition to a recent avionics upgrade for the King Air, which improved the ability of the aircraft to be in the exact right place at the exact right time, the team also developed a new installation system for the cameras, drastically reducing the time it took to integrate them with the aircraft.

"With previous iterations of AirBOS, it took up to a week or more to integrate the camera system onto the aircraft and get it working. This time we were able to get it in and functioning within a day," says Tiffany Titus, flight operations engineer. "That's time the research team can use to go out and fly, and get that data."

While the updated camera system and avionics upgrade on the B-200 greatly improved the ability to conduct these flights more efficiently than in previous series, obtaining the images still required a great deal of skill and coordination from engineers, mission controllers, and pilots from both NASA and Edwards' U.S. Air Force Test Pilot School. 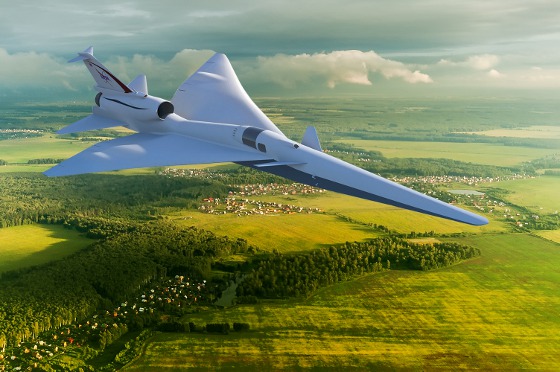 The X-59 Quiet SuperSonic Technology X-plane, or QueSST, will test its quiet supersonic technologies by flying over communities in the United States. X-59 is designed so that when flying supersonic, people on the ground will hear nothing more than a quiet sonic thump -- if anything at all. The scientifically valid data gathered from these community overflights will be presented to U.S. and international regulators. [Credits: NASA Image]

In order to capture these images, the King Air, flying a pattern around 30,000 ft, had to arrive in a precise position as the pair of T-38s passed at supersonic speeds approximately 2,000 ft below. Meanwhile, the cameras, able to record for a total of 3 sec, had to begin recording at the exact moment the supersonic T-38s came into frame.

"The biggest challenge was trying to get the timing correct to make sure we could get these images," says Heather Maliska, AirBOS sub-project manager. "I'm absolutely happy with how the team was able to pull this off. Our operations team has done this type of maneuver before. They know how to get the maneuver lined up, and our NASA pilots and the Air Force pilots did a great job being where they needed to be. ... They were rock stars."

The data from the AirBOS flights will continue to undergo analysis, helping NASA refine the techniques for these tests to improve data further, with future flights potentially taking place at higher altitudes. These efforts will help advance knowledge of the characteristics of shockwaves as NASA progresses toward quiet supersonic research flights with the X-59, and closer toward a major milestone in aviation.

AirBOS was flown as a sub-project under NASA's Commercial Supersonic Technology project.