Q. I need speed and accuracy over a long length. What type of actuator should I use?

A. That's a smart question to ask; many design engineers overestimate how accurate traditional motors and actuators stay over long travel runs, mistakenly believing that if the solution works well for short runs, it will work equally well on long ones.

Although many types of linear systems can meet two of your three requirements (long travel lengths, high speed, and high positioning accuracy), linear motor actuators are the only type that can provide all three without compromise. They are often used in semiconductor manufacturing, consumer electronics inspection, medical and life science applications, machine tools, printing, and packaging applications.

To provide a little background, let's define linear motors. Essentially, a linear motor is a rotary motor that has been unwound and laid out flat. It allows coupling the motor directly to the linear load; in contrast, other designs use a rotary motor and couple through mechanics, which can introduce backlash, efficiency losses, and other inaccuracies. Linear motors tend to have higher maximum velocities compared to ball screws of the same travel length as well.

Three main types of linear motors are used in today's marketplace. Depending on the specific application, a wide range of solutions are available in any of these three motor types.

The first is ironcore, which has coils wound around teeth made of ferrous material, wrapped in laminate. These motors have the highest force per size, good heat transfer, and are generally the least expensive. 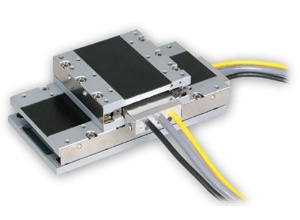 Ironcore linear motor stages like the MX80L miniaturized actuator from Parker combine a high level of force with a small footprint and highly precise movement thanks to a patented anti-cogging design.

However, the iron in the motor leads to increased cogging (torque due to interactions of the magnets in the motor), so they are often somewhat less precise than the second type, ironless linear motors.

As the name implies, an ironless linear motor doesn't have any iron inside. The forcer is essentially a plate made of epoxy in which the tightly wounded copper coils are inserted. The forcer slides in between a double row of magnets that face each other. The magnets are linked on one side by a spacer. This is also known as a U-channel magnetic way. 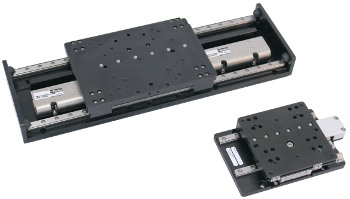 The main advantage of ironless motors is a reduction in attractive forces and the elimination of cogging that the iron in a motor would normally cause. This makes them more precise than the ironcore. However, the two rows of magnets make ironless units more expensive than the ironcore. Managing heat transfer can also be difficult, so it's important to understand early whether a particular application will run the risk of overheating. The newest ironless motor design features coils that are overlapped, providing more surface contact for heat dissipation. This design also allows the motor to have a higher force density.

The third and final type is a slotless linear motor, which is basically a hybrid of the first two types. 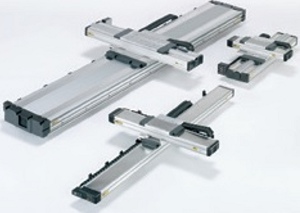 A slotless motor has a single row of magnets like the ironcore, which helps keep its price lower. A laminated backiron ensures good heat transfer, as well as lower attractive forces and cogging than an ironcore motor. Slotless motors also offer the advantage of a lower height profile than ironless and a lower price. For designers who prioritize keeping the components within their machines as small as possible, every millimeter of space saved can be crucial.

Q. How can I know if a given actuator is suitable for use in a specific environment?

A. All too often, design engineers choose actuators in isolation, without sufficient consideration for where they will have to "live." Linear actuators have critical moving parts that will only work properly within the environment for which they were designed and manufactured. Using an inappropriate linear actuator can cause issues ranging from improper operation to irreparable damage to the actuator itself. For "dirty" applications, such as a cutting tool that produces particles or scrap, the actuator will require sealing and shielding to protect it from contaminants.

From the opposite perspective, an actuator without the proper rating can introduce contamination into a clean environment, compromising the application. Normal wear and tear will cause linear stages to produce particulates over time. Cleanroom or in-vacuum environments often require the use of equipment that releases zero particulates, so it is critical that the actuators used in these environments are equipped with seals and shields to stop particulates from entering the environment.

Some linear mechanics, such as in semiconductor processing applications, are moving only microns at a time, so even the least amount of contamination can compromise and ruin an application. Seals and shields can protect critical components from exposure to harsh environments, allowing the linear actuator to run as it was designed to perform. For clean environments, the seals and shields are designed to protect the application's environment from possible contaminants produced by the actuator, not the actuator itself. In addition to seals and shields, custom linear actuators can be designed with positive pressure ports that allow purging unwanted contaminants inside the unit, keeping the performance and life cycle at a maximum. 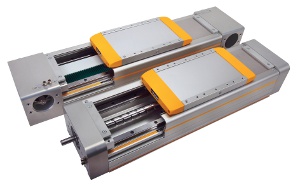 HMR Series heavy-duty, low-proï¬le high-moment rodless linear actuators can be configured with IP54 protective covers that completely wrap the outside of the chassis; seal strip technology protects the internal components from contamination.

A variety of environmental factors must be considered when choosing a linear actuator for an application. These include the ambient temperature, the presence of moisture, exposure to gases other than room air or other chemicals, radiation, the level of air pressure (for applications that are performed in vacuum), cleanliness, and other nearby equipment. For example, is there another piece of equipment in the vicinity that could transfer vibrations that would affect the performance of the linear stage?

A linear stage's Ingress Protection (IP) rating, which is typically provided in its specifications, indicates whether it has the proper protection from its environment. IP ratings are defined levels of sealing effectiveness of enclosures against intrusion from foreign bodies (dust, dirt, etc.) and moisture. An enclosure rating takes the form of "IP-" followed by two digits. The first digit indicates the degree of personal protection from moving parts and the level of protection from foreign bodies. The second digit identifies the level of protection against exposure to moisture (drips, sprays, submersion, etc.). 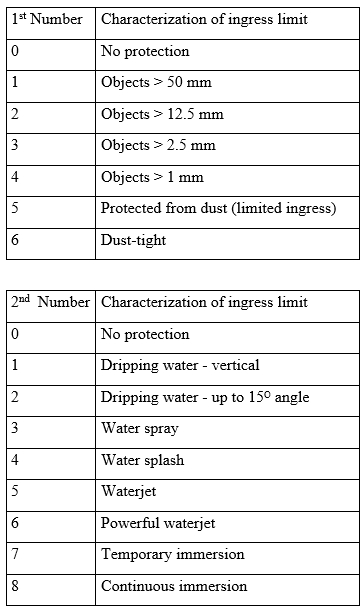 More information on IP ratings can be found in the ANSI/IEC 60529-2004 standard.