Just out! Most powerful Raspberry Pi ever made

The new Raspberry Pi 4 Model B Computer is the most powerful Raspberry Pi model ever made. It offers significant enhancements in processor speed, multimedia performance, memory, and connectivity that will make it attractive to general desktop computer users, hobbyist and makers, and professional developers working with compute-intensive embedded applications such as computer vision and Artificial Intelligence (AI). 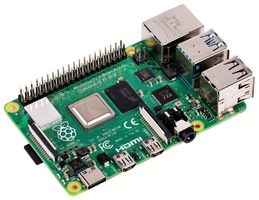 The Raspberry Pi Foundation in the UK, the developer of the low-cost, credit card-sized computer, has sold more than 22 million units since Raspberry Pi's introduction in 2012. The devices were originally intended to teach the basics of computer science in schools and developing countries. Raspberry Pi has seen several new-model and sub-model introductions throughout the years, each with expanded capabilities and features. There is also a wide array of add-ons for the basic board setup. Businesses all over the world are also integrating Raspberry Pi units in real-world products, because they have easy programming and are available so cheaply -- often under $35.

Newark is the largest manufacturer and distributor of the Raspberry Pi, and has championed its use with both professional design engineers and makers through the element14 community.

"The extra power and range of memory options support the needs of professional design engineers," said Raspberry Pi Trading Chief Executive Eben Upton. "AI and machine learning data can be processed right on the board, reducing the need to send data to the cloud and addressing real-world concerns about privacy. And of course, Raspberry Pi 4 Model B can be used as a desktop computer, with a powerful processor, multimedia acceleration, and dual-display support."

"Makers can supercharge their projects with greater processing power and several memory options, alongside the same usability and support they are familiar with from earlier versions," added Upton. "It's the best Raspberry Pi Computer we've ever made, and we are excited to build upon our strong relationship with Newark with this launch."

The Raspberry Pi 4 Model B Computer is the first model to use a 28-nm SoC, delivering a significant increase in performance and energy efficiency.

"As a desktop computer, the Raspberry Pi 4 Model B Computer provides performance comparable to entry-level x86 PC systems, with an exceptional video and multimedia experience, and is capable of quickly downloading and running 3D games," said Hari Kalyanaraman, Global Head of Single Board Computers at Newark. Users can purchase the entry-level 1-GB model for $35, but will see improved performance in memory-intensive applications such as web browsing from the $45 2-GB and $55 4-GB models."

The Raspberry Pi 4 Model B Computer will remain in production until at least January 2026. Also available alongside the Raspberry Pi 4 Computer is a brand-new case and a range of accessories including power supplies and micro HDMI cables.

The Raspberry Pi 4 Computer is available now from Newark in North America.

Here is the URL in full: https://www.newark.com/buy-raspberry-pi?ICID=HP-LB-Raspberry-Pi-4-Launch-Find-Out-More.

Initial quantities may already be sold out, so also check the other Raspberry PI approved U.S. distributors, including:

*Important Note: Please make sure to read any seller website notes about essential Raspberry Pi accessories. You will probably need a power supply, for example, for the basic board, so your costs will increase. Also, these models are probably available from unapproved resellers on eBay and the like. You will pay more from them -- often much more.

Let Designfax know what you do with it!