NVision helps get bird-damaged 737 back in the skies fast 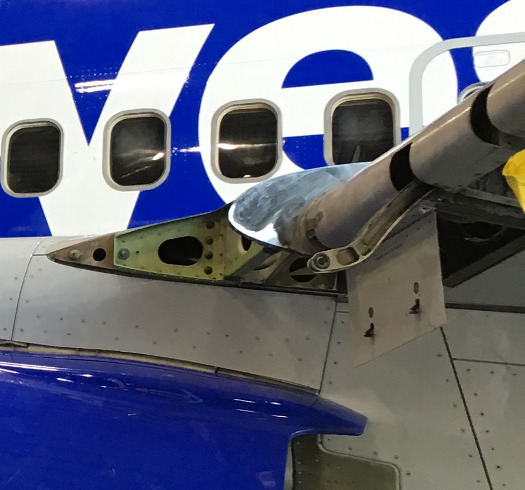 Birds and planes can be an expensive and disruptive mix, costing airlines worldwide billions of dollars in damages each year. Bird strikes in 2017 cost the civil aviation industry at least 71,253 hours of aircraft downtime, and the FAA estimates that $400 million in damages annually can be attributed to bird strikes in the United States alone. Despite various preventative measures aimed at reducing the number of strikes, it is clearly a problem that will continue to cause considerable trouble for airlines; FAA data shows that U.S.-based civilian flights reported 14,661 bird strikes in 2018 -- or more than 40 a day. 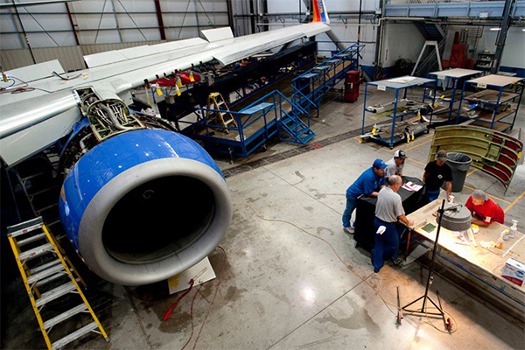 In this case, the airline, a low-cost domestic carrier, had suffered damage to one of its 737's wing ribs, requiring the aircraft to be grounded until repairs were made. Wing ribs are an essential part of a plane's wing assembly. Attached to the spar, the main spanwise beam of an airplane wing, ribs form the "skeleton" of a wing's structure, giving it its airfoil shape, which helps distribute aerodynamic forces over a larger surface area and makes lift possible.

Familiar with NVision's aerospace work, the carrier sought the company's help. "We have an extensive client base in commercial and military aviation," says Steve Kersen, president of NVision. "Our clients include Bombardier, Delta, American, Southwest, and Lockheed Martin to name a few, so we understand the urgency of an Aircraft on Ground, or AOG, situation. In addition to removing, repairing, and restoring the damaged component, the airline also bears the cost of flight delays, cancellations, and missed connections. The immense expense incurred by grounding the aircraft made restoring it to flight worthiness an immediate and top priority."

NVision technicians traveled to the airline's facilities and scanned the damaged wing rib using the company's HandHeld laser scanner, collecting all the necessary data on the rib's exact geometry; its shape, size, and contours. 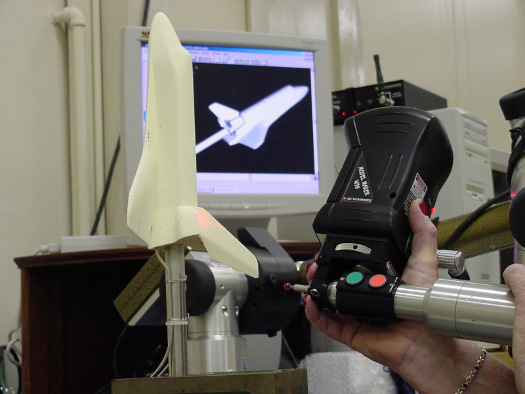 The NVision Handheld scanner is used for projects large and small. It can be attached to a mechanical arm that moves about the object, freeing the user to capture data rapidly and with a high degree of resolution. An optional tripod provides complete portability in the field.

The NVision Handheld scanner is a powerful portable scanning device that is capable of capturing 3D geometry from objects of almost any size or shape. The scanner is attached to a mechanical arm that moves about the object, freeing the user to capture data rapidly with a high degree of resolution and accuracy. As a part is inspected, the scanner generates a point cloud consisting of millions points each with x, y, z coordinates and i, j, k vectors. Integrated software that comes with the scanner is used to convert the point cloud to an STL polygon, and an optional tripod provides complete portability in the field. Intuitive software allows real-time rendering, full model editing, polygon reduction, and data output to all standard 3D packages. 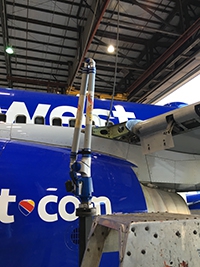 After converting the rib's point cloud to an STL file, NVision technicians imported the file into specialized modeling software, where CAD engineers processed the data to an IGES/STEP model. Design engineers then created an insert to strengthen the rib and electronically transferred the manufacturable CAD model to the airline, where it was rapidly machined and installed, enabling the damaged plane to fly again just 48 hours after the strike.

In other airline MRO work, NVision's optical scanning helped a certified FAA repair station document its work on a passenger jet part with such precision that the station was able to obtain the necessary FAA approval for the repair in much less time than is usually required.

The station needed to remove corrosion from the part in order to make necessary repairs prior to reassembling the system. Knowing they would need to submit a report for FAA approval showing exactly how much metal was removed in the corroded areas, the station brought the part to NVision. Using the HandHeld Scanner, NVision technicians took about half a day to scan the part before corrosion was removed and another half day to scan it after the removal of the defects. NVision then created an inspection report, with color deviation chart, precisely documenting the exact amount and location of any corrosion and associated metal that had been removed from the part. The report was reviewed and approved by the FAA.

"We're doing more aerospace work than ever before," says Kersen. "Currently, we're seeing several projects each month. And it just continues to grow. The applications for non-contact optical scanning and measurement in aircraft design and MRO [maintenance, repair, and overhaul] are truly limitless, and the airline industry is moving fast to take advantage of this powerful technology."

NVision provides both services for Reverse Engineering and Inspection and equipment sales.