55 Years Ago: First flight of the Lunar Landing Research Vehicle 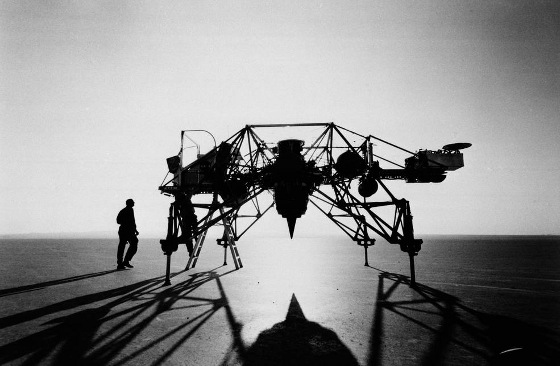 The first LLRV silhouetted against the rising sun on the dry lake bed at Edwards AFB.

On May 25, 1961, President John F. Kennedy committed the United States to landing a man on the Moon and returning him safely to the Earth before the end of the decade. Achieving that goal posed multiple challenges, among them how to train astronauts to land on the Moon, a place with no atmosphere and one-sixth the gravity on Earth.

At the time of the proposal, NASA had not yet chosen the method for getting to and landing on the Moon, but once NASA decided on Lunar Orbit Rendezvous, the Lunar Module's (LM) flying characteristics matched Bell's proposed design closely enough that the LLRV served as an excellent trainer. 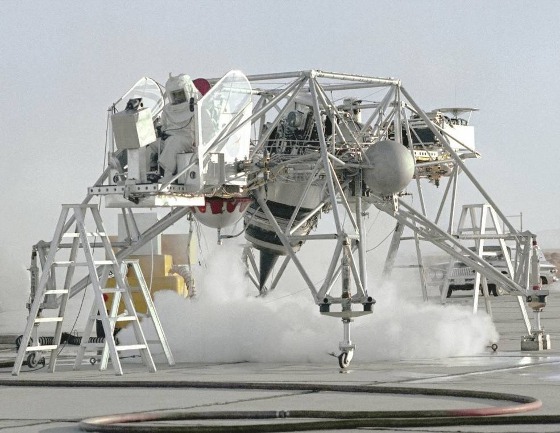 LLRV-1 during an engine test at FRC.

Bell Aerosystems delivered the LLRV-1 to FRC on April 8, 1964, where it made history as the first pure fly-by-wire aircraft to fly in Earth's atmosphere. Its design relied exclusively on an interface with three analog computers to convert the pilot's movements to signals transmitted by wire and to execute his commands. 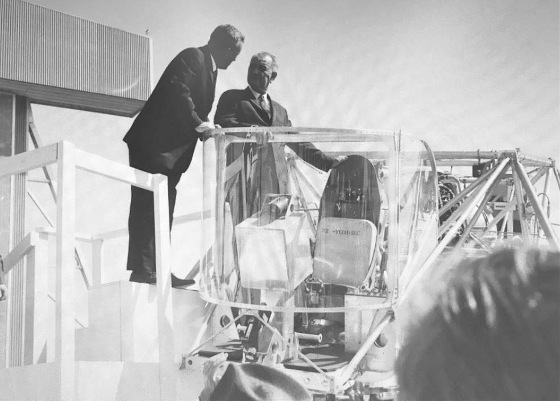 Walker demonstrating the features of LLRV-1 to President Johnson during his visit to FRC.

The open-framed LLRV used a downward-pointing turbofan engine to counteract five-sixths of the vehicle's weight to simulate lunar gravity, two rockets provided thrust for the descent and horizontal translation, and 16 LM-like thrusters provided three-axis attitude control. The astronauts were thus able to simulate maneuvering and landing on the lunar surface while still on Earth. The LLRV pilot could use an aircraft-style ejection seat to escape from the vehicle in case of loss of control.

Engineers conducted numerous tests to prepare the LLRV for its first flight. During one of the engine tests, the thrust generated was higher than anticipated, lifting crew chief Raymond White and the LLRV about a foot off the ground before White could shut off the engines. On June 19, during an official visit to FRC, President Lyndon B. Johnson inspected the LLRV featured in a static display. The Secret Service would not allow the President to sit in the LLRV's cockpit out of an overabundance of caution since the pyrotechnics were installed, but not yet armed, in the ejection seat. Following a Preflight Readiness Review held Aug. 13 and 14, managers cleared the LLRV for its first flight.

In the early morning of Oct. 30, 1964, FRC chief pilot Joseph A. "Joe" Walker arrived at Edwards Air Force Base's (AFB) South Base to attempt the first flight of the LLRV. Walker, a winner of both the Collier Trophy and the Harmon International Trophy, had flown nearly all experimental aircraft at Edwards including 25 flights in the X-15 rocket plane. On two of his X-15 flights, Walker earned astronaut wings by flying higher than 62 miles, the unofficial boundary between the Earth's atmosphere and space.

After strapping into the LLRV's ejection seat, Walker ran through the preflight checklist before advancing the throttle to begin the first flight. The vehicle rose 10 feet in the air, Walker performed a few small maneuvers and then made a soft landing after having flown for 56 seconds. He lifted off again, performed some more maneuvers, and landed again after another 56 seconds. On his third flight, the vehicle's electronics shifted into back-up mode and he landed the craft after only 29 seconds. Walker seemed satisfied with how the LLRV handled on its first flight. 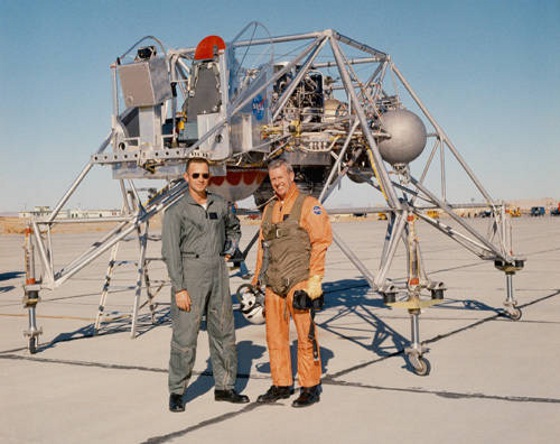 Workers at FRC assembled the second vehicle, LLRV-2, during the latter half of 1966. In December 1966, after 198 flights, workers transferred LLRV-1 to Ellington to be more convenient for astronaut training, and LLRV-2 followed in January 1967 after completing six test flights at FRC. The second LLRV made no further flights, partly because the three Lunar Landing Training Vehicles (LLTVs), more advanced models that better simulated the LM's flying characteristics, began to arrive at Ellington in October 1967. 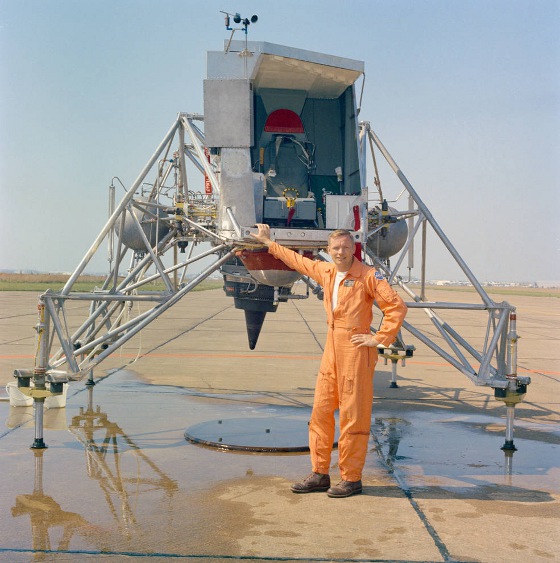 Armstrong with LLRV-1 at Ellington AFB in 1967.

Neil A. Armstrong completed the first astronaut flights aboard LLRV-1 on Mar. 23, 1967, and flew 21 flights before ejecting from the vehicle on May 6, 1968, seconds before it crashed. He later completed his lunar landing certification flights using LLTV-2 in June 1969, just three weeks before the historic Moon landing mission.

All Apollo Moon landing mission commanders and their backups completed their lunar landing certifications using the LLTV, with Apollo 17 Commander Eugene A. Cernan making the final flight on Nov. 13, 1972. 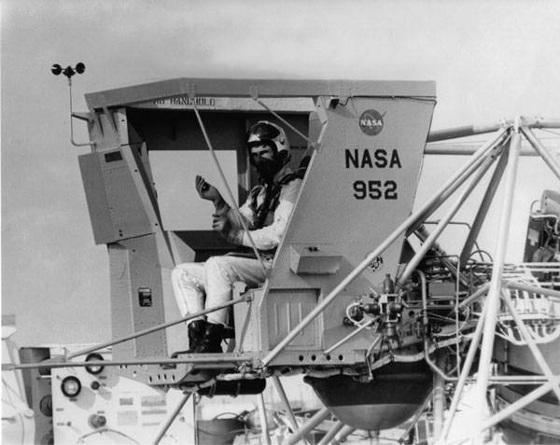 Cernan preparing for a flight aboard LLTV-3.

Apollo 11 Commander Neil Armstrong said of the LLTV: "All the pilots ... thought it was an extremely important part of their preparation for the lunar landing attempt," adding, "It was a contrary machine, and a risky machine, but a very useful one." 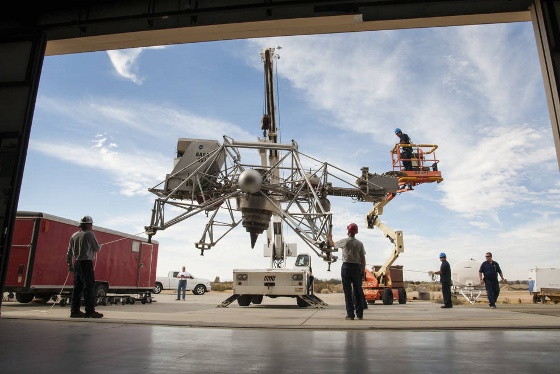 LLRV-2 being moved from Armstrong Flight Research Center for display at the Air Force Test Flight Museum at Edwards AFB. 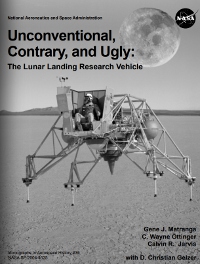 In addition to playing a critical role in the Moon landing program, these early research and test vehicles aided in the development of digital fly-by-wire technology for future aircraft. LLRV-2 is on display at the Air Force Flight Test Museum at Edwards AFB (on loan from Armstrong Flight Research Center).

Editor's Note: If you would like to dive deeper into the details of the Lunar Landing Research Vehicle's development, download and read the excellent, free NASA e-book (PDF format) "Unconventional, Contrary, and Ugly -- The Lunar Landing Research Vehicle." With a forward by Neil Armstrong, this 2005 work digs into development, flight research, and training, providing 242 pages of inside-scoop goodness for interested readers.