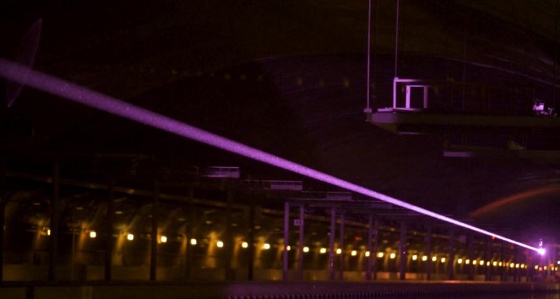 Captured by a special camera, a laser beam invisible to the naked eye shoots across the dark expanse of the David Taylor Model Basin at the Naval Surface Warfare Center in Bethesda, MD. [Image courtesy: USNRL]

It was the second day of a three-day-long tech demonstration at the David Taylor Model Basin at the Naval Surface Warfare Center in Bethesda, MD, where attendees had gathered to stand around in the dark to look at something they mostly couldn't see.

It was a long-range, free-space power beaming system -- the first of its kind. Attendees that day, May 23, could see the system itself -- the two 13-ft-high towers, one a 2-kW laser transmitter, the other a receiver of specially designed photovoltaics. But the important part, the laser that was beaming 400 W of power across 325 m, from the transmitter to the receiver, was invisible to the naked eye.

On one end of the of the testing facility -- one of the largest test facilities for model ships in the world -- the receiver was converting the laser energy to DC power, which an inverter was turning into AC power to run lights, several laptops, and a coffeemaker that the organizers were using to make coffee for the attendees, or "laser lattes."

As more than one person there had noted, it wasn't exactly an exciting scene. But when you're transmitting hundreds of watts of power with a laser beam, "exciting" is not what you're aiming for. You want it quiet, boring, and, most importantly, safe.

And so it was.

"Power beaming, the concept, has been around for decades, and there've been laboratory demonstrations, but this is really a first and a new technology that's getting fielded," explained Tom Nugent, chief technology officer of PowerLight Technologies, the hardware provider for the Power Transmitted Over Laser (PTROL) project.

The culmination of the PTROL project's second phase, the demonstration was two years in the making for PowerLight and Paul Jaffe, an electronics engineer with the U.S. Naval Research Laboratory. During a briefing that preceded the demo, Jaffe had described that day's demonstration as historic.

Early power beaming demonstrations took place in 1975, the first in Waltham, MA, in the laboratories of Raytheon, and the second at the Goldstone Station of the NASA Deep Space Network in California. Those were the two most important such demonstrations in history, Jaffe told his audience.

"The third one, you're going to see in a few minutes," he said. 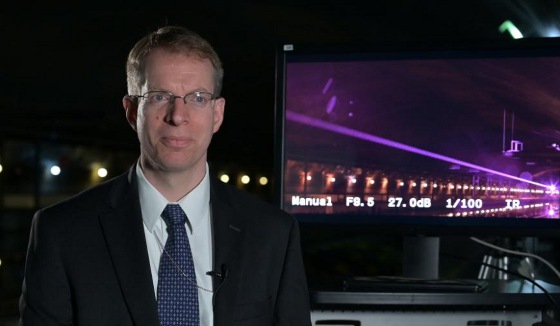 At NRL, Jaffe has been conducting space-based solar energy research for more than a decade, focusing in part on transmitting solar energy from space to Earth. One of the biggest challenges he and others working on the problem have faced is the enormous sizes required for the transmitter and the receiver.

"Radio waves have a fairly long wavelength, and in order to steer them effectively ... you need a really big antenna," he explained. "But as the wavelength gets shorter, as it does for infrared light, which is what we're using here today, the transmitter and receiver can be much, much smaller."

The photovoltaics of the receiver are similar to those of a typical solar panel, Jaffe said, though they are designed to be sensitive to the single color of light of the laser, rather than the broad spectrum of sunlight. They convert that particular wavelength with much greater efficiency than would a regular solar photovoltaic.

Standing beside a monitor showing a live feed from an expensive, highly specialized camera that captured the invisible laser beam as a purple light shooting across the dark expanse of the basin, Jaffe called the power beaming system a remarkable new capability. He said it could unlock all kinds of amazing possibilities for the Department of Defense and the private sector.

Imagine using it to send power to locations that are remote, hard to reach, or lack infrastructure, he suggested. Another potential application of the technology would be powering electric unmanned aerial vehicles (UAVs), whose flight time is currently severely limited by their on-board battery life. The third phase of the PTROL project will involve using power beaming to send power to a flying UAV.

"If you have an electric drone that can fly more than an hour, you're doing pretty well," Jaffe said. "If we had a way to keep those drones and UAVs flying indefinitely, that would have really far-reaching implications. With power beaming, we have a path toward being able to do that."

Also present for the demonstration was Eric Follstad with Transformation and Concept Development at U.S. Central Command. He compared the proposed UAV power beaming capability to air-to-air refueling for manned aircraft.

"I think this is just a logical extension of [that] concept," Follstad said. "Now we can do ground-to-air recharging of some of these electric platforms that we've been flying." 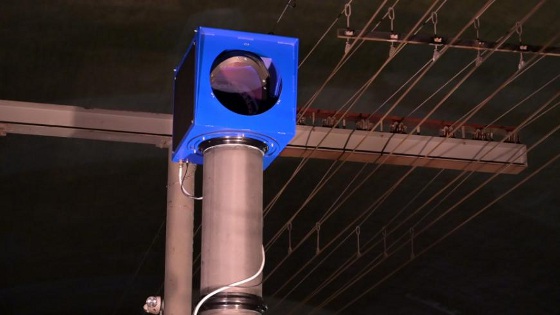 According to Jaffe, power beaming could also make possible the transmission of power from solar energy-collecting satellites in space to the ground, wherever it's needed -- whether that's a forward operating base, a developing country, or a refugee camp. (The power for the demonstration that day was coming from an electrical outlet in the building.)

"If we could capture the boundless sunlight in space, where it's brighter than anywhere on Earth, [we could] send it to places that are difficult and expensive to get energy to today," he said. "If we can do that in an effective way and do for energy what GPS has done for navigation, it would truly be revolutionary."

The most notable aspect of the demonstration, however -- according to Jaffe and Nugent -- was the technology's integrated safety systems. No one in the test facility that day was wearing laser safety goggles or any other kind of safety gear, including the personnel operating the system. To put that in perspective, a typical laser of just 1/2 W requires protective eyewear.

Nearly all power beaming demonstrations in the past have involved at least the risk of exposure to hazardous power densities, whether optical or radio or microwave frequencies. The safety of this new system was validated by the Lead Naval Technical Laboratory for Laser Safety (LNTL-LS).

"In this one, the safety systems make it effectively impossible for anyone to be exposed to hazardous levels of energy," Jaffe said. 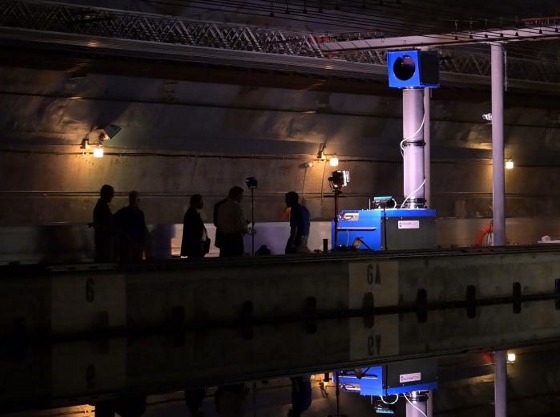 A handful of attendees at the Power Transmitted Over Laser (PTROL) project demonstration stand near the system's 2-kW laser transmitter. [Photo: Leonard Pieton]

Among the challenges the designers have had to grapple with are the effects of snow, rain, and other weather phenomena interfering with the laser beam. But the designers have also given a lot of thought to the prospect of humans or animals crossing through the beam and inadvertently getting a "face full of laser," as Nugent put it.

To prevent such accidents, the safety system is designed to detect objects before they ever reach the laser beam, and turn it off.

Standing by the tall receiver was TJ Sayles, a senior technology developer who leads product development efforts for PowerLight Technologies. He was holding a long rod, on the end of which was affixed a 15-mm-diameter cardboard disk with one side painted white and the other painted black. Sayles called the disk a "foreign object analogue."

To demonstrate the safety system for the crowd, Sayles would trip it by waving the disk in front of photovoltaics of the receiver. Each time he did so, the laser beam would cut off, a fact attendees could confirm by watching the infrared live feed on the nearby monitor.

"We're detecting foreign objects as they approach the beam, and we're turning off the beam before they can enter it, and we're checking that the beam path is clear before we turn it back on," Sayles explained. "The auto restart routine takes a few seconds."

In the future, PowerLight intends to increase the wattage the laser beam can transmit, increase the distance the system can send it, and improve the system's overall efficiency. Nugent said he wants the process of operating it to be as simple as flipping a light switch or plugging in an extension cord.

The system has received support and endorsements from the Navy, Marines, Army, and Air Force. It's expected to be ready to make the transition to Department of Defense and commercial use in the near future.

Editor's Note: U.S. Navy researchers told Designfax exclusively that the overall efficiency of the demonstrated system was less than 30 percent -- but that, of course, is something to work on.