Autonomous and semi-autonomous systems need active illumination to navigate at night or underground. Switching on visible headlights or some other emitting system like lidar, however, has a significant drawback: It allows adversaries to detect a vehicle's presence -- in some cases from long distances away.

To eliminate this vulnerability, DARPA recently announced the Invisible Headlights program. The fundamental research effort seeks to discover and quantify information contained in ambient thermal emissions in a wide variety of environments and to create new passive 3D sensors and algorithms to exploit that information.

"We're aiming to make completely passive navigation in pitch dark conditions possible," said Joe Altepeter, program manager in DARPA's Defense Sciences Office. "In the depths of a cave or in the dark of a moonless, starless night with dense fog, current autonomous systems can't make sense of the environment without radiating some signal -- whether it's a laser pulse, radar, or visible light beam -- all of which we want to avoid. If it involves emitting a signal, it's not invisible for the sake of this program." 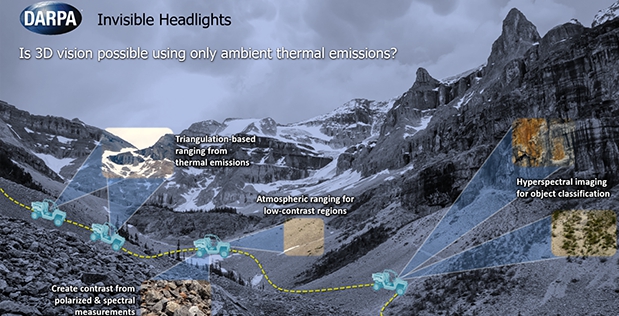 Since everything, animate and inanimate, gives off some thermal energy, the goal is to discover what information can be captured from even an extremely small amount of thermal radiation and then to develop novel algorithms and passive sensors to transform that information into a 3D scene for navigation.

"If we're successful, the capability of Invisible Headlights could extend the environments and types of missions in which autonomous assets can operate -- at night, underground, in the arctic, and in fog," Altepeter said. "The fundamental understanding of what information is available in ambient thermal emissions could lead to advances in other areas, such as chemical sensing, multispectral vision systems, and other applications that exploit infrared light."