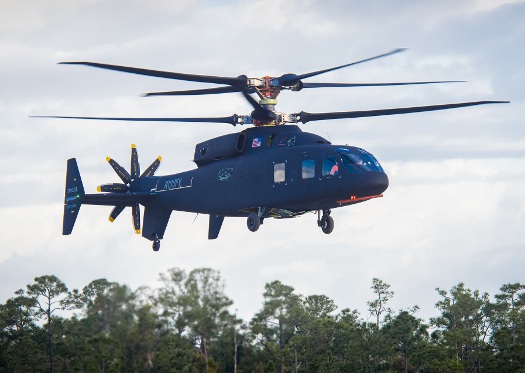 On a recent flight test, Sikorsky-Boeing's new SB-1 Defiant attack and assault helicopter demonstrator proved it was faster than the long-in-service Black Hawk by reaching 205 knots (236 mph) -- and Defiant is designed to go much faster. The new medium-lift, compound coaxial copter completed its first flight back in March 2019. The Black Hawk's top speed is 193 knots (222 mph).

Sikorsky Chief Test Pilot Bill Fell said this milestone is just the beginning and the SB-1 has "got a lot more in it."

With its two coaxial main rotors and rear-mounted, all-electric pusher propulsor, the single-engine Defiant is unlike production rotorcraft available today. It represents what its designers think is a leap forward in technology to achieve the U.S. government's desire for vast increases in speed and range, while improving maneuverability and survivability in a cost-effective way.

"Defiant is designed to fly at nearly twice the speed and has twice the range of conventional helicopters while retaining the very best, if not better low-speed and hover performance of conventional helicopters," said Dan Spoor, vice president, Sikorsky Future Vertical Lift. "This design provides for exceptional performance in the objective area, where potential enemy activity places a premium on maneuverability, survivability, and flexibility." 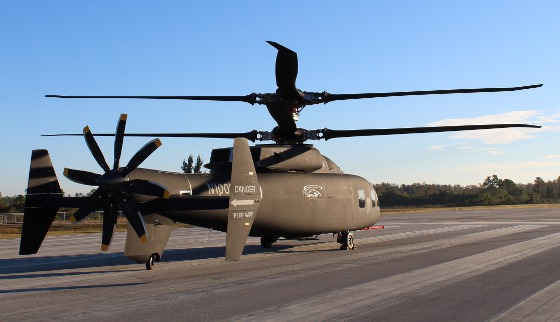 The U.S. Army has a stated goal to replace the UH-60 Black Hawk helicopter in fiscal year 2030. The SB-1 Defiant is one of two designs being considered as replacements in the Future Long-Range Assault Aircraft (FLRAA) program as part of the Army's Future Vertical Lift (FVL) initiative, the Army's No. 3 modernization priority area.

The winning design will be required to blend airplane-like speeds with helicopter-like maneuverability. The aircraft will need to maintain 100 percent maximum continuous power, medical evacuation capabilities, and (per guidelines) have the ability to perform a 500-ft-per-min. vertical rate of climb. It will have to soar at 6,000 ft in 95-degree heat, with up to 12 passengers and for roughly 1,725 nautical miles one way without refueling. The program's objective cruise speed is 280 knots, or roughly 320 mph.

Bell Textron's part-aircraft, part-helicopter design called the Bell V-280 Valor is the other contender. So far, Valor, which sports two transformational tiltrotors, has flown at speeds around 200 knots (230 mph) in testing. It includes a fly-by-wire flight control system. 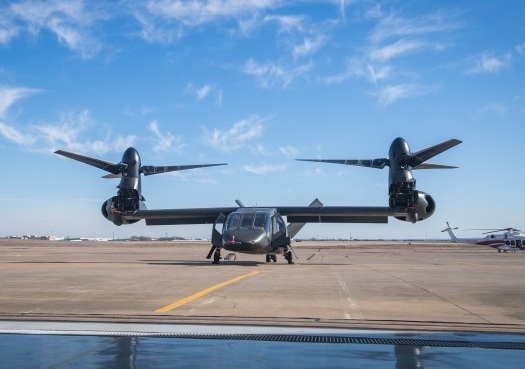 Both helicopters are participating in the Army's Joint Multi-Role-Medium Technology Demonstrator program. Neither one of the current demonstrator vehicles is considered the ultimate final design, should it be chosen.

The Sikorsky-Boeing SB-1 Defiant is counting on its X2 Technology (counter-rotating blade) design to make it the U.S. Army's top choice due to its scalability to a variety of military missions such as attack and assault, long-range transportation, infiltration, and resupply. X2 was first developed on Sikorsky's two-seater XH-59A prototype, which made significant improvements in vibration reduction, weight reduction, and blade technology. It boasts improved hover performance, rapid maneuverability, and crisp control response due to the rigid rotor -- all while maintaining helicopter-like performance at low speeds.

The SB-1 Defiant can hold a crew of four. It has fly-by-wire flight controls, manually foldable blades to reduce space requirements during parking, a composite fuselage, and retractable landing gear.

According to a Feb. 26, 2020, article on Business Insider by Matthew Cox of Military.com, "Test pilots on Defiant said they love the [electric] rear pusher prop, which is designed to provide revolutionary thrust, but are also comforted that it can take direct hits in combat without causing catastrophic failure to the aircraft."

The article also says, "The pusher prop can also be reversed very quickly to provide negative thrust for quick braking power, and then turned off for a quieter sound signature."

VIDEO: On June 9th, 2020, the SB-1 Defiant expanded its flight envelope, achieving 205 knots during testing and surpassing the top speed of the Black Hawk helicopter. Reaching new speeds in low-level flight will be key to providing the U.S. Army the capabilities needed to dominate the multidomain battlefields of the future.

The X2 Technology is also used in the smaller Sikorsky S-97 RAIDER demonstrator, a high-speed scout and attack compound copter that has already proven a maximum cruise speed of 253 knots (291 mph). Test pilot Fell said back in 2019 that the low- and high-speed maneuverability of an X2 Technology flyer -- which can fly at as much as 60-plus degrees of bank -- and the ability to hover in high altitudes and hot conditions "make a helicopter fly more like a tactical jet aircraft than a classic rotorcraft."

The U.S. Army has stated no official date for the downselect of the final, winning design, but fiscal year 2022 has been mentioned in several reports as the soft target. The technological readiness of both designs as well as evolving military budgets will influence the final selection timeline.