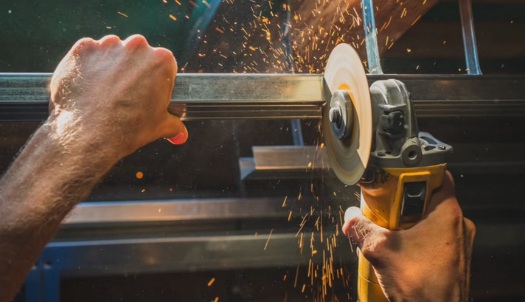 Engineers in England at Durham University and their research partners have created what they say is the first manufactured, "non-cuttable" material. Their unlikely material inspirations? Grapefruit and abalone shell.

The research team, led by Dr. Stefan Szyniszewski, Assistant Professor of Applied Mechanics in Durham University's Department of Engineering, got the idea for the construction of the new lightweight material from the tough cellular skin of grapefruit and the fracture-resistant shells of the abalone sea creature. Combining the cellular structure of grapefruit peel and the Abalone shell's hierarchical structure produced something truly impressive.

The material, called Proteus (after the shape-changing mythical god), could be used in the security and health and safety industries. Other applications are easily imaginable.

The material is made from alumina ceramic spheres encased in a cellular aluminum, metallic foam structure. The way it works is like a clever trick you'd see in a superhero movie: It turns back the force of a cutting tool on itself.

According to a research paper on the work, "Manufacturing steps include mixing metal powder with a small amount of foaming agent. It is followed by pressing the mix and extrusion into preform shapes. The compressed powder bars enable precise placement of ceramic segments in the orthogonal pattern and manufacturing of the end product in an industrial furnace."

The Proteus cylindrical material sample is shown here after angle grinder cutting attempts, with an x-ray transmission image shown to the right. These transmission images form the basis of the CT measurements of the material. [Image courtesy of the researchers]

In tests using cylinders made of the material (150-mm high with a diameter of 60 mm), the Proteus material could not be cut by angle grinders, drills, or high-pressure water jets. When an angle grinder or drill attempted to cut it, the interlocking vibrational connection created by the ceramic spheres inside the casing ended up blunting the cutting disc or drill bit.

The ceramics also fragmented into fine particles, which filled the cellular structure of the material and hardened as the speed of the cutting tool increased.

The researchers say that cutting the material "is essentially like cutting through a jelly filled with nuggets -- if you get through the jelly, you hit the nuggets and the material vibrates in such a way that it destroys the cutting disc or drill bit." 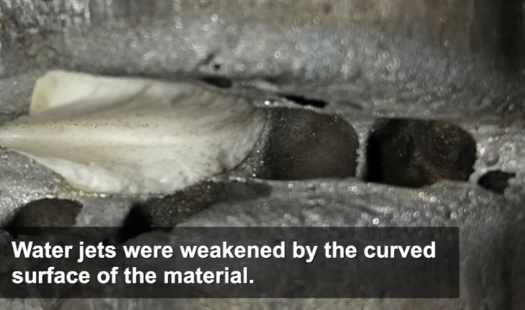 Water jets were also ineffective, because the curved surfaces of the ceramic spheres widened the jet, reducing its speed substantially and weakening its cutting capacity.

The researchers say Proteus could be used to make bike locks, lightweight armor, and in protective equipment for people who work with cutting tools.

The Proteus material was tested against a 10-mm-thick, state-of-the-art armor steel plate distributed by ArcelorMittal under the trade name of Mars 220, which is used in protective structures and military hardware. According to the researchers, the Mars 220 material "was penetrated relatively quickly, within 20âseconds" by the angle grinder. The drill also penetrated all samples of the hardened Mars 220 steel.

VIDEO: First manufactured, non-cuttable material is claimed to be created by a research team headed by Durham University.

More detailed information, including CT scan videos of the material that was attempted to be cut, is available on a special dedicated web page put together by Dr. Szyniszewski. You can access that page here.

The research paper, "Non-cuttable material created through local resonance and strain rate effects," is published in Scientific Reports. It has many more details on the material's creation and testing. We strongly advise taking a look if interested in this material. The paper was published July 20, 2020.

UPDATE/Editor's Note: I did ask Dr. Szyniszewski in a follow-up email if the material was tested against a simple hand saw or hack saw, since this was not mentioned in the paper.

Szyniszewski responded, "We have not tried to cut it with hand saw tools. If it were possible, it would take a very long time. You asked an excellent question.

"We only attempted power tools because they are fast. For slow methods of forcible entry, security cameras or surveillance should alert the police or the security staff. The issue for our sponsor was quick cutting, because then there is not enough time to respond."

Regarding Designfax reader questions about how the material is fabricated, or how it is shaped if it cannot be machined, Szyniszewski said, "One should cast it. Fine-tuning and shape adjustments are possible, because the material is compressible. So it could be cold-formed to some degree or hammered/compressed to fine-tune the size of the component (say to account for real-life tolerances)."

One Designfax reader asked if EDM (electrical discharge machining) could be used to cut the material to shape. Szyniszewski said, "We tried to use a thermic lance, but it took several times longer than armour steel -- and the edges were very rough. Thermal cutting will be very difficult."