Wherever a lot of computing is performed or high currents flow, large amounts of waste heat are generated. That's why Freudenberg Sealing Technologies has developed a material that combines seemingly contradictory properties: It conducts heat well, but it is also electrically insulating. 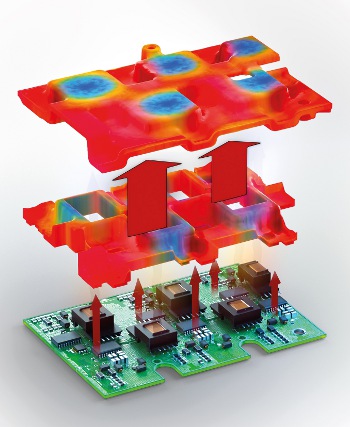 Materials generally combine electrical and thermal conductivity or insulate against both electrical current and heat. The engineers at Freudenberg Sealing Technologies have developed an elastomer that merges relatively high heat capacity with electrically insulating properties by combining silicone rubber with special fillers.

The innovative material is targeted for use primarily in electric car components, since semiconductors and other current-carrying elements are never completely lossless. Any electrical energy that isn't used for computing or switching becomes waste heat that must be dissipated into the ambient air or a cooling system. Electronic components in these applications are usually mounted in a thermally conductive housing (often made from aluminum), which dissipates the heat either via cooling water or convection. The closer the circuit board is positioned to the heat sink, the more efficient the heat transfer. The heat conductivity can be reduced by roughness in material surfaces, even at levels that are invisible to the human eye.

Freudenberg Senior Application Manager Armin Striefler said that silicone, which is Â­rarely used in car manufacturing, was chosen as the base material because it "retains its properties over a very high temperature range, from -50 to 250 degrees Centigrade, but it can be deformed with relatively low force."

When sprayed on a metal surface, it fills the tiny gaps caused by roughness, which not only improves the heat transfer but also enables adhesion without additional surface treatments. The material developed by Freudenberg has a high dielectric strength of at least 20 kilovolts (kV) per millimeter. Adding the fillers increases the heat conductivity from 0.2 to 1.5 to 2 watts (W) per meter kelvin. As a comparison, air has a heat conductivity of 0.026 W per meter kelvin under normal conditions. The fillers themselves are special metal compounds; knowing how to combine and process them is part of Freudenberg's expertise.

Prospective uses for electric cars
The first series application for this new material class could lie in the charging socket of electric vehicles. This is where car manufacturers face a challenge: To rule out possible malfunctions, the charging current must be monitored directly at the socket through continuous temperature measurements. However, the temperature sensors also have to be electrically shielded to prevent short circuits.

One solution is that, just like the pin holders, the temperature sensors are overmolded with thermally conductive silicone from Freudenberg. In the same molding press, the underlying connector plate is also molded of standard thermoplastic to create a single, mountable component. The first prototypes for the charging socket with integrated sensors are already being tested by a car manufacturer.

This material can also be used for the targeted cooling of control units, such as those used to switch the current between the battery and drivetrain of an EV. While the power electronics are cooled through the aluminum housing, the heat emitted by the electronic components generally radiates only into the air between the circuit board and the housing wall. This is where the benefits of the silicone fully come into play: It can be produced similar to any three-dimensional molded part, thus enabling direct contact between components, even if these components are usually positioned at different heights. This allows the heat flow to dissipate directly into the housing. An initial application in the battery control unit of a hybrid commercial vehicle is already being tested.

Freudenberg's thermally conductive elastomers also open up new opportunities for batteries, the core elements of every EV. During rapid charging or when high performance is required while driving, the busbars used to connect battery modules and power electronics produce a relatively large amount of waste heat. The engineers at Freudenberg Sealing Technologies are now focusing on a module in which the thermally conductive silicone dissipates the waste heat from the busbars directly to the housing or a heat sink. This could reduce the conductor cross-sections to such an extent that only about 50% of the normally used copper would be required. The easy-to-install module also includes the plastic carrier for the busbars overmolded with the special silicone, in which the sockets for the screw connections are already integrated. The first functional prototypes are expected to be tested this year.

"We're still in the beginning stages of applying the thermally conductive elastomers," said Joachim Heinemann, technical director of Special Seals at Freudenberg Sealing Technologies, "but we can already see that the combination of thermal conductivity and electrical insulation has great potential to make future generations of electric cars more efficient."