General Motors will be the first automaker to use an almost completely wireless battery management system, or wBMS, for production electric vehicles. This wireless system, developed with Analog Devices, will be a primary driver of GM's ability to ultimately power many different types of electric vehicles from a common set of battery components.

The wBMS is expected to drive GM's Ultium-powered EVs to market faster, as time won't be needed to develop specific communications systems or redesign complex wiring schemes for each new vehicle. Instead, the wBMS helps to ensure the scalability of Ultium batteries across GM's future lineup, encompassing different brands and vehicle segments, from heavy-duty trucks to performance vehicles. 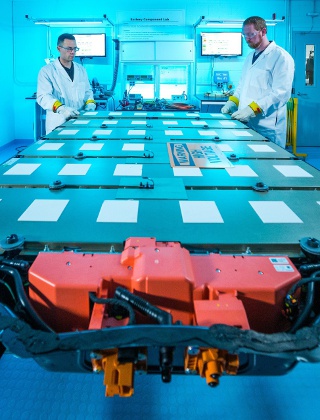 Much like the pack design of GM's Ultium batteries, which is flexible enough to incorporate new chemistry over time as technology changes, the wBMS' basic structure can easily receive new features as software becomes available. With expanded over-the-air updates provided by GM's all-new Vehicle Intelligence Platform, the system could even be upgraded over time with new software-based features via smartphone-like updates.

"Scalability and complexity reduction are a theme with our Ultium batteries -- the wireless battery management system is the critical enabler of this amazing flexibility," said Kent Helfrich, GM executive director of Global Electrification and Battery Systems. "The wireless system represents the epitome of Ultium's configurability and should help GM build profitable EVs at scale."

The wBMS will help GM's electric vehicles balance chemistry within the individual battery cell groups for optimal performance. It can also conduct real-time battery-pack health checks and refocus the network of modules and sensors as needed -- this helps safeguard battery health over the vehicle's lifespan.

By reducing wires within the batteries by up to 90 percent, the wireless system can help extend charging range by creating lighter vehicles overall and opening extra room for more batteries. The space and flexibility created by this reduction in wires not only enables a cleaner design, but also simpler and more streamlined battery restructuring as needed and more robust manufacturing processes.

This wireless system also provides a unique repurposing capability for battery reuse in secondary applications more easily than conventional wired monitoring systems. When the wireless packs are capacity-reduced to the point where they are no longer ideal for optimum vehicle performance, but still functional as consistent power supplies, they can be combined with other wireless battery packs to form clean power generators. This can be done without a redesign or overhaul of the battery management system traditionally required in second-life usage.

GM's wireless battery management system is protected by cybersecurity measures that are foundational to the company's all-new electrical architecture, called the Vehicle Intelligence Platform. The DNA of this system includes protective features within the hardware and software layers, including protection of wireless communications.

The wireless battery monitoring system will be standard on all planned GM vehicles powered by Ultium batteries.