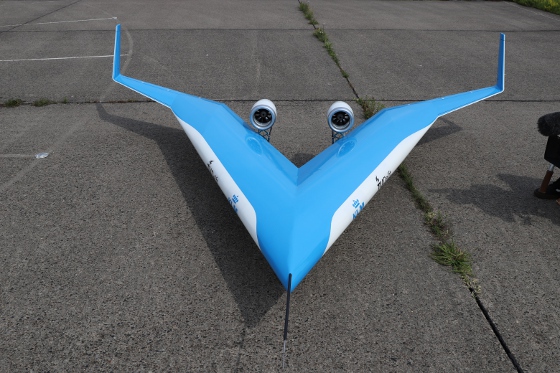 The electric-powered Flying-V test model (shown here) has a wingspan of 3 m. The aircraft's unique blended-wing design, once full-size, would have passengers fly inside the wing structure itself. [All images courtesy KLM/TU Delft]

A 1:20-scale model of an experimental plane design called the Flying-V successfully completed its first flight this summer. The aircraft's energy-efficient design integrates the passenger cabin, the cargo hold, and the fuel tanks in the wings. It wasn't all smooth sailing for the TU Delft university Dutch team who created the technology and performed the tests in Germany, but things are certainly looking up.

Computer calculations have predicted the aircraft's improved aerodynamic shape and lighter weight could reduce fuel consumption by 20% compared to today's most advanced aircraft. Airline KLM has been a partner in the project since 2019 and has been critical in helping to build the scale model. As a full-size aircraft, it will carry the same number of passengers as the long-range, twin-engine, wide-body Airbus A350. What's really different (besides the obvious blended wing), is that passengers will fly inside the wing structure itself. 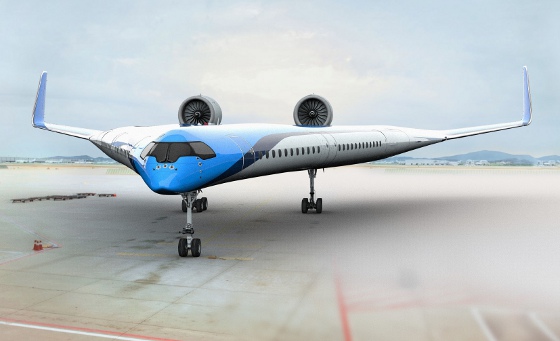 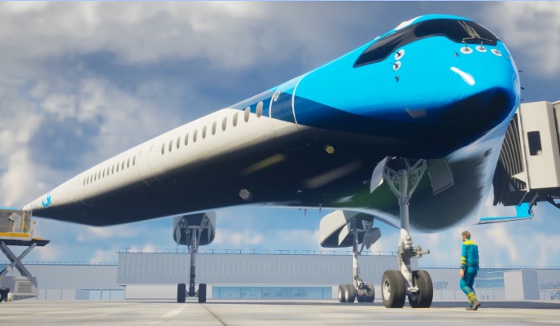 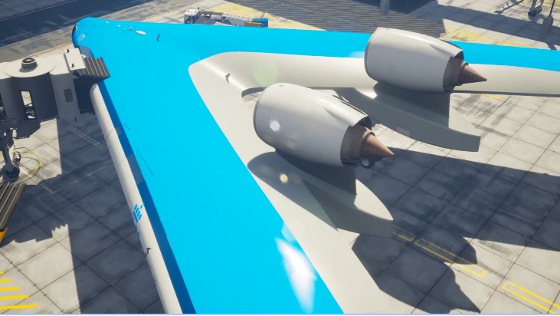 Concept sketches show the unique design of the Flying-V aircraft.

Various other business partners are now involved in the project, including Airbus. Airbus was also a supporter for the first flight. The partners are working together on a research plan to fine-tune the concept.

After a period of extensive wind tunnel testing and a series of ground tests in the Netherlands, it was finally time to perform the first flight for the composite model, which at 3 m wide is 4.6% the size of the envisioned real aircraft. The 22.5-kg (50-lb) test vehicle, which uses two 4-kW electric "ducted fan" engines, was taken to an airbase in Germany, where the TU Delft researchers could work with a team from Airbus. The pilot's task was to execute a successful takeoff, fly a number of test maneuvers and approaches until the batteries were nearly empty, and land.

"One of our worries was that the aircraft might have some difficulty lifting off, since previous calculations had shown that 'rotation' could be an issue," said TU Delft project leader Dr. Roelof Vos. "The team optimized the scaled flight model to prevent the issue, but the proof of the pudding is in the eating. You need to fly to know for sure." Rotation on takeoff, which is the speed at which control inputs can be applied to lift the nose off the runway, was performed easily and occurred at a speed of 80 km/h (50 mph). The plane's thrust was good, and flight speeds and angles were as predicted. 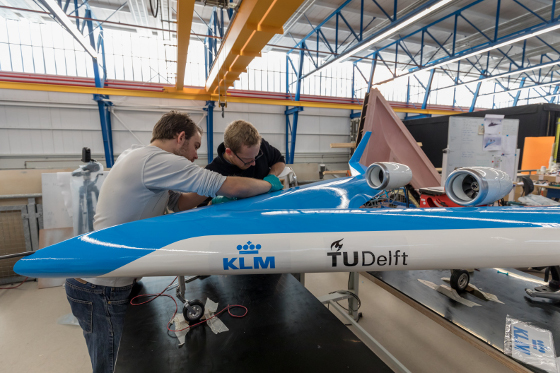 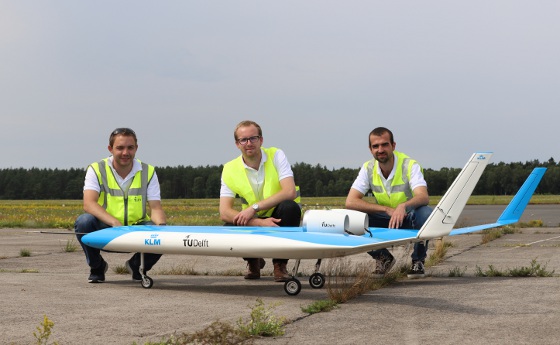 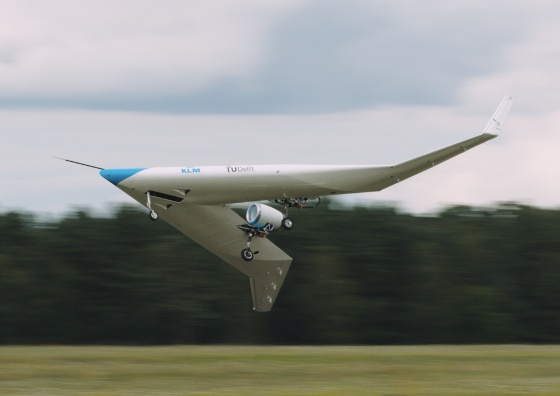 The tests were not without their challenges. The team had to change the center of gravity of the aircraft and fix the antenna to improve telemetry. The flight test also confirmed that the current design still shows too much "Dutch roll," causing a slightly rough landing. A next step for the team is to use the data collected during the flight for an aerodynamic (software) model of the aircraft. This will make it possible to program it in a flight simulator to be used in future research, while further improving the flight characteristics. The team will also prepare the scale model for future flight tests.

More about the Flying-V full-size plane design
"Radically new and highly energy-efficient aircraft designs such as the Flying-V are important," says Henri Werij, dean of the Faculty of Aerospace Engineering at TU Delft, "as are new forms of propulsion. Our ultimate aim is one of emission-free flight. Our cooperation with KLM offers a tremendous opportunity to bring about real change."

The concept plane is not as long as the A350, but it does have the same wingspan. The designers say this will enable the Flying-V to use existing infrastructure at airports, such as gates and runways, without difficulty, and the aircraft will also fit into the same hangar as the A350. It will also carry the same number of passengers (314) and the same volume of cargo, 160 m3. But the Flying-V will be smaller, overall, than the A350, giving it less aerodynamic resistance.

The Flying-V project provides researchers a unique opportunity to improve passenger experience in aircraft, from the seating layout in the wings to the design of the seats and bathrooms. For this project, everything has to be as lightweight as possible in order to maximize the efficiency gain the new aircraft shape provides. Passenger comfort will also be taken into account.

The developers are keeping their propulsion options open too. Conceptually, the Flying-V would be propelled by the most fuel-efficient turbofan engines that currently exist. In its present design, it still flies on standard jet fuel, but the designers say it can be adapted easily to make use of electrically boosted turbofans or other, more efficient propulsion systems in the future -- even including hydrogen.

In a video interview by Bloomberg TV posted June 3, 2019, KLM's president and CEO, Pieter Elbers, addressed the company's commitment to sustainability and backing developmental and experimental projects. Elbers said the company has already invested in a bio-fuel factory that will be built in the Netherlands, for one.

"We will not build aircraft. Neither will the university," said Elbers. "When it would come to a real design, it has to be by the manufacturers."

"But what I would like to do, in fact, is to reach out to all the parties," said Elbers, "and say 'Hey, this (sustainability) is an industry problem. How do we work together on this?'" Elbers also said he considers sustainability and the technological innovations to come "a licence to grow" for the airline industry as a whole.

Elbers estimated it may take until 2050 to see such a design as the commercial passenger Flying-V come to fruition.

See more details of the flight tests at www.tudelft.nl/en/ae/flying-v/.