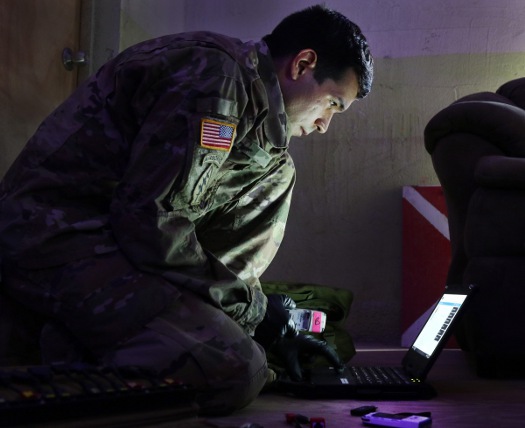 Of ever-increasing concern for operating a tactical communications network is the possibility that a sophisticated adversary may detect friendly transmissions. Army researchers have developed an analysis framework that enables the rigorous study of the detectability of ultraviolet communication systems, providing the insights needed to deliver the requirements of future, more secure Army networks.

In particular, ultraviolet communication has unique propagation characteristics that not only allow for a novel non-line-of-sight optical link, but also may be harder for an adversary to detect.

"While many techniques have been proposed to decrease the detectability of conventional radio-frequency, or RF, communications, the increased atmospheric absorption of deep-ultraviolet wavelengths implies that ultraviolet communication, or UVC, has a natural low-probability-of-detection, or LPD, characteristic," Drost said. "In order to fully take advantage of this characteristic, a rigorous understanding of the LPD properties of UVC is needed."

In particular, Drost said, such understanding is essential for optimizing the design and operation of UVC systems and networks and for predicting the quality of the LPD property in a given scenario, such as using UVC to securely network a command post that has an estimate of the direction and distance to the adversary.

Without such a predictive capability, he said, users would lack the guidance needed to know the extent and limit of their detectability, and this lack of awareness would substantially limit the usefulness of the LPD capability.

The researchers, including Drs. Mike Weisman, Fikadu Dagefu, Terrence Moore, and Drost from CCDC ARL and Dr. Hakan Arlsan, Oak Ridge Associated Universities postdoctoral fellow at the lab, demonstrated this by applying their framework to produce a number of key insights regarding the LPD characteristics of UVC, including:

Comparison of wavelength, frequency, and energy for the electromagnetic spectrum. [Credit: NASA's Imagine the Universe]

Prior modeling and experimental research has demonstrated that UVC signals attenuate dramatically at long distance, leading to the hypothesis that UVC has a fundamental LPD property, Drost said. However, there has been little effort to rigorously and precisely quantify this property in terms of the detectability of a communication signal.

"Our work provides a framework enabling the study of the fundamental limits of detectability for an ultraviolet communication system meeting desired communication performance requirements," Drost said.

Although this research is focused on longer-term applications, he said, it is addressing the Army Modernization Priority on Networks by developing the fundamental understanding of a novel communications capability, with a goal of providing the Soldier with network connectivity despite challenging environments that include adversarial activity.

Another key effort involves the experimental characterization, exploration, and demonstration of this technology in a practical network using ARL's Common Sensor Radio, a sophisticated mesh-networking radio designed to provide robust and energy-efficient networking.

According to Drost, the work is also an on-ramp to studying how ultraviolet communications and other communications modalities, including conventional radio-frequency communications, can operate together in a seamless and autonomous heterogeneous network, which the researchers believe is needed in order to fully realize the benefits of individual novel communication technologies.

As they make continued progress on these fundamental research questions, the researchers will continue to work closely with their transition partner at the CCDC C5ISR (Command, Control, Computers, Communications, Cyber, Intelligence, Surveillance, and Reconnaissance) Center to push ultraviolet communications toward nearer-term transition to the warfighter.

This work is featured in a paper, "Analysis of the low-probability-of-detection characteristics of ultraviolet communications," which the Optical Society's peer-reviewed journal, Optics Express, recently accepted for publication.